This is the second to last look-back post celebrating the DECADE I’ve been blogging about golf here at Hooked On Golf Blog.  Below are some quick comments including links to the original golf blog posts, featuring some key nuggets from the years 2010-2012.

I took on a new job as National Sales Manager for the high end golf accessory company Sumi-G.

I handed over the Battle of the Golf Blogs crown to the Orlando Golf Blogger in Orlando at the PGA Merchandise Show.

“Speed” is the year’s buzzword for marketing golf clubs.  It’s always something.

I attend the Puerto Rico Open.

I’m the first to break the news on the new TaylorMade R15 SuperMegaQuad Driver.  See image:

I attend my first Masters practice round.  Here are some Masters photos you don’t see on TV.

I was asked to remove my photos of the TPC Sawgrass Yardage Book.  Lame.

I got married.  Golf babes worldwide go on suicide watch.

I added the “How Not To” category to the blog.

Possibly my most detailed and best review ever was the Potty Putter.

My dad and I win the Father’s Day tournament!

I visit the fabulous Gran Melia resort in Puerto Rico.  That did NOT suck.

HOG gets a NEW LOGO!  Big doings ’round here.

I put a new putter in the bag, Dornoch Putters by Grant Mackay.  The Putter is STILL in the bag.

“Cigar Guy” is the biggest rage on the internet for 2010.

Unfortunately in January I separated my shoulder skiing.

The Japan earthquake and tsunami made it hard to think about golf.

June and into July was perhaps the most insane HOG schedule in history.  In 1.5 months I played in the Salt Lake City Amateur tournament, went to St. Andrews, played the Mesquite Am, played 72 holes in one day in four states, and traveled out of town to no less than 15 golf courses.

People freak out because Bubba Watson wears a $525K watch which was loaned to him by watch sponsor.

Tiger Woods puts his yacht “Privacy” up for sale for $20 million. My attempts to get 20 million people to each chip in $1 and buy it with me fail.

I interview Fred Funk.  What a cool cat.

Rory McIlory blew a huge lead in the Masters, but handled the loss with class.

Rookie Keegan Bradley records first win of PGA Tour career at the HP Byron Nelson and I WAS THERE.  Shot the picture below: 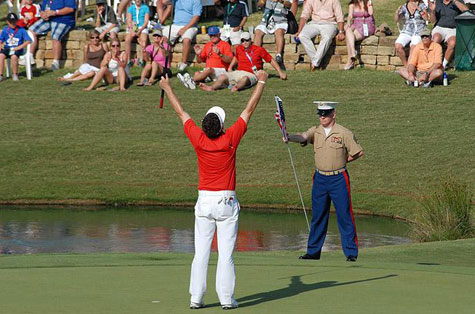 HP invites me to cover the HP Byron Nelson Championship as resident blogger and social media expert.  What a blast.

Golf world saddened as legend Seve Ballesteros died at the young age of 54.  RIP Seve.  You will be missed and always remembered.

Rory McIlroy destroys the field at the US OPEN shooting 16 under par and blowing away Tiger Woods previous US OPEN record score of -12.  McIlroy set a number of records which may never be broken.  I doubt Congressional will hold another major.

Me and my son Seve

The biggest news of the YEAR for me was the birth of my son Seve Anthony.  Yes, his name was inspired by Seve Ballesteros.  Little Seve has been nothing but a joy.  SO thankful.

On a sad note, I lost a golf buddy who I’d played 100’s of rounds of golf with.  RIP Dave Shields.

I got to tour Golf Channel’s facilities, and even get a shot of myself behind the Golf Central desk.  Fun stuff.

I played 112 consecutive holes with one Callaway Hex Black golf ball.  The people at Callaway thought that feat was so cool they sent me a whole box of them, or the equivalent of 1,344 holes. 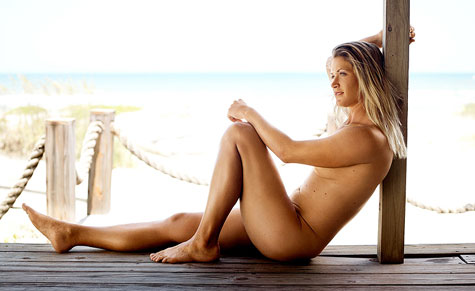 Miguel Angel Jimenez, the wine drinking-cigar smoking golfer from the European Tour, broke a leg skiing.  Fortunately the cigar made it unscathed.

The last and final Q-School EVER, graduated to the PGA Tour.