I was stuck in my office for the first two rounds of the Open Championship with only a pair of headphones and an internet connection to keep me in tune with the happenings. It was actually quite enjoyable to listen to the Open’s radio crew, a nice perspective from some fine chaps. I’d much rather have this commentary than american golf announcers.

Television coverage here in the USA of the Open was okay. Fortunately less of the golf-unknowing ESPN announcers were on the call this time around. One announcer, I think Scott Van Pelt, was so informative in letting me know that Rory McIlory was hitting an iron off the tee. Yeah, like I couldn’t see that myself. Thanks man.

One thing they did manage well was not covering Tiger, who was not a factor at any point. So for that I’m thankful. The one bit of Tiger coverage I did see was him digging in a gorse bush!

Why not start my player commentary with the winner? McIlory’s ball striking was “on” this week. When he is on, nobody on the planet can beat Rory in my opinion, not even Tiger at his best. Rory’s swing is a thing of beauty when his timing is great, like this week. After the first two 66’s I thought we were in for another lapping of the field like in Rory’s U.S. Open and PGA Championship wins. He did make it interesting by not going much lower on Sunday, combined with Sergio Garcia making a run.

I was a Tiger fan, call me a bandwagon jumper if you want, during his peak and I’m certainly a Rory fan now. I guess I’m a fan of good golf when it comes down to it.

I was very impressed and happy for Rory. Well played young lad.

I posted last week the question, “will Tiger Woods make the cut?” I asked it because I had doubts that he would, while others were asking whether he would win. In fact, Tiger did barely make it with a birdie on the 18th Friday to hit it on the number.

Tiger’s first round 69 was a good round, but one good round does not a tournament make. He followed up the 69 with rounds of 77-73-75 and finished 4th from last place.

Tiger is not “back,” at least not yet. His finish this week moved him down in the world rankings from #7 to #9. Realistically, he’s not playing even top 50 golf right now.

Two-time Masters champ Bubba Watson missed the cut and was apparently not polite to the fans and not complementary to the course or event. See this article: http://www.golf.com/tour-and-news/bubba-watson-2014-british-open

Somehow I’ve become a semi-fan of Ian Poulter. I dig his candidness and honesty on his social networks. He wants to be a world class player. I’m sure he’d be the first to admit that his performance in the majors isn’t up to what he aspires to. Perhaps he needs to pretend it is the Ryder Cup?

Perhaps the most disappointing cut missed was Miguel Angel Jimenez. The color and fun he adds to an event is unmatched. Someday I hope to meet him and smoke a cigar with him!

Perhaps the major train has left the building for Westwood?

Luke Donald was once ranked #1 in the world. His performance in majors is awful. It has to be all in his head. His golf swing is so good.

Guess what player is the only one in the Open to have shot all four rounds in the 60’s? I’ve poked a lot of fun at Rickie Fowler and his traffic cone orange outfits he wears on Sunday, but he has gained total respect from me in the majors this year. He has been right there, quite close to breaking through. It may just be a matter of time before he gets his first major win.

Speaking of Sergio Garcia, he put on quite a run Sunday. He put some pressure on Rory. I think he was far enough back that he didn’t feel any pressure.

The cynic in me says Sergio will never win a major, but maybe I’m still ticked at him for the spitting in the hole incident many years ago.

Phil Mickelson made the cut and finished a solid tie for 23rd. Not much going on for Phil this week, except some fun videos of him hitting flops shots at the Scottish Open the week before.

Royal Liverpool looked soft and green, not exactly the “links” golf conditions I’d hoped for. Players were actually backing up shots, which on a links course is not common.  There was very little wind, and a tiny bit of rain on Saturday. The course had no teeth, producing 45 players with under-par scores.

I’m sure it is a great links course, but this week Royal Liverpool was a little too easy in my opinion. A little more solid wind would have made the event a little more riveting.  Mother nature failed on this one.

Now that the Open is over my heart is a little sunk. The golf season is ¾ of the way over, for the pros and for myself. Winter will be coming here and pretty soon I’ll be staring out the window at snow on the ground.

Guess I’d better get in as much golf as I can between now and then.

Opening the Fridge or Winning the Masters

Today’s apparel script features the Oakley “Delta” Polo.  I was quite comfortable in my regular business capacity today, and caught a selfie opening the fridge.  You may recognize this shirt as the same one Bubba Watson was wearing during the final round when he won the 2014 Masters Tournament. 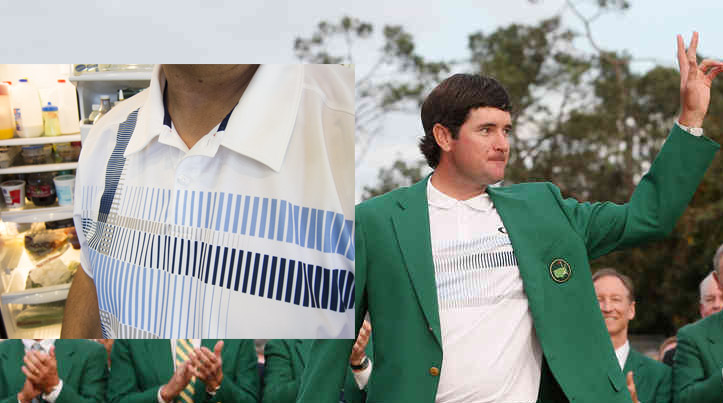 Bubba wears the shirt winning the Masters.  I wear it opening the fridge.  Both great accomplishments in our own worlds.

Stay tuned for my full review of the Oakley Delta Polo after I’ve had a chance to test it out on the golf course.