Dozens of times I’ve started reviews like this one.  This is another case of “being a top golf blogger does not suck.”  Today’s “tough” job is to post a review of the new Cobra Golf Amp Cell Irons.  Yes, hurt me. 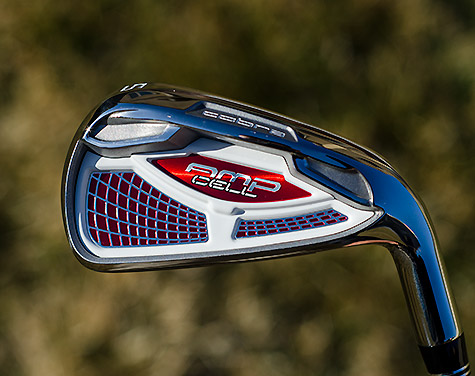 Cobra’s Amp Cell Irons are cast irons with a cavity back and a bit of muscle in the lower back of the head.  The specs on their website don’t mention it, but there’s a small offset through the set, which will help most amateur golfers avoid the slice or unwanted fade.

In Cobra style, the clubs are available in four colors.  The back of the club head as well as the grip are accented in blue, Rickie Fowler orange, red (this review), or silver.

In the bag: Cobra Amp Cell Irons in Red (for the Utah Utes!) – click to see larger version

Amp Cell Irons are made more like a driver than an iron.  The faces of the irons are made like metal wood faces, welded on.  This process by Cobra is called E9 Face Technology.  The result is a high COR (coefficient of resistance), lighter weight and more forgiveness.  In english, longer, straighter, easier to swing.

The face of the club has some very fine milling for control and spin.  Click the photo to the right to view the larger version and you’ll be able to see what I’m talking about.

The weighting of this iron is distributed via “cells” to the perimeter of the head.  Perimeter weighting makes the club easier to hit, promotes high launch for more distance, and puts the CG (center of gravity) right where it needs to be behind the sweet spot.

These clubs are likely targeted toward a low-mid to high-mid handicap player.  That being said, I played them well as a 2 handicap and so did my buddy who is a 13.

Like most modern irons, the Amp Cell’s are strong in their lofts.  In many cases the lofts are 3-4 degrees stronger than irons of 10 years ago.

The first adjustment I had to make with the Amp Cells was because they’re so light.  I found it easy to swing faster, no doubt.  The problem though, is that can change the timing of my swing.  So I had to be sure to concentrate on a good swing tempo and bringing the club back nice and smooth.

The Amp Cells deliver on forgiveness.  Shots which were not quite on the sweet spot didn’t lose much distance, just as Cobra advertises.

Distance when hitting the sweet spot was, shall we say, deep.  On the par-5 13th during the first round I tested these babies I hit a 6-iron from the right rough.  I took an aggressive line over a hazard and landed the green some 195 yards away.   The result was an eagle putt.  No I didn’t make the putt for eagle, but the 2″ tap-in birdie was easy on the confidence.

One of my playing partners demoed the irons as well.  He’s a senior player who won the club championship last year.  He doesn’t hit it far but he’s deadly accurate.  His accuracy with the Amp Cells was spot on, as was his distance control.  The light weight of the clubs matched his slower swing well, despite the shafts bing stiff in flex.