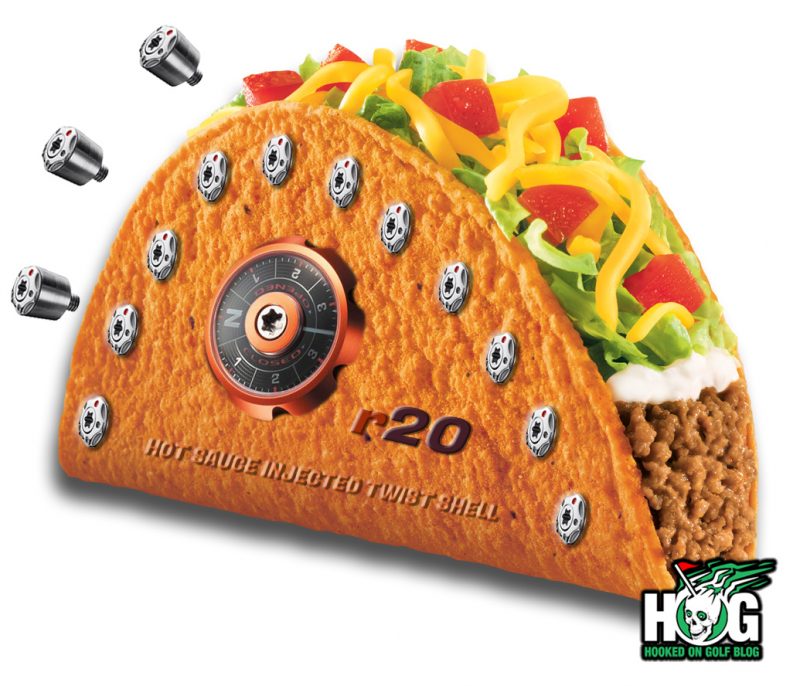 Perhaps Golf Driver Adjustments Have Gotten Out of Hand?

Here’s the latest driver from Taylormade, the M5. The M in the name stands for “Mixer.” This driver’s inspiration comes from the audio mixing console, like you see at big concerts and stuff.

Golfers will be able to adjust the usual driver properties like loft, face angle, lie, and so on.  New adjustments will include parametric filters on several different bands, balanced and unbalanced inputs, high and low pass filtering, inline compression with hard and soft knee adjustments, effects inserts (adding a plugin type architecture for 3rd parties to develop their own “driver APPS”), noise gating, tube pre amplification, dynamic range expanders, and a bypass button for when the adjustments get so crazy you need to turn them all off.

Perhaps this is the the peak of the adjustable driver era?  I’m not sure there are many more ways we can adjust these things.  Statistically all these club adjustments over the years have had NO effect on amateur golf scores, which have not improved in decades.

Hooked On Golf Blog insiders have sent me a photo of the newest, LONGEST DRIVER EVER. This unique driver is an industry first, with three golf companies teaming up and implementing all of their technologies together.  TaylorMade, Cobra Golf, and Parsons Xtreme Golf (PXG) will soon be releasing the KINGPXGM1-MEGA driver, guaranteed to be the longest driver ever created.  It is longer than the longest long one….. ever.  Featuring newly co-developed “RFL” technology, this driver is REALLY EFFING LONG! 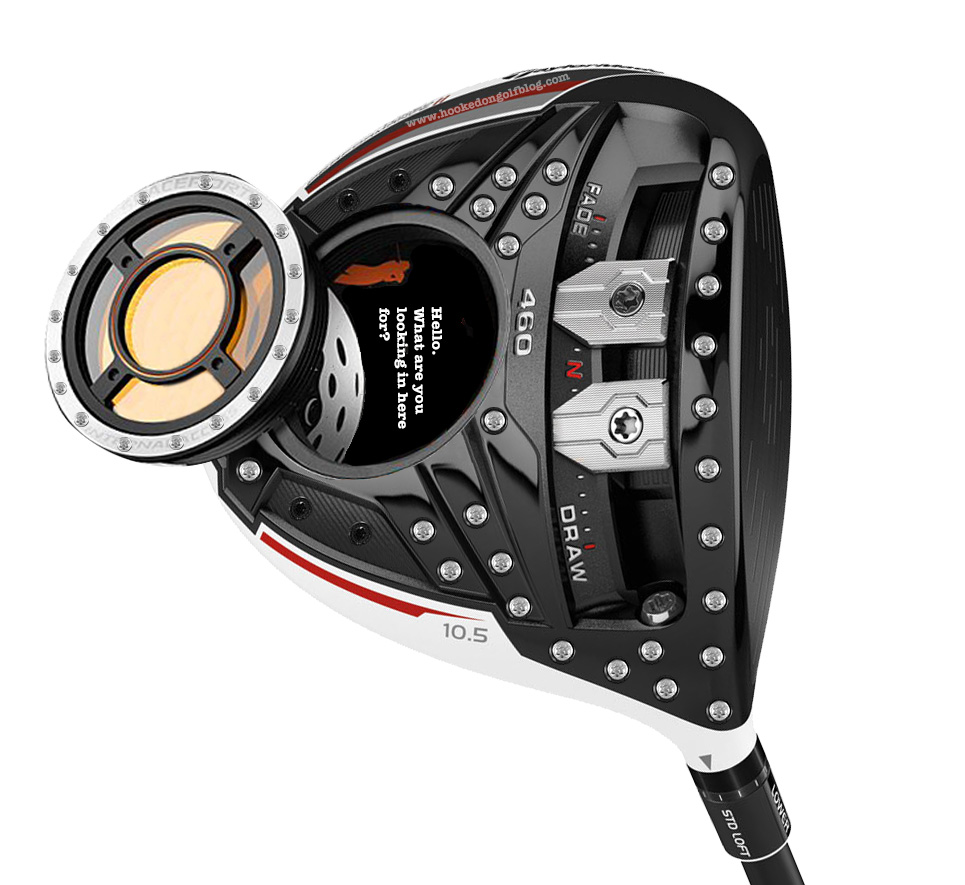 The release date is yet unknown.  When more details become available I’ll post right here at Hooked On Golf Blog.

This is the second review of three TaylorMade golf ball models I’m in the process of reviewing.  The first was the Project (a) ball, a ball designed more for amateurs with slower swing speeds.  This review features the TaylorMade Tour Preferred golf ball.  The “TP” is a “tour” level ball, meaning their highest performance and most expensive.  This is one which many TaylorMade PGA Tour players use, and for good reason.  Let’s take a look. 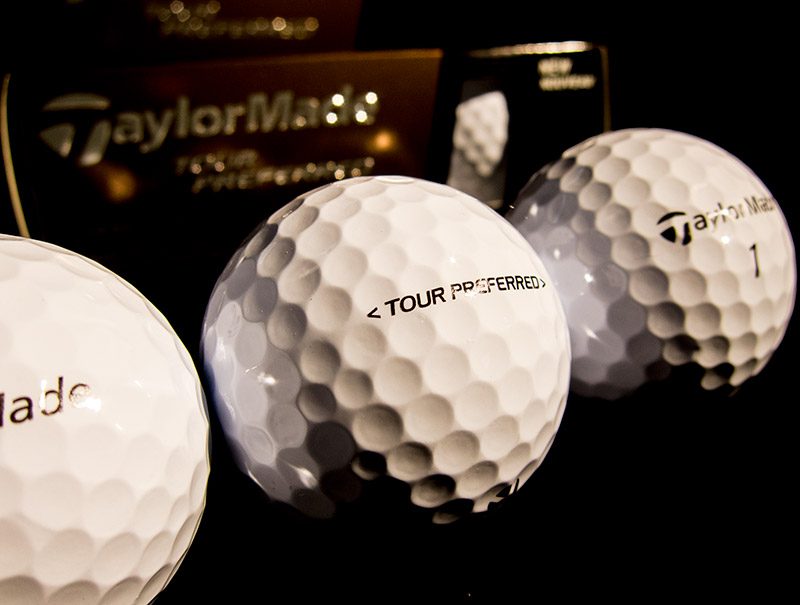 The Tour Preferred ball is a four layer ball.  Each layer features materials and engineering which give the ball specific performance characteristics.  For instance, the core may provide the primary distance of the ball while the outer layer or cover provides much of the ball’s feel and spin.   Most tour balls, the Tour Preferred included, have a urethane cover which provides the softest and best spin in the sort game.

Together these layers and their engineering produce the following performance characteristics in the TaylorMade TP ball:

These characteristics are slightly different than the Tour Preferred X ball, which I will be reviewing soon.  The difference between the two is that numbers two and three above are swapped.  The X ball has medium mid- to long-iron spin and medium-high short iron and wedge spin.

I don’t do TrackMan or FlightScope testing on my golf balls and clubs, just real world golf on real golf courses.  If you need to know the exact spin rate off a 9-iron at X miles-per-hour swing speed with x-launch angle, there are other sites full of that information.  Google it.

Off the tee the TP feels very solid and I can hit it as far as just about any other ball I’ve tested.  I can feel the ball compress and I’m able to work the ball as needed, though my swing lately seems to only want to go straight or draw.  Don’t ask me to hit a fade right now.   I’ve hit a few massive drives (for me), and even some massive 3-woods with this ball.

Iron feel of the TP is excellent.  The ball is soft enough for me to feel it on the face and tell if I’m clipping it just right, compressing it.  Those pure shots produce pure results and birdie opportunities.

Inside 100 yards (admittedly my weakest link) I have plenty of spin.  Sometimes I can actually clip the ball to crisply when pitching or chipping and it will check too much.  That’s not the ball’s fault.  It the fault of my skill level, short game distance control.

Lastly, the fee of the putter is great.  The cover feels soft and I have total distance control with the flat stick.

Not Just For Tour Players

Over many years one of the main reasons amateurs were not well off hitting “tour” balls is because of the compression of the ball and maxiumum distance.  High swing speeds were needed to get full compression out of them.  That does not seem to be the case with the TP ball.  I have a driver swing speed of about 100MPH, and 105 if I’m really killing it.  With the right driver head, shaft, and this ball, I can hit them quite far.  I don’t feel like I’m losing distance with the TP due to not having a high enough swing speed.

The other component to “tour” balls is the high spin.  The engineering of this ball gives the player, amateur or pro, the high spin where it is needed in the shorter irons and short game.  So once again, an amateur could benefit from playing this ball.

Whether you are an amateur or a pro, the TaylorMade Tour Preferred golf ball is a high performance option.

Soft golf balls are the rage right now.  That’s great for me as they don’t aggravate my tennis/golfer’s elbow and my driver swing speed is around 100mph.  The problem with many of the softer balls which have been produced over the last few years is that they don’t have good spin characteristics in the short game end of things.  That’s where balls like the TaylorMade Project (a) are filling the gap.  The (a) in the name stands for “amateur.”  The ball is designed for amateur swing speeds but has a cover design and materials which produce “tour” level spin and feel in the short game.

The Project (a) is a 3-piece ball, meaning it has three separate layers.  Each layer gives the ball certain performance characteristics.

Most “tour” or high quality golf balls feature a thin cover made from a material called urethane.  Urethane is found in the covers of nearly every great golf ball, but not often found on the covers of amateur balls.  The Project (a) ball does feature a soft urethane cover.  This is what gives this ball far more spin from 30 yards an in than most mid-level amateur golf balls.

The next layer is the mantle layer. This layer also contributes to the ball’s short game spin.

The innermost layer, called the core, is the powerhouse of the ball. The core gives the ball its distance and feel on full shots, and especially off the driver.

My unscientific and rough measurement of the ball’s compression via a very cool golf ball compression measuring tool called the Hexcaliber, shows the ball to be just above a 90.

In the “old” days tour swing speeds matched up with balls having 100 compression or higher. Amateur golf swing speeds were between 85-100, and women’s balls around 80 compression. These days there are many balls in the 80 range, and even some down at 50 or less.

Hands-On – On The Course

I’ve quite enjoyed my testing rounds with this ball. The elbow feels great. Harder golf balls beat up my golfer’s elbow, which is why I can’t play them.  No issues with this softer ball.

The compression level of this ball works well with my very amateur swing speed.  I have plenty of distance.  Plenty.  Like I mentioned, I top out at around 100mph but can get it up to maybe 105 if I’m swinging hard.

The feel the ball has on iron shots is great.  I can feel the ball compress and I can sense the control I have when working the ball either direction or trying to control my “traj” (trajectory).

As advertised this ball is great from not only 30 yards and in, but I’d say from 100 yards and in.  Short game is my achilles heel but I’ve had success chipping and pitching with this ball and getting that little bit of bite around the greens.

I’ve found the TaylorMade Project (a) golf balls on Amazon for under $32 per dozen, which is close to half the price of some “tour” balls.  And for the amateur this ball may be better than those more expensive balls due to the slightly lower compression.  The cover is the same.

If you’re a regular golfing Joe with an average swing speed who needs an affordable high performing golf ball, the Project (a) could be the ticket.  These could also be good balls for some of the better lady golfers.

Father’s Day is coming up by the way.  A box of TaylorMade Project (a) golf balls would make a great Father’s Day golf gift.