Yesterday I had my regular Wednesday league, 9-holes.  I played fairly solid up until I got in a bunker on the 6th and ended up turning that into a double-bogey 5.  Score wrecker.  The sand at Bonneville is very strange.  It’s very light but also very large grains.

The front nine of 2:50 (lame yes) ended at 7:20pm.  I headed to the back nine with my push cart knowing sunset is 8:30.  I thought I’d play a few holes until sunset and bail.  On the 13th tee the thought of finishing the whole 18 started to make sense, so I decided to jog some holes.  Admittedly, I’m not in the best of shape.  I could stand to dump a few extra LB’s and the most exercise I’ve gotten in the last 10 months is clicking a mouse button.  I jogged three holes. 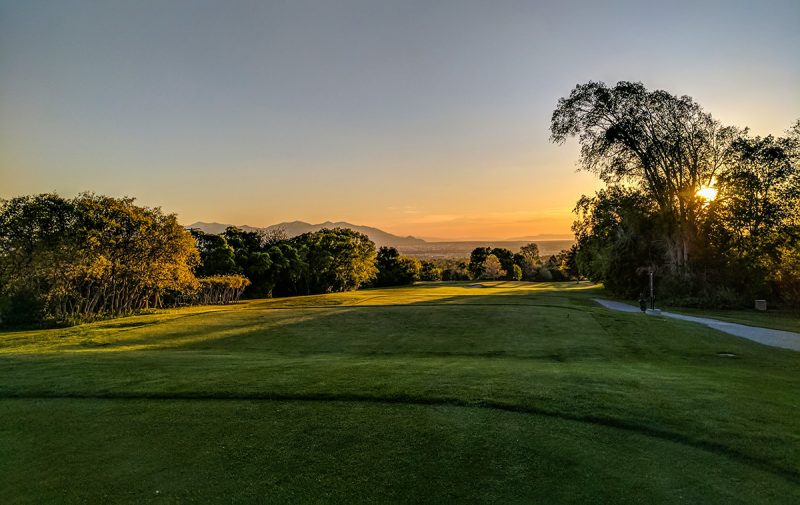 I actually played very solid golf on the back at a hurried pace, all by myself.  My first bogey on the back was the 460 yard par-4 18th.  But before I got there I did some practice bunker shots on the par-3 17th which has a bunker I’ve yet to get out of his year.  Same weird large-grained poofy sand.  I tried numerous clubs and techniques from blasting an open 56 or 60 to squaring up a 52 and chopping down.  Either I would blade the shots because the club bounces so easily, or I’d poof completely under the ball and advance it two feet into the bunker face, where it would bury.  After about 20 different attempts I tried a completely unorthodox theory.

I took my pitching wedge and squared up the blade.  I put my feet close together like I was going to hit a simple pitch or chip.  I did a small chip swing and voila, ball goes out of bunker onto green.  I tried it again and got out again.  Tried it a 3rd time and put it close to the flag.  On the 4th time I made a video (very poor quality, sorry about that).  By this time it was past sunset and quite dark.

I was very sore and dehydrated today after walking 18 on a very hilly course, and deciding to jog three holes in a row.  But playing that back nine alone with the whole course to myself was quite a zen moment; the best time I’ve had playing this year.

Even with a stop to practice bunker shots I played the back nine in 1:20.  That kind of golf I can get into.  5-6 hour rounds not so much.

I just played my first round of golf for 2017.  I played okay, considering I haven’t played since November.  Four months.  I did prove one theory I had, which is I can basically shoot 80 or break 80 will little to no practice or even not playing for months, simply relying on basic ability.  I shot 80, including a double on the 17th after a plugged lie under the lip of the green side bunker.  What does that mean? Not much.  Many golfers strive to break 80. There have been dozens of books and training videos out there with the title “Breaking 80,” but it’s not interesting to me.

So what is interesting then about golf to me if breaking 80 isn’t?  Breaking say, 76?  75?  72?  Shooting in the 60’s?  The fact is I’m going to probably do those things this year, even several times.  While it’s nice to shoot a low number, I think feeling solid shots and being in control of what I’m doing is what makes golf interesting and fun for me. Or perhaps attempting difficult shots and having the ability to pull them off.  Sometimes those things don’t equate to low numbers.

So what am I doing?  At the end of last season I had burned out on golf. I’d become frustrated about how stagnant it had become, and how the game itself is infinitely more difficult the better one becomes.  Unlike other things that challenge me, like computer programming or building drones, golf is something that can’t be mastered.  I can write a program and eventually get it to do what it is supposed to do.  I can build a drone and make it fly.  On rare occasion, I can put together all facets, or perhaps 3/4 of the facets of my game.  Perhaps once or twice a year. Sometimes not even once in a year or two.  When that happens is a mystery.  One day it happens, the next day is a disaster. Unlike programming or building drones, which have incremental and tangible milestones, golf is fleeting.

I’m going to change some things for 2017. Shake it up. I went from thinking about quitting to buying a season pass to the Salt Lake City courses.  I can golf any day, anytime now, even holidays on that pass.  Also, I will not be renewing my membership in a club that I used to be president of for seven years, River Oaks.  Things have changed there management wise, and I’m no longer able to contribute my services to the league and course in exchange for golf privileges.  And probably most relevant, I burned out there.

A group I play with at my other home course is sort of dissolving.  That group soured a bit, though I still enjoy playing with them once in a while, like today.  I plan to try and hook up with a different group of golfers who are all very good.  Loose your wallet if you don’t play well good.  I also plan to use that city pass to spread my rounds across the seven courses, even the ones that are lower end.  I played one of them last year and it was short, quirky, and kind of ghetto for lack of a better word. It was actually fun.

Change of scenery I suppose is one of the primary focuses for 17.  Changing clubs, groups, courses… and maybe it will all add up to a change in attitude.

If not, then I just dumped a bunch of money into a pass which will be a waste.  I don’t like wasting things, especially money.

Yesterday (a Monday) I had a couple of hours to spend with my little guy, a 2.5 year old full of energy who loves putting with his plastic Little Tikes putter.  I usually go to my more upscale course, but this time I decided we would visit the “neighborhood” course.   This course is a lower end executive type course, a par-68 with short holes, a super modest pro shop, and a crowd more unique and authentic than I could have imagined.

The vibe of this place is super casual.  No collared shirts required.  Cargo shorts okay.  In fact, I don’t think they’d care if you didn’t even wear a shirt as long as you were there.

My boy and I were putting for a while.  A group of kids started converging for what obviously was a group junior golf lesson.   As it turned out I actually knew, and had had some previous lessons from one of the instructors.  It was great to watch these kids on the range and on the putting green learning the golf swing and the game.

The very working class parents sat in chairs under the shade of a big tree watching their kids hit balls.  There was a UPS guy, moms and dads of all types…  All this while a guy on a golf cart was playing guitar, harmonica, and singing.  More on the live entertainment later (really, keep reading).   What a cool scene.

My boy and I started to get quite hot and I remembered I left some bottled water in the car.  So we went back to the car for a drink.  While we were standing by the car I noticed a man carrying a woman in his arms from the driving range, while escorted by two other people.  The man set the lady down in the shade and they were very concerned about her.  I thought maybe it was a heart attack or heat stroke until I saw them icing and attending to the left side of her jaw.  She’d obviously been hit by a club.  What a bummer and that’s certainly a big point about golf injuries.  Most golf injuries are not from players being hit by golf balls.  Rather, the majority of golf injuries are the result of someone getting hit by a club during someone’s practice swing. 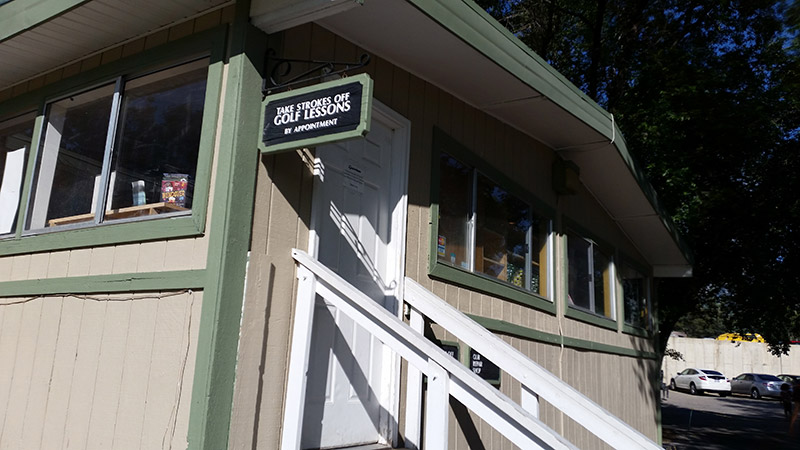 My boy and I went back to the practice green and hit a bunch more putts, then he took his plastic putter to the range stalls and started taking his first full swings.  He had been watching those kids and was mimicking them.  It was cool to see and he was knocking real golf balls a good 20 yards with a plastic putter.  While he was hitting I thought I’d say hello to the guitar player.

As a former professional musician who made a living for 25 years playing music, I’m always interested and want to say hello to other musicians.  I thought it was pretty cool a guitar player would bring his guitar and perform for the people at the course.  How cool to sit on a golf cart and play guitar!  He was very quiet and I could hardly make out what he was playing or singing from more than 5-10 feet away though.

Me: “Can you play Flight of the Bumble Bee?”

When I got close enough to talk to the guitarist and ask his permission to take a photo, I realized he was on oxygen.  That explained the quiet vocals.

I grabbed my boy and brought him over to listen to the music when I realized something odd.  He was capoed up about 5-6 frets, using no pick, and not really doing anything with his left hand other than muting some of the strings randomly.  It only took me a few seconds to realize that this guitarist was not playing any chords at all and was making up lyrics which he talk-sang as he chicken-plucked.

Bless this guy.  He didn’t know how to play guitar or sing, but it was still cool.  Nobody noticed because he was so quiet.

It will not soon forget my odd Monday evening at the “neighborhood” course.  It was authentic, tragic, entertaining, heartwarming, and breathtaking all at the same time.