Checking the Progress of the New Top Golf Utah

I do a lot of my grocery shopping at a specific store which has some great deals.  I haven’t been there for a while but stopped by yesterday for two heads of lettuce, some ranch dip, sour cream, coffee creamer, one cucumber, a green pepper, and two boxes of Uncle Ben’s rice.  (Just seeing if you are paying attention…)

Next to the store is a huge new net which I’ve seen for the first time.  It could only be one thing, the new Top Golf Utah. 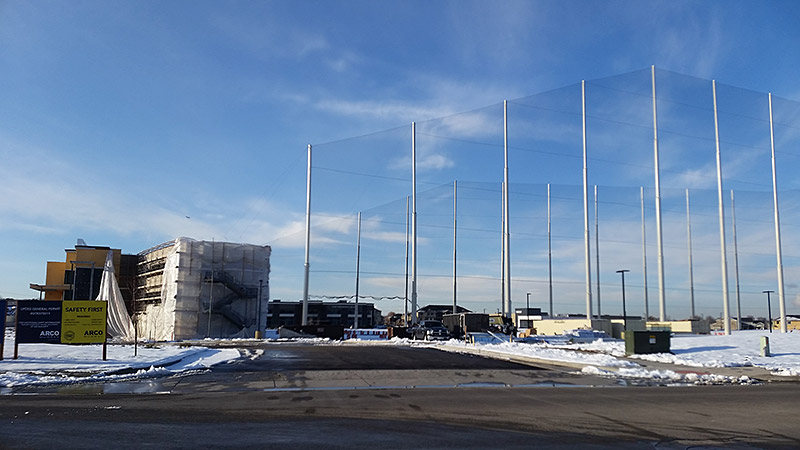 I drove into the parking lot and got my phone out to take a picture.  I had to drive to the end of the lot to get a wide shot, some 150-200 yards from the main building.  I know distances like that because, well, I’m a golfer.  At that point a macho construction worker came up to my car and asked “what are you doing?”  I said, “taking a picture.”  He then responded with class, “no you’re not.  You’re trespassing.  You can’t take a picture.”

So I drove a few feet to the street, got my phone out, and took a picture while not trespassing.  Thanks douche.  I’m only posting the photo for hundreds of thousands of visitors to see…

Anyway, looks like the Top Golf is coming along.  I’m still not sure how it will make money in the Utah environment however.

Hopefully when it opens they’ll let me in the parking lot and perhaps even shoot a picture with a cell phone camera.  I know, I know. It’s a lot to ask. 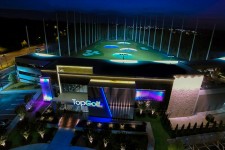 In the previous Hooked On Blog article the opening of a new Top Golf location in the Salt Lake City area was announced.  Top Golf is a very successful business model, a “Dave and Busters with a driving range” sort of gig.  The atmosphere is one of hot wings, hack golf swings, and flowing rivers of alcohol.

A great business model indeed, but will it fly in Utah?

Utah isn’t just another state. It is planet all its own.  As a lifelong non-Mormon resident of Utah I’ve got some insight and comments which Top Golf may have not considered in their Utah location’s business plan.  I’ll attempt to pen them in an entertaining top 10 list, without ruffling too many feathers with the local predominant religion.

Ah hell with it.  Never mind. Let’s poke some fun…

There you go Top Golf.  Hope these items above help you succeed because it is quite obvious the local government doesn’t want you to if you sell alcohol!

The golf industry is “struggling,” right?  Tell that to one of, if not THE fastest growing golf companies in the world, Top Golf.  Top Golf is a driving range on steroids, complete with all sorts of fun ways to hit balls and enjoy some food and frosty beverages. 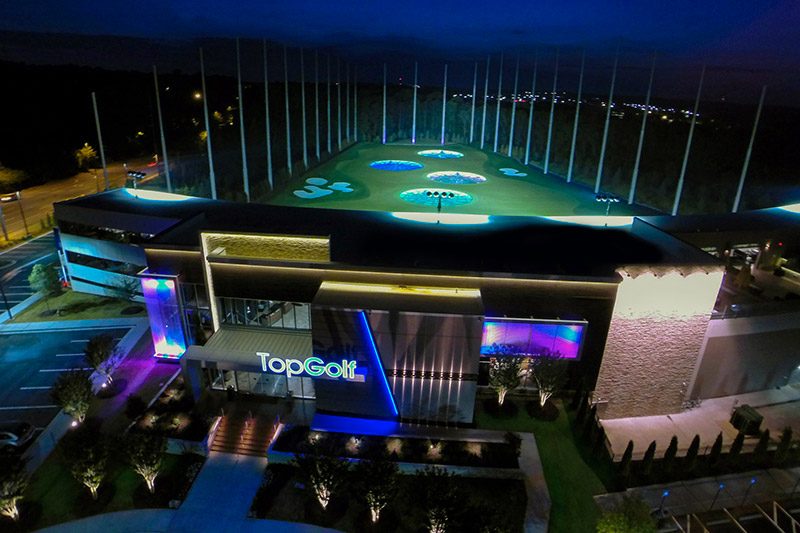 Top Golf has announced plans to open a massive location here in the Salt Lake area, in the city of Midvale.  I do my grocery shopping at a store right next to the location which is about five minutes from my house.  How convenient.

I find it very telling that a successful company sees fit to INVEST in the Salt Lake golf industry while the city of Salt Lake is desperately trying to close courses which are losing money.  Can you say mismanagement?  I would presume that Top Golf does some pretty detailed research before they decide to dump millions of investment dollars into a new facility, to make sure it will be successful. I’m happy to see that the Salt Lake area is worthy of such a venture.

I do understand that Top Golf isn’t exactly real golf. You can rent clubs and you’re in a sort of a “Dave and Busters” or “Buffalo Wild Wings” atmosphere. The good ways it is not like real golf is that anyone can participate, and it doesn’t take 4-5-6 hours to play.  I hear Top Golf can be as expensive or even more than a round of golf however.

It is sad that the city has screwed up its golf division so badly.  During the years when the golf courses were making profits the city diverted those funds to its coffers and funded other money-losing amenities like tennis courts and who knows what, rather than saving the money for improvements or a rainy day.  The courses and the supporting infrastructure now need improvements while at the same time that rainy day came.  Now there’s no money, so the city’s answer is to close the courses.

What will happen to the land if they do close any courses?  The land will be turned into a park or sold.  Yeah great.  A park generates NO revenue, unlike a golf course which generates cash flow through tee times, driving range, food and beverage, leagues, and equipment/apparel sales.  A park would not produce any tax revenue or generate any kind of economic flow.  And a park would not employee the number of people a golf course does.  Think about a golf course’s staff: pro shop, food and beverage staff, maintenance.  We’re talking hundreds of thousands of dollars per course in employee income (taxes, spending money, and so on) which will simply go away from the city/state economy.

Maybe the courses are in the red a little bit in this down economy, but the total dollars lost between taxes, wages, tee times, range balls, food/beverage, retail sales, will have a far greater impact on the local and state economy.  Unfortunately the city mayor and council can’t think past their initial bean counts it would seem.

Golfers are also mad that somehow the “bike loving” mayor managed to find some $8 million in city funds to pay for bike paths but can’t find a fraction of that to keep the courses running and fixed up.

Say, how many dollars does the city bring in from bike revenue?  I’m guessing about zero.

Thanks to Click2Houston.com for the bonehead of the week report of a Jaguar driver who found his way onto a Top Golf driving range in Houston.  He then, of course, became a target for the golfers.  Sounds fun.

A man in a white Jaguar gave a new meaning to the term driving range last Saturday.

Houston police said they went out to Top Golf along the Katy Freeway and State Highway 6 after a man reportedly started driving his car over the course.

Viewer Josh Putt sent Local 2 pictures of the car. Putt said patrons apparently made the Jaguar a target, and began pelting it with golf balls.

Workers were eventually able to corral the car into a corner with a ball-collecting cart.

A security guard detained the driver and called police, but no one was arrested.

I wonder if the driver politely asked to play through?