The days of proofreading, editors, grammar, and common sense in the golf media world are long gone… 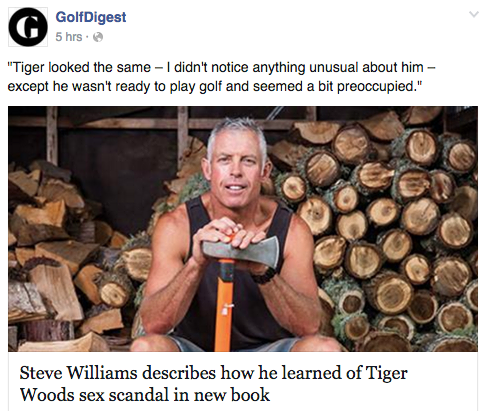 So Steve Williams learned of Tiger Woods se scandal in a new book?  It’s amazing it took him until 2015 to learn about the 2008 scandal, being so close to Tiger and all.  Nice job Digest.

On a side note, I’m not interested in Steve Williams or anything he has to say.

Greetings from my local auto garage, where the official HOG World Tour vehicle is undergoing some maintenance and a safety inspection.  Unfortunately I’m going to need a new windshield…

Quite an entertaining weekend of golf and soap opera drama this week.  First let’s talk about the golf.

Adam Scott put on quite an impressive display of GOLF this past weekend.  GOLF!  He was in total control of all parts of his game en route to an impressive WGC victory.  Kudos to Adam for playing so well amidst the the circus which is Tiger Woods and Steve Williams.  I really look forward, and hope that the novelty of the Woods/Williams drama wears off and it gets less and less air time.  But knowing the media and their seemingly never ending hunger for anything related to Tiger Woods, I’m not sure that will happen.  Even more Kudos for the way Adam Scott has handled himself in staying out of the drama.

Tiger Woods made his return to tournament golf for the first time since leaving THE PLAYERS back in May after nine holes.  As I mentioned in my previous Tiger Woods commentary, regardless of the outcome of the WGC Bridgestone event Tiger’s comeback should not be based on one round or one tournament.  Though he said he was in the WGC Bridgestone to win the thing, I didn’t quite expect that.  What else is he going to say anyway?

What plagued Tiger before this comeback?  Driving accuracy was a big issue.  So how did he do in that department this past week?  His four rounds’ stats for the week in fairway percentage were 36%, 57%, 29% and 36% for a 39.3% average.  I hit more fairways than that, which isn’t saying much.

Tiger’s putting was decent for the most part, except round two where he had 33 putts.  T43 in putts per round and T26 for putts per greens in regulation at 1.745.

Tiger’s greens in regulation for the tournament was 65.3%, tied for 26th.

A blaring issue is in the mistake department–the making of bogeys and doubles.  TW had 11 bogeys and two doubles.  We used to see periods where Tiger would go very long stretches without bogeys and rounds upon rounds without doubles.  Even if Tiger cut his bogeys in half and eliminated the doubles, he still would have lost to Adam Scott by 7-8 shots.

Many press and bloggers are worked up about Steve Williams’s post round comments yesterday after Adam Scott’s win and for good reason.  His comments seemed to be more of an FU to TW.  And to me it is a bit sad and odd that after a win, a player’s caddie gets more press time than the player himself.

Williams comments like “that’s the best win I’ve ever had,” and “best week of my life” even had Jim Nantz puzzled.  Me too.  How one could put this WGC event above say a 15 shot win in the 2000 U.S. Open at Pebble, the 2008 U.S. Open at Torrey Pines with the classic playoff battle between TW and Rocco Mediate, the playoff in the PGA Championship with Bob May etc., is beyond my comprehension.

One final thought on Steve & Tiger for now

I’ve had my share of the Woods/Williams drama for now but I’m sure it is far from over.  For now it is obvious that Williams has the lead following winning with Scott last week.  Hell, as a caddie his 10% of Scott’s winning share is over 3x what Tiger’s winnings were.  Stevie is ahead of Tiger on the money list.

And now it is time to focus on the coming week.  It is PGA Championship time baby!

I’ve seen some funny things and this is definitely one of them. While watching Tiger Woods win the 2009 Buick Open, someone let out a big fart in the 18th fairway. It sounds like the mic was pretty close to them too. Tiger and caddy Steve Williams couldn’t help but laugh. Ironically right before the fart Nick Faldo says “he needs to try and release a little bit more.”

Sorry but the video is no longer available…

The greatest improvment in Tiger Woods’ game this year? My diagnosis of Tiger’s game may be surprising.

Below I break down the state of Tiger’s game coming into the US OPEN, and highlight what is truly the most improved component of Tiger Woods’ game this year.  I highlight the part of Tiger’s game which has been missing for years and is now in place.

It may not be what you think.

Q: What is the greatest improvement in Tiger Woods game this season?

Is it Tiger’s putting, scrambling, scoring?

This year Tiger Woods is 17th in putting, with 28.25 putts per round. Tiger is 5th in scrambling, 1st in scoring average.  All interesting stats I suppose.  None are the most improved components of Tiger’s 2009 game.

Is it Tiger’s driving?

Tiger switched drivers two weeks ago and hit a blistering 14/14 fairways in the final round of the Memorial en route to his 2nd victory this year.  His fairway percentage for all four days was 87.5%, the best of his career.  Hitting fairways in this week’s US OPEN is crucial and this bodes well for Tiger.  But is his driving the biggest improvement in Tiger’s 2009 game?  Nope.

Tiger’s knee finally looks good.  Earlier this year when Tiger struggled a bit, he said “the knee is fine” when asked by the brilliant golf media.  At the Memorial two weeks ago the knee really did look great.  Tiger contradicted his early season statements by saying that he has been able to get more practice repetitions in lately since the knee is now better.

So is his biggest improvement for 2009 the knee or his ability to swing without worry?  Is it that his lower body and general technique with his legs and hips looks better than it ever has?  Naaaa.

If it isn’t all those, what is it?

After Tiger’s amazing chip-in on the 16th at The Masters in 2005 I cringed when I watched the completely uncomfortable and terrible “high five” between Tiger and his caddy Steve Williams.  It was a complete miss.   Myself, Golf Grouch and many other web sites commented on this.

What I saw at The Memorial

At The Memorial I saw something different.  I saw Tiger and Steve actually land a perfect high five.  I rolled my DVR back in disbelief but sure enough, they really hit one.  I swear that was the first one ever between these guys.

A few holes later Tiger hit a great shot and they executed another high five.  Bingo.  They landed it again.  This was now not a possible case of random luck or a “blind squirrel finding a nut.”  It wasn’t a case of a “broken military clock being right once a day.”  They just nailed two in a row.  Perfect.  Flawless.

At that point I started to figure out that Tiger Woods didn’t just rehabilitate his knee in his down time over the last year.  Yes, he and Stevie have been working, practicing, drilling, perfecting their high fives and they’re peaking at just the right time for the US OPEN.

I’d witnessed two in a row, but after years of terrible misses I figured they’d miss the next time.  On the edge of my chair I watched as Tiger hit the incredible approach to the green on the 18th, Sunday at The Memorial.  He stuck it to about 14 inches, sealing a birdie and an amazing victory.  Tiger turned to Steve and landed yet another perfect high five.

I freeze framed the last set of high fives and made still images of them below:

Three in a row isn’t luck my friends.  The weakest part of Tiger’s game for years hasn’t been his wild driving and missing fairways.  It has clearly been his high fives with Steve Williams.  I’m proclaiming now that the final piece of the perfect golfer’s game is in place.  Tiger’s game is now complete.

Tiger “a few weeks away” according to Steve Williams

The Golf Blog has a post citing quotes from Tiger Woods’ caddy Steve Williams. According to this post Tiger is still a few weeks away from returning to the PGA Tour.