Welcome to the first Hooked on Golf Blog golf product review of 2019! It’s the dead of winter here in northern Utah, and with that comes no golf. The local courses are in a five month frost delay. I am getting in a lot of skiing though. Thanks to my new Puttout Putting Mat I’m keeping my putting dialed in during these winter months. Check it out. 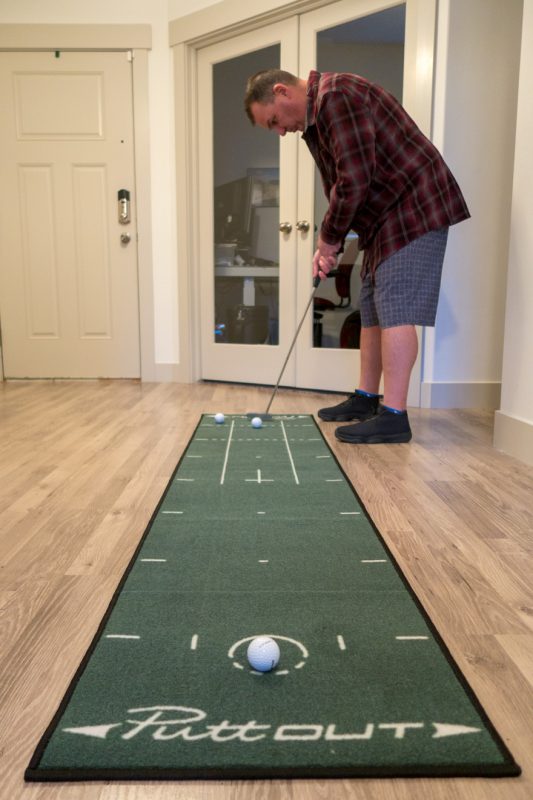 The Puttout mat accommodates putts of up to six feet in distance.

There are markings on the mat at one-foot increments, helping the golfer dial in distance control from putting’s most crucial distance, inside five feet. 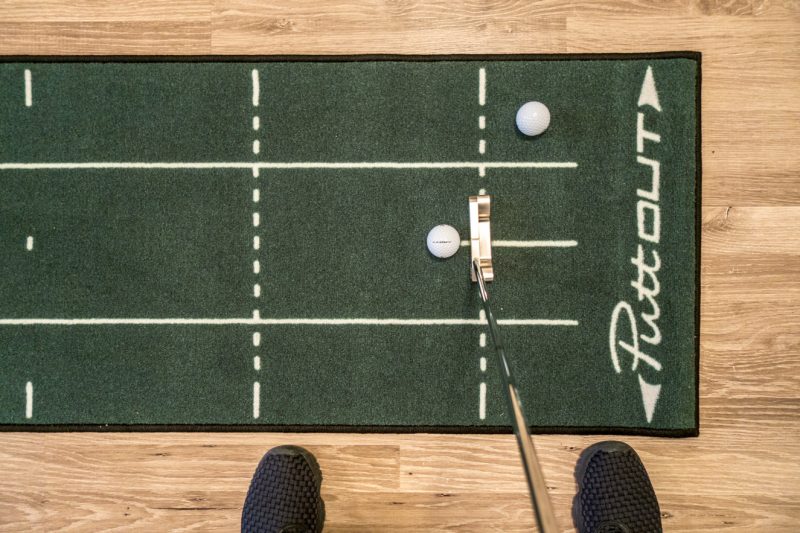 The fabric of the mat is very nice and rolls true. The speed feels “right” in terms of green speed. Puttout reports that the speed is a 10. I have a stimpmeter somewhere around here but I haven’t measured the exact speed to confirm.

The mat rolls true after putting it away and getting it out many times. This is due to the thick rubber backing which keeps it from creasing.

The mat rolls up easily and stores in a nice carrying bag (below).  The case is supported by a dense cardboard cylinder which helps keep the mat’s shape and smoothness. 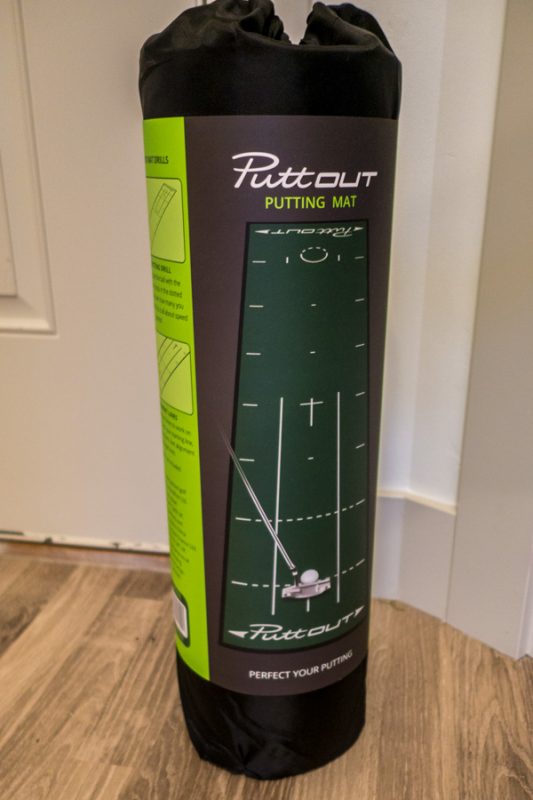 The mat is available in two color schemes, gray and green.

Line and speed are the two crucial factors in making putts. It doesn’t matter what grip you have, what putter you use, or what your apparel scripting is. If you can’t get the putt rolling on the proper line and speed you’re destined to bad putting. 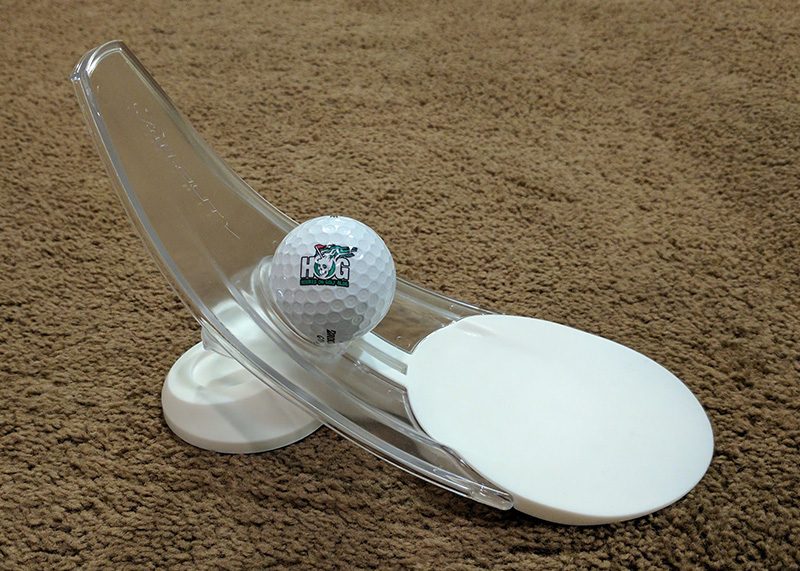 The PuttOut “Pressure Putt Trainer” is designed to train the golfer get get the putt rolling on the correct line and speed. The unique curved design returns good putts the distance they would have traveled past the hole. The side contours reject offline putts and force the golfer to a bit of a “walk of shame” to get the balls, as those shots are not returned.

An interesting feature of the PuttOut is the little retractable “micro target.” In the photo above you can see the HOG golf ball is sitting in it. Putts on the exact line and speed will stop inside the target. Once the golfer gets used to strokes at such a tight precision and speed, putting into the much larger and easier to hit golf hole seems much easier. The micro target back plate is hinged so the golfer can flatten it out and turn the device into strictly a returning device.

The unit folds into a compact and easy to carry shape. The unit would fit easily in a golf bag or even luggage when traveling.

I keep mine in the hallway between the kitchen, my office, and the bathroom. It’s quite a trafficked spot. It’s fun to grab my putter and stroke a few to clear my my mind and improve my stroke, a few times per day.

During the last couple of practice sessions on the putting green I tried the technique Jordan Spieth sometimes uses on shorter putts.  He will actually look at the hole and execute his putting stroke.  He’s not looking at his golf ball or having his head/eyes down in the stroke.  Conceptually it is not that odd.  Think about foul-shooting in basketball.  The shooter is looking at the basket, not the ball.  Well maybe anyone but Shaquille O’Neal.  No idea what he was ever looking at.

It was weird trying this technique.  I made the first one.  It felt strange and was very odd to see the hole, then have the ball appear in my field of vision, let alone being on the proper line and then going into the hole.

I’d say using this technique I was making a large percentage of the putts in short range.  I was surprised to make as many as I did without even looking at the ball.  I suppose that means my stroke is fairly pure and consistent, even when I’m not looking at the ball.

Will I put this in play?  Nope.  I make a lot of putts and I’m very confident in my putting.  No need to mess with something that isn’t broken.

Someone should have told that to Tiger Woods. 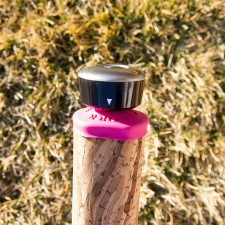 When most amateurs practice golf, they go straight to the driving range and hit driver after driver. On a typical course one hits driver 14 times but could hit a putter 36 or more times. The quickest way to shave strokes off of one’s scores and lower the handicap is to improve putting.

In the day of apps and mobile technology there are some very cool systems on the market which can analyze golf swings and putting strokes, giving the user a wealth of very valuable information which can be used to improve one’s game and ultimately one’s enjoyment. The 3Bays GSA Putt system is one of these systems, focused entirely on the area most amateurs can improve the fastest, putting.

3Bays GSA Putt is a small device which attaches to the end of the putter grip. Inside is an accelerometer which captures movement data and transmits it to a smartphone or tablet via a Bluetooth connection. In the mobile device is a very cool application which takes that putting stroke data and processes it, showing the player all sorts of great statistics. The data can be stored and compared for consistency, and even played back in real time or slow motion to give the golfer the opportunity to see what his/her putting plane or line really is.

The following statistics are tracked by the GSA Putt:

Along with the features above, the software allows the user to save swing sessions and view later. “Best swings” can be marked and are used to compare other swings for consistency.  In the image below you can see my “best swing” in blue and the current swing in white.  Fairly consistent.

Below is a video showing that latest stroke as shown by the application:

Setting up the unit to work with a smartphone is fairly easy.  You put the unit on the end of your putter, download the application from the Google Play Store (Android systems) or the iTunes Store (iOS systems).  Then follow some simple instructions to connect or pair-up the GSA Putt with your device.

This unit can be used even at home or the office when practicing putting on the carptet. No need to go to the golf course to work on your putting. The benefits of seeing one’s swing path and all of the individual statistics are fantastic. Many putters try to putt “stright back and straight through” but I do not. I use more of a Ben Crenshaw “swinging gate” stroke where the putter goes back inside the line, closes at impact, and then on the follow through goes back inside the line. You can see that swinging gate in the images and video. The problem with a stroke like that is making sure the putter face is square at impact, and you can see that I can be 1-2 degrees open at impact. That’s a push. By practicing and looking at my stroke data in the GSA Putt application, I can make sure my putts are all starting out on the proper target line.

In my opinion the most important stats tracked are the face angle and the tempo. My tempo looks good. I bring back the putter slow and accelerate through the stroke, thus the longer backswing time of .88 and shorter downswing time of .35. If those numbers were the opposite that would be very bad, as the backswing would be a quick jerk and then the putter would decelerate through the impact area, which is very bad.

Don’t buy a new putter to fix your putting issues or improve your putting. For the same cost of a nice new putter (under $200) you could pick up a 3Bays GSA Putt putting analyzer.

Yesterday I had a chance to chat with golf great Dave Stockton for a while.  Stockton racked up 10 PGA Tour wins, including TWO PGA Championships and two 2nd place finishes at the Masters.  I’d met Dave in 1997 when the then “Senior Tour” was in town.  I followed him around, watched him shoot a 63 on a tough Jack Nicklaus course and win the tournament.  Aside from Ben Crenshaw, Dave Stockton is known as one of the best putters of all time.  My putting stroke is a close model to Dave’s, and most of my opponents would prefer I do something else.

Me:  Hey Dave how are you?  We met up in Park City when the Senior Tour played up there years ago.

Stockton: Yes.  I wish we still played up there.  I really enjoyed it.  I used to love to play up there and then go fishing up in that area.

Me:  I wish you still played up there too.  We don’t get much high level professional golf here in Utah.  I hear you are injured.

Stockton: Yes.  I tore my rotator cuff.  I had rotator cuff surgery a couple of weeks ago.

Me: Ouch.  That must have hurt.  How long will you be out for?

Stockton: I’m surprised to say I’m not feeling any pain right now.  I should be back in about five weeks.

Me: I want to tell you how much I enjoy your putting style.  I’ve modeled a lot of my putting after you.

Stockton:  Thanks! More and more people are modeling their style after mine these days.

Me: So you’re here at this golf tournament (Champions Challenge at Thanksgiving Point, Utah) but you obviously aren’t playing.  Why are you here?

Stockton: I’m following my sons around.  They’re playing in the tournament.

Stockton: Thanks.  Nice talking to you.

Speaking of Dave Stockton’s putting, he has a book called “Putt To Win.”  Click here or on the image in this piece to pick up a copy.