All Smiles For Lefty 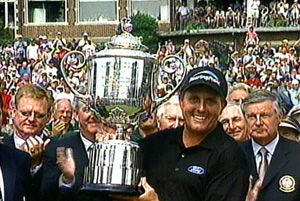 Lefty notched his 2nd major championship and his 4th victory of the season today. This elevates him to another level in my opinion, like him or not. There are plenty of players out there with one major, but winning two is whole new ball game.

Some thoughts:
In the last two years Tiger has two majors, Phil has two majors.
Phil is now half way to a career slam.
The “Big 4” turned into the “Big 5,” but now it should be called the “Big 3.”

4 responses to “All Smiles For Lefty”