I saw my shoulder surgeon for the final time yesterday; final check following my surgery for torn rotator cuff, torn labrum, torn bicep tendon, and bone spurs.  It is now exactly 18 weeks since my surgery.  I’ve spent many weeks on the physical therapy table below, looking at a great photo of Arnold Palmer. He looks so calm and his grip is very solid. His glove hand is perfectly perpendicular to the shaft, which is interesting.

I’ve made some progress in the last 2-3 weeks, following a cortisone shot.  In physical therapy my range of motion is increasing quicker now than it was.  That’s probably thanks to the shot and simply time to heal. The doc said I can cut down my physical therapy sessions from twice a week to once a week, and he suggested that I only need to go about 4-6 more times.  He said I have good strength in my arm.

Though I’m only prescribed another 4-6 weeks of PT, that doesn’t mean I’ll be “done” by then.  Not even close.  Because of my frozen shoulder condition, the doc said it would probably be another year and a half before I have full motion in my right arm.  He doesn’t see me playing golf at all in 2019.

What am I to do now? I’ve been playing multiple rounds of golf per week for decades (when there’s no snow).  I’ve built up a popular, one-man golf blog based on mostly on-course testing and evaluation of golf gear.  I could cover golf apparel, travel, and maybe a few accessories here and there without actually playing I suppose. I can’t swing a damn club so there go any club reviews, grip reviews, ball reviews and so on.  Where’s the motivation going to come from?

Prior to the 2018 season I had struggled with my game the previous two years.  I fantasized about quitting.  When 2018 hit I made some gear changes which re-sparked my game and enjoyment a bit so I stuck with it.  But now it is looking like I won’t play until perhaps late 2020, and I’ve already gone seven months without playing. I’ll be starting over completely.  Golf is hard enough as it is, to have to start over.  And how much power will I have when I come back?

I don’t have the answers to any of these questions/issues at this point.  I’m just taking it one tight-shoulder day at a time. 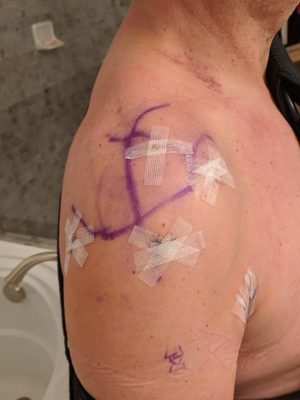 It has now been 15 weeks since I had surgery for a torn rotator cuff, torn labrum, torn bicep tendon, and bone spurs in the right shoulder.  It has been a frustrating several weeks as I have developed what is known as “frozen shoulder.”  This condition is where there is too much scar tissue and inflammation in the shoulder socket, causing it to literally lock up.  I had not been able to move it beyond a certain amount for close to two months.  I got a steroid injection about three weeks ago, and finally over the last week and a half I’m seeing some notable progress.

At rehab last week the therapist got my arm lifted (front) to about 160 degrees, a new record over 150 degrees.  It had been at 150 for weeks.  Last week she was able to get the arm to about 160 degrees in a more side motion, away from the body.  That was a record as well.  Today, with the therapist’s help, I got the first measurement to 170 degrees and the 2nd to 180.  Major improvements.

I’ve also noticed that my pain level over the last week or so has subsided quite a bit.  I’m going large portions of the day with no pain.  I’m also sleeping in my own bed, and even sleeping on my left side with no pain or waking up due to pain in the night.  Major win.  I can lay on my bad shoulder side for awhile, but moving after that is painful and stiff.

I can finally see some decent progress, 20 degrees or so, in the last couple of weeks.  Major breakthrough.  I’m getting more exercises and stretches which I’m religiously doing at home daily.

I still have a long way to go.  I can’t reach behind my back with my right arm, at all.  Not even an inch or two.  I can’t get anywhere near a throwing position, nor can I even reach across my body, say to dry my left shoulder off with a towel.  It takes effort to shave right handed, or wash my hair right handed, but I can do it now.

Fortunately I’ve been able to keep my sanity, somewhat.  I’ve taken up backcountry skiing and I’ve gone up into the wonderful mountains here in northern Utah for “skin” sessions.  A few days ago I skinned up to over 10,000 feet.  Great exercise, and a physical activity I can do, even with a limited right arm.

Today I grabbed a golf club out of curiosity.  I could take it back gingerly to about 1/3 of a full swing before I felt pain. Worse than that was the followthrough. Once my right hand crossed about the center of my body it was big time no-go zone.  So I bet the farthest I could hit a golf ball at this point, with any club, would be maybe 20-30 yards. And I’d have one swing in me before I’d have to bail.

I’m now past the 12 week mark following shoulder surgery to repair a torn rotator cuff, torn labrum, torn bicep tendon, and to remove bone spurs in the shoulder capsule. I’ve been suffering pain with extreme stiffness and inflammation for months now. Sleeping has been difficult. My body has over-reacted to the surgery and “healed too well,” as my physical therapist says. There is a large buildup of scar tissue which is causing pain and reducing my mobility and flexibility. This condition is known as “frozen shoulder.”

I saw the shoulder surgeon last week for my 12 week check, and we decided the best course of action for the above issues was to do a steroid shot into the shoulder capsule. This is to reduce inflammation, swelling, and stiffness, and help me progress faster in rehabilitation.

The shot hurt. It was kind of a deep, dense pain. That pain was even worse over the next 2-3 days. Fortunately that pain has gone away mostly, but I still have quite a bit of discomfort. Pain will flare up if I move the wrong way or push things too hard.

Today (12.5 weeks), I did my first rehab exercises following the shot. The doc recommended taking a break from them for a few days. I feel like I’m in the same position mobility-wise and pain wise, that I was in five weeks ago. I’m hoping the shot will do its thing and I’ll start to more quickly recover and progress.

I’m nowhere near being able to swing a golf club, which is expected but still frustrating. I’m not even at a point that I could take a club out of the golf bag with the right arm.

Not much else to say except it sucks. 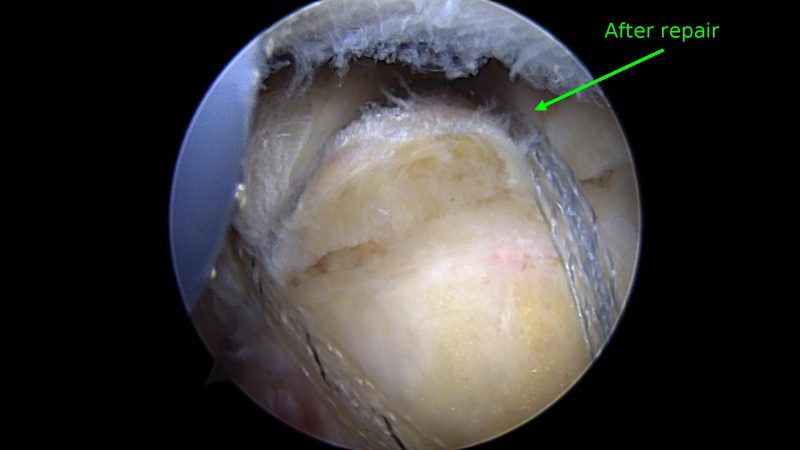