I just passed the 1.5 year mark following my surgery for a torn rotator cuff, torn labrum, torn bicep, and bone spur removal in my right shoulder.  Yeah I went big. Since my shoulder surgery on February 14, 2019 (yes, Valentine’s Day) I’ve done months and months of rehab and work to get the shoulder back to functioning properly.  During the rehab period I developed “frozen shoulder,” a situation where scar tissue and inflammation builds up around the surgery.  That condition causes lots of pain, soreness, stiffness and slows down the recovery.  I had special treatments in rehab as well as a cortisone shot to reduce the frozen shoulder, but none of that worked.

I’m happy to say that I’ve been soreness and pain free in the shoulder for about a month now, and I attribute most of that to….. any wild guesses?  Mountain biking. I’ve taken up mountain biking this spring and summer with a new, very expensive, Specialized bike.  I’ve done a ton of riding and there is a lot of work that goes into it in terms of upper body.  There is lots of pulling, pushing, stabilizing and so forth.  The shoulder did not like that for the first few weeks, but I believe that all that movement eventually broke up the scar tissue.  Now I’m at about 95% range of motion with no stiffness or soreness.

After several weeks of being pain free, I decided it was finally time to try and hit a golf ball.  I had been getting a few clubs out each week for a few weeks and making some light swings in the backyard to eval the shoulder and see if it was realistic to try playing.  I finally pulled the trigger and hit a small bucket about five days ago. I was a little paranoid about overdoing it, so I didn’t swing super hard.  I started off with some light drivers, not wedges.  Driver is my warm up club and I figured hitting a club that doesn’t contact the ground might be a better introduction to ball contact for the shoulder.  I then hit a few pitching wedges, 8-irons and even a couple of 5-irons.  Then back to some 56 degree wedges.  At that point I was about 3/4 through the small bucket and the back started to tighten up and I got a little tired.  It was also about one billion degrees on the range.  Summer here is super hot and dry.  So I called it a day.

I was quite surprised at the lack of “bad” shots in the range session.  There were two or three nasty shots that appeared about 20 balls in, but mostly the shots were high and accurate.  They were not long though.  I measured my “good” drives with a laser and they were around 245 yards.  Not as long as I was two years ago.  The irons didn’t seem to lose much distance though.

I waited a few days to see if there was any soreness in the shoulder or any repercussions from the session.  I did have some small sore spots in the shoulder, but that may have also been attributable to crashing and rolling down a small hill on the mountain bike. It’s all back now and I plan to try hitting a few more balls this weekend.  If that goes well enough, I might try to play nine holes.

Swung a Golf Club For The First Time Since November 2018

I got a couple of clubs out of the garage today and swung away at the front lawn. Connected with a few dandelions. The backswing is fine. The finish apparently won’t be there. No club head speed. I took about 15-20 swings. Now the shoulder is very sore and angry. It’s going to take a long time to get back.

I tried a few swings with my New Level irons and a few with my Cobra King F8 driver. I was really starting to dial those in back in late 2018.

I remember I had just found the “holy grail” setting on the adjustable driver. I’m sure that’s all changed now.

And who knows about the shafts now.  If my swing speed is slower all my shafts might be wrong.

Greetings from the Albion Grill at Alta Ski Area.  I’m golf blogging today from a ski resort, waiting for the lifts to open. Had an hour to kill so thought it would be a good time to do a shoulder update.

Yesterday, Valentine’s Day, was the one year anniversary of my surgery for torn rotator cuff, torn bicep tendon, torn labrum and bone spurs in my right shoulder.  My recovery has gone slower than I’d hoped, and it has now been about one month that I’ve not had nagging pain or soreness.  I was in pain for a solid year and a half including pre-surgery.  During my rehab I developed “frozen shoulder” which was a total pain in the ass.  Scar tissue and inflammation built up, restricting my range of motion and increasing the pain. It took about six months to shake that.

It has now been a year and three months since I last played golf.  My last round was at TPC Danzante Bay, and I have the fond memory of making birdie on the stunning par-3 17th hole. Picture below for fun. 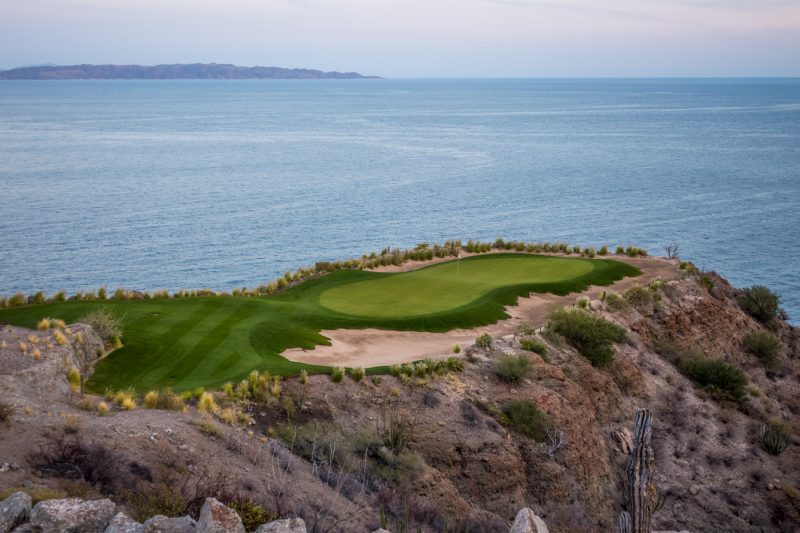 My shoulder is about 85% I would say at this point. I don’t get sore when I do regular activities, or even do heavy skiing.  I can now do some shoulder exercises in the gym and it doesn’t get mad at me.  I’m not pushing it though.  I’ve tested out a golf swing without a club, just to see how the shoulder reacts.  The backswing is probably 90% but the followthrough is probably only 75%.  That’s the killer.  I don’t think I’ll really be able to generate much swing speed yet because of lack of flexibility and fear of pain at the end of the swing.  No high finishes for me.  I may have to develop a 100% punch shot game if I’m going to play any serious golf. I’m sure the shoulder still has more healing to go as some say the frozen shoulder can take years to completely go away.

For now I’m in ski mode here in northern Utah.  Spring is around the corner and it is going to be interesting to see not only how my shoulder situation unfolds, but how my mental situation unfolds as well.  I haven’t missed playing like I thought I would.  I’ve used my time to pursue other interests, like building and flying drones, skiing, hiking and so forth.  I wonder how I had the time, the money, and the patience to golf in the first place.  Perhaps that part of my psyche will come around when the snow melts and I see green grass and hear some birds chirping.

What I miss the most about not playing golf isn’t the game itself or the golf courses or anything like that. I miss competing. I miss my buddies…. I miss taking money from my buddies.  That’s probably what I miss most… LOL.

As of tomorrow, I’ll be 10 months removed from shoulder surgery for a torn bicep tendon, torn rotator cuff, torn labrum and bone spur removal.  I was in a sling for about six weeks following the surgery, and did rehab for about six months. During the course of my recovery I developed “frozen shoulder,” a condition where scar tissue and inflammation builds up causing extreme soreness and stiffness.  That condition can take up to several years to subside. 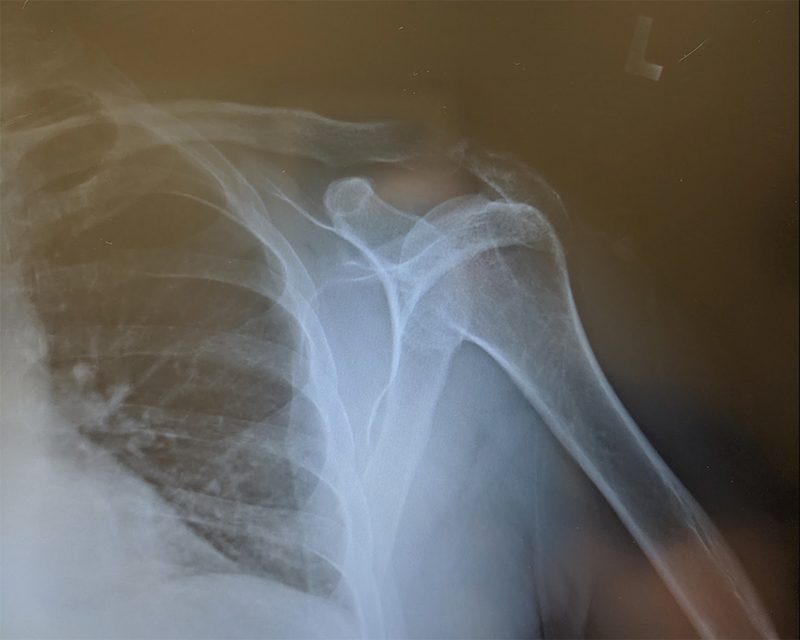 The majority of the injury happened in the summer of 2018, but there seemed to be damage occurring in the previous year or two before that. I’d experienced shoulder pain dating back to early 2018 and through until November 2019. Having been in pain for so long, I’m happy to report that as of about 2-3 weeks ago I haven’t been noticing any. It can still be stiff if I push it working out or doing activities which stretch the limits of my arm’s mobility.

It has now been 13 months since I played golf. If I try the motions of a golf swing I can tell that I don’t have much in terms of release. Release meaning the extension of the golf swing following impact.  Once my arms get about 1/3 of the way to the finish I can feel that frozen shoulder tightness. That’s not great, but a few months ago I could not have gotten to that position.

I also had a little boo boo this summer while hiking.  I fell and dislocated my other shoulder.  That one has a torn labrum and an indented ball, the ball part of the ball and socket.  That means it will likely dislocate easier.  I could have chosen surgery to fix the damage, but I’ve opted to try and build up strength first and see how that goes.

Winter is here in northern Utah, so I wouldn’t be playing any golf this time of year anyway unless I traveled south.  So not a huge loss in terms of golf at this point.  I’m hoping that after the 5-6 month winter my flexibility will have improved enough to start trying to make some golf swings.  I doubt I could hit a ball farther than 40-50 yards at this point.

That’s all fine. I’m in full on SKI mode now.  Bring on the powder.  I’m working on a new site for skiing (and other mountain sports). It’s under construction, but the site “Hike.Ski” is somewhat up and running.  It’s an interesting domain.  Not a “dot com.”  Just type in Hike.Ski into the browser URL.  The full site is https://hike.ski.

I’ll report again when there are new developments on the shoulder. Thanks for your patronage.

I’m now at the 17 day mark since I dislocated my left shoulder.  I saw the shoulder doc last week with some minor pain and we decided to wait and see how that unfolded.  Unfortunately a week later I’m in some pretty notable pain.  The pain is waking me up at night, and it is severe enough that I can’t steer my car with the left arm, or do other basic things left-handed.

The wait and see period resulted in my having to schedule an MRI, which I got today. 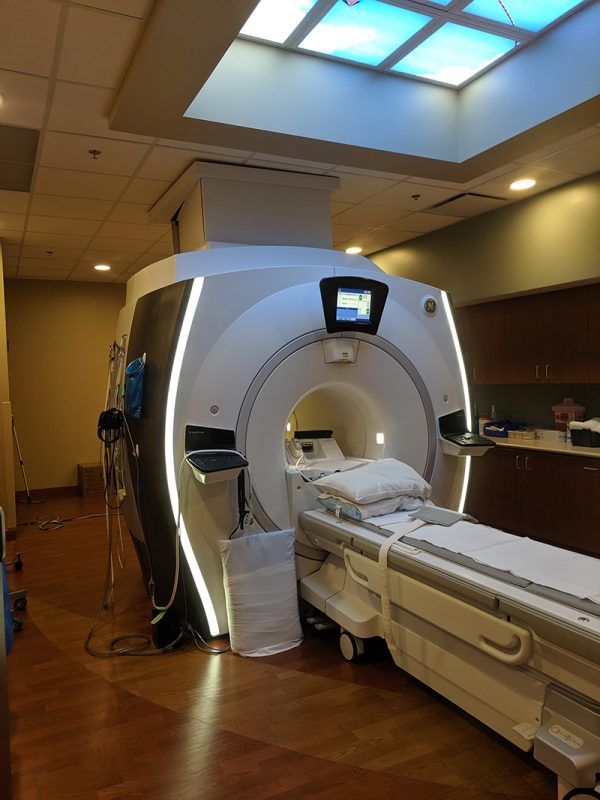 If you’ve never had an MRI, it is quite an experience.  You can’t move, at all.  You are put inside this tube that I’m sure would freak out claustrophobic people. Once inside the tube, it makes all sorts of loud, crazy, godawful noises. My scan took about 30 minutes.

I’ve Been Through This Before

As regular HOG readers are likely aware, I had shoulder surgery on the right shoulder back in February for a torn rotator cuff, torn bicep tendon, and torn labrum.  I’m still recovering and it is looking like it will be sometime in 2020.  So I know what the pain of those injuries “feels like.”

That said, I’m sorry to conclude that I’ve probably got a torn rotator cuff and torn bicep in the left arm.  That’s not confirmed yet.  I’ll see the doc soon.  If my injuries do require surgery I’m going for it as soon as possible.  The sooner I get it taken care of the sooner I can return to normal activity.