Titleist seeding new prototype 712 irons this week at the Mink

Gear head alert. Titleist has released some photos of their prototype irons for 2012, the 712 series. They are “seeding” them to players for a “tour validation analysis” this week at the AT&T National at Aronomink Golf Club. I’ve snagged a few shots of some of these fine looking clubs and thrown them in the Hooked On Golf Blog Titleist image gallery. Click the image here to see the rest of them, including the new Titleist 712 CB, MB, AP1 and AP2 irons. 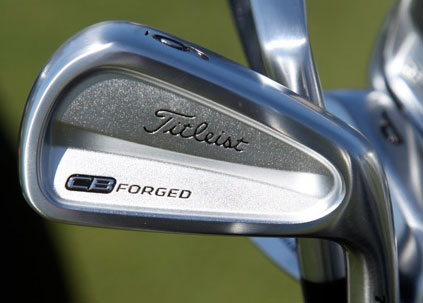 Inside the Titleist tour truck

I managed to sneak into (okay “force” my way into) the Titleist Tour rig here at the HP Byron Nelson Championship. Inside the truck were busy club technicians tweaking and building clubs for the Titleist players in the field. I mean BUSY. I watched as my new pals built and tweaked Scotty Cameron putters, Vokey Wedges and 910 drivers.

I gained a lot of cool bits of info on how each player likes his club setup, specific wraps under the grips, the lie and lofts they like etc.  It was quite an experience and I thank the folks at Titleist for letting me get in the way watch them work for a while.

“The Fila Korea and Mirae group understands and appreciates our golf industry leadership, passionate associates, and unique and enduring culture. Together, with our new owners, our team is looking forward to strengthening and building upon the global success of the Titleist and FootJoy brands.” ~Acushnet CEO Wally Uihlein

No major changes to Acushnet’s management team are expect currently and its worldwide headquarters in Fairhaven, Massachusetts should remain just that.

“The acquisition of Acushnet transforms our platform with a stable of premier world class brands.  We are equally excited to embrace Acushnet’s exceptional management team led by Wally Uihlein. With our extensive knowledge and reach in Asia, we believe that the Acushnet brands have incredible new opportunities for growth in the emerging markets in Asia.” ~Gene Yoon, Chairman and Chief Executive Officer, Fila Korea, Ltd.

Back on December 8th I started up a petition to have HOG users chip in and buy Acushnet.  Apparently the $19.60 we scraped up wasn’t quite enough.  Maybe next time.

The Callaway vs Acushnet (parent company of Titleist) patent case has been going on now for about five years.  It has been like a boxing match with each heavyweight fighter seemingly getting knocked out, only to gain consciousness at the last second and deliver a near-knockout blow of their own.

Callaway scored a big victory in 2007, forcing Acushnet to stop selling the current revision of the ProV1, though that took nearly two years to happen.  Acushnet was forced to change the golf balls at that time.  I remember those few months when my buddies were stocking up on ProV1’s, just in case the new versions weren’t as good.  Acushnet later won an appeal on that ruling, and the court game was back on.

This past time around, Acushnet won as the judge upheld a jury verdict from March 2010, determining that the four patents in dispute were invalid.  Callaway was denied a request for a new trial.  Callaway has the option to appeal, but apparently will start a new suit for alleged infringement of other patents.

END_OF_DOCUMENT_TOKEN_TO_BE_REPLACED

I just found a straggler video I hadn’t even uploaded to YouTube yet! This is an interview I did from the 2011 PGA Show with my buddy Brett. We cover the new Titleist 910 driver and its adjustments, as well as the 910 series metal woods.