I get a ton of golf accessories in for review here at Hooked on Golf Blog. From apps to laser rangefinders to GPS’s, golf club stands, to cigar holders, I see it all.  One accessory that stood out to me for 2018, and which wins the Product of the Year Award for Golf Accessories, is the ShotScope V2 GPS Watch with Automated Performance Tracking. 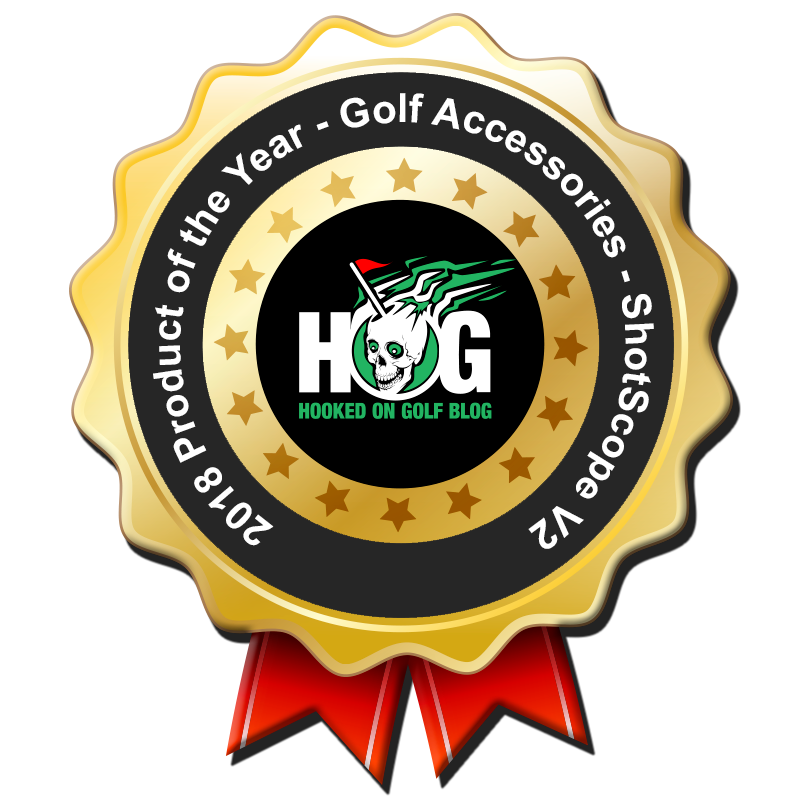 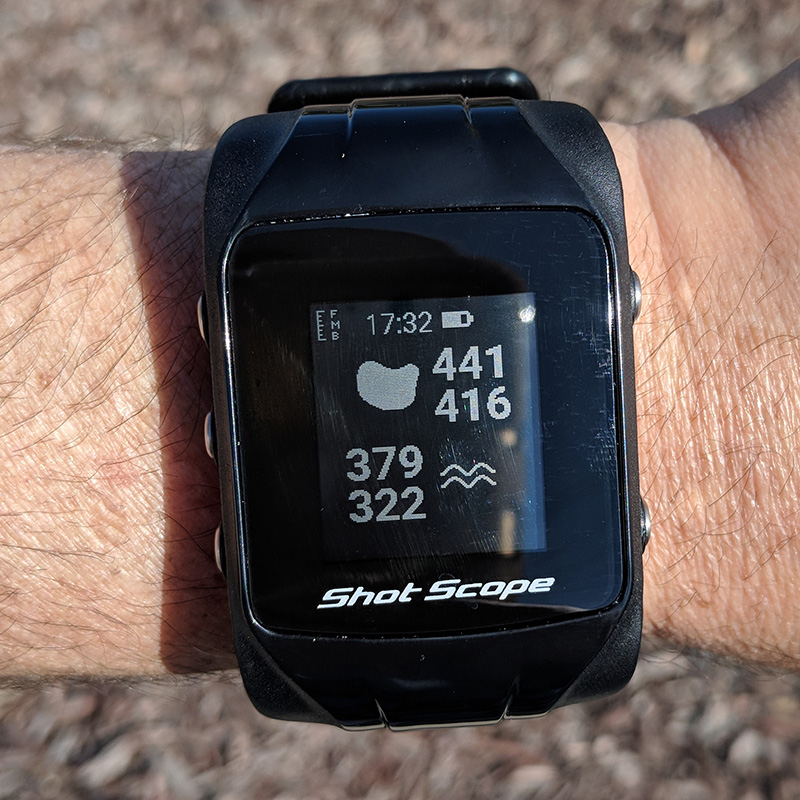 ShotScope plots the shots and information in a great interface either in a browser or mobile device, and shows the golfer every shot plotted on top of a map. 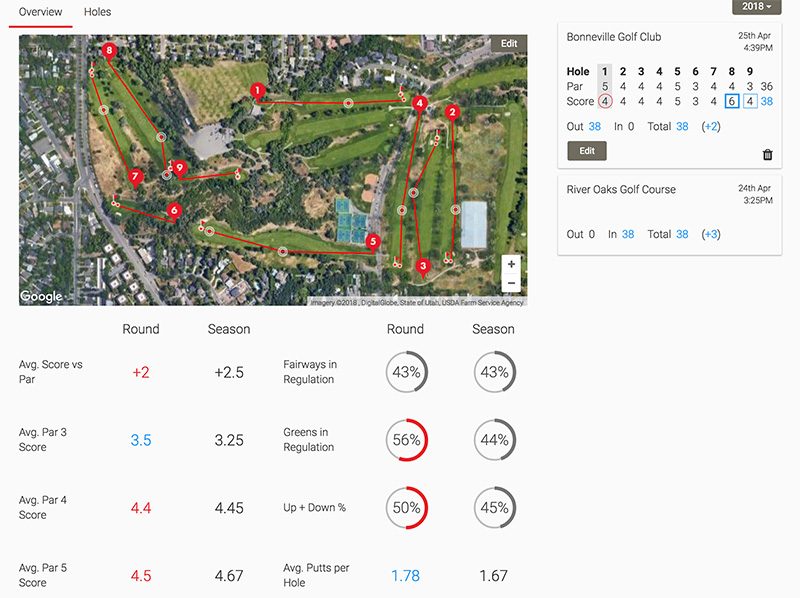 Hats off to ShotScope and congratulations on winning this prestigious award!

This has been, and continues to be an extremely interesting and informative golf accessory review for me. I’ve been working with the Shot Scope V2, a GPS Watch which also tracks all shots, distances, and statistics. The Shot Scope V2 combines the best of the GPS watch world and the shot tracking worlds of Arccos and Game Golf. Shot Scope V2 has some major advantages, which I’ll highlight shortly.  For now let’s take a look at the features of the Shot Scope V2. 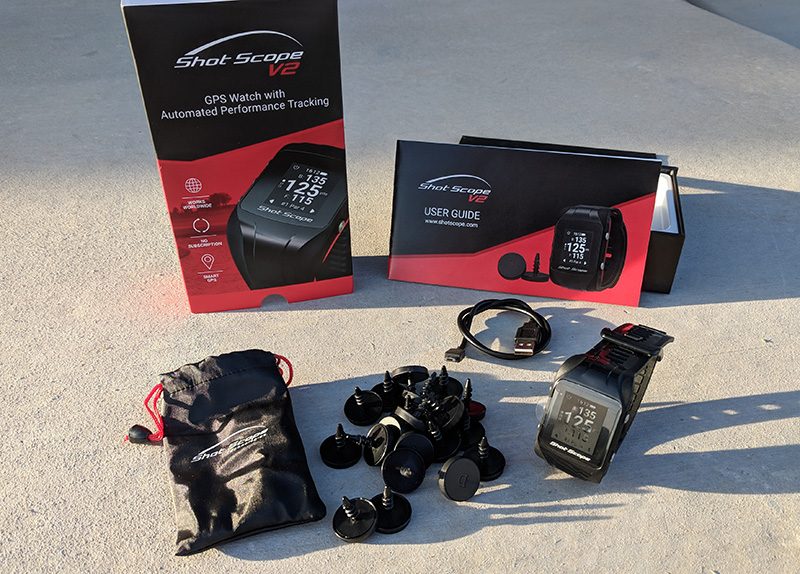 There are three modes in the SCV2: First is a standard GPS.  When running in GPS mode, the unit quickly and accurately shows yardages to the front, middle, and back of the green.  It also shows yardages to hazards.

The 2nd mode is Pro mode.  In Pro mode the golfer tracks his/her shots with each club.  Each club’s distance, accuracy and result is tracked. Later on at the computer or mobile device, the user can look at each shot over a map, or look at highly thought-through and educational club, game, and performance stats.

The 3rd mode (my go to mode) is GPS + Track.  Yes, this is the combination of GPS watch mode with full shot tracking.

As strictly a GPS Watch, Shot Scope V2 is fantastic. The GPS is very easy to read and the yardages are quick and accurate.  There’s not much more to it than making sure the watch has the course loaded before the round starts.  The watch will automagically pick the course if you’re on property. 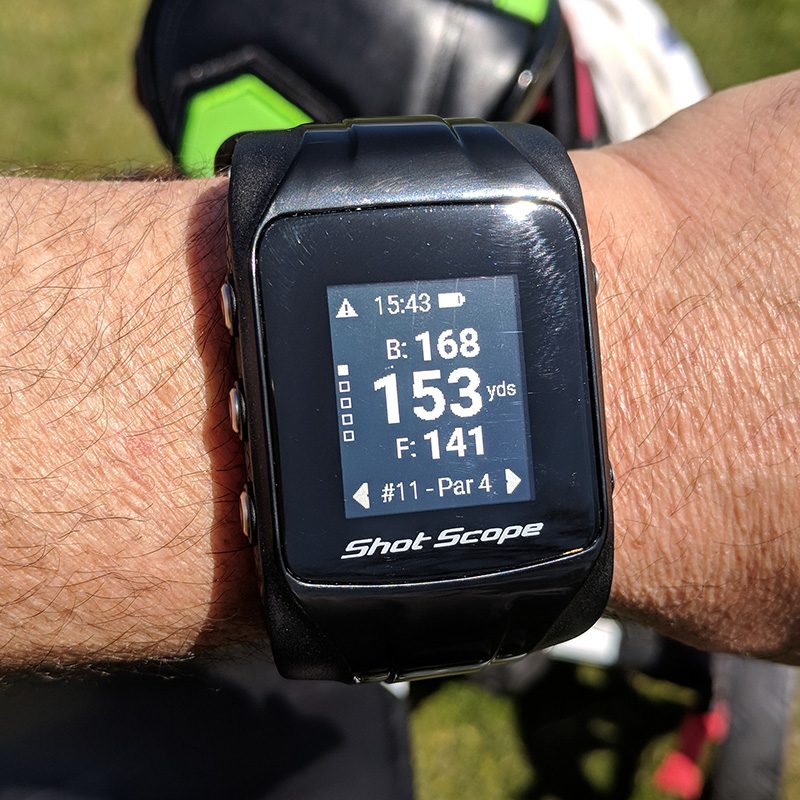 The GPS unit will also show distances to hazards as seen below.

To do the shot tracking, sensors are put on the end of each golf club.  The sensors (seen in the first photo in the lower-middle), easily screw into the air hole at the end of the grip.  In Pro or GPS + Track mode, the unit senses practice swings and real shots and what club hit them.  The unit must be on the golfer’s wrist.

Full swings and even putts are registered. However the unit does not “know” when the ball goes in the hole, nor does the unit know where the hole is. So the golfer must “tag” the hole location when finishing, and also select the number of putts.  This “tagging” of shots is very similar to using other products like Game Golf, except the only tagging necessary is the final putt. Even so, I often forgot to tag the final putt and had to fix the mistake later with the application.

After the round, the user syncs the data via the Shot Scope application. After syncing the data is available for analysis and editing if necessary.

I don’t wear watches and I’ve resisted wearing GPS watches while golfing. In fact, I typically connect the watch to my golf bag and check the yardage there before I pull a club.  I gave a good faith effort with the Shot Scope V2 and wore it while playing. I was surprised to find that the watch didn’t bother me or interfere with most of my shots.  I say most because there are a couple of situations where I did have issues.  I’ll mention those in my critiques section below.  In general, wearing the watch was not an issue, and the convenience of instantly knowing yardages by looking at my wrist is great.

This is where Shot Scope’s awesomeness shines.  Following the round I sync my unit with my computer, which uploads all my shot data to the Shot Scope website.  Once synced I can view every shot mapped on a Google map, see ball striking, fairways hit, putts per round, and more.

The wealth of statistics is tremendous, and very educational if not slightly depressing.  Yes I realized where my weaknesses were, but I also realized that…well, I’m not as good, or as long as I thought I was.  The only part of my game I knew was good is putting, and the stats back that up.

Below I’ll show a few of the interesting ways that Shot Scope V2 shoes the shot data and analysis.  This is great stuff.

Tee accuracy and how it translates to scoring

Above you can see scoring stats, and how they relate to accuracy off the tee. 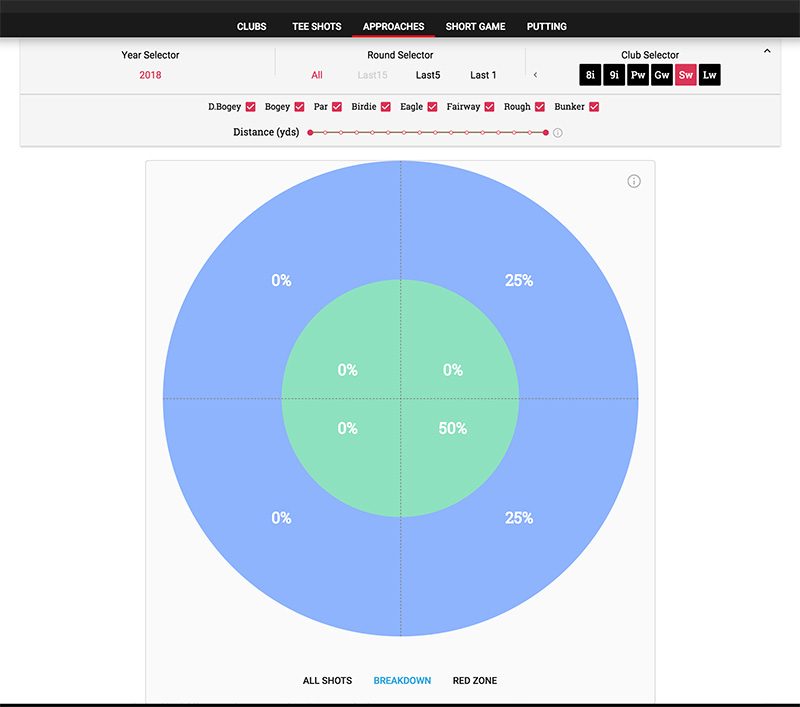 Above is a very educational analysis of my sand wedge. I hit 50% of my approaches with it, and 100% of my attempts are right of center. Quite telling. 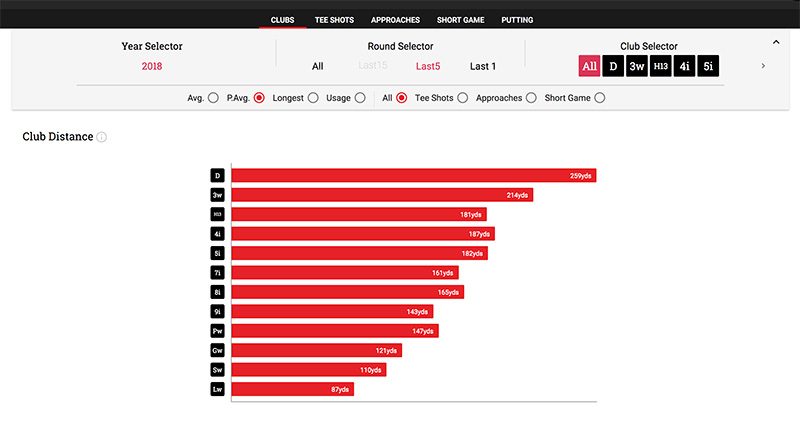 In the “performance average” above, outlier shots are thrown out so they don’t skew the numbers. What can I learn from this? Like most amateur golfers, I do not hit the ball as far as I think I do. 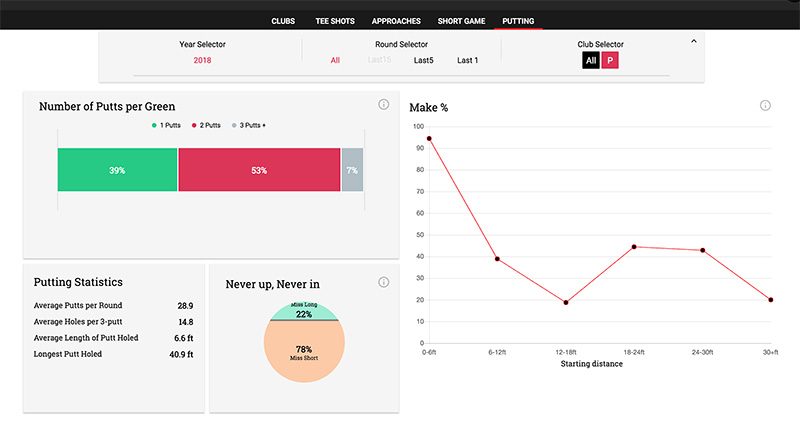 In all of my reviews I try to post some critiques and thoughts on what can be improved.  Shot Scope V2 is a fantastic system; probably the best out there for this type of data collection of one’s golf game.  That said, having to wear a large GPS watch can sometimes be inconvenient or interfere with the swing.

The metal fork that goes through the holes on the watch band can stick out. It often does not lay flat. When I’m choked down on a short game shot that fork has caught the club in my swing, causing an errant shot.

Tagging putts is something I’m not used to and even after many rounds, I still forget.  It’s not what I’m thinking about when I just missed a short putt to go 2-down in a big money game, or in league tournaments etc.

Occasionally shots are not registered, or the wrong shot is registered.  This is an issue which happens across every shot tracking system I’ve ever tried. Missed or incorrect shots can be edited after the round.

The wealth of information I’ve accumulated about my personal golf game this spring has opened my eyes to my weaknesses. I knew some of them, but seeing the raw numbers really clarifies and shows me what I need to work on.  As a result, I’ve been practicing harder on those weak areas.  One such area is greens in regulation.  I’ve been around 33%, which is not very good.  But with lots of work at the range and focusing on my irons and approaches, my last round was better, 50%. Still not as good as I want, but getting better.  For reference, the best player on the PGA Tour right now in greens in regulation is Henrik Stenson at 74%. The worst on Tour is 53%.

Thanks to the Shot Scope V2 I now have a much better idea of my tendencies with each club (sand wedge above for example), and how far I really hit them.  Armed with that information I can make better club choices and more confident swings on the course.

I can’t help thinking that Shot Scope V2, if used to its full capabilities, can really help golfers improve their game in both physical ball striking ways, but in the form of better game and course management.

Just received a Shot Scope V2 to be reviewed.  The Shot Scope 2 is an interesting combination of a GPS watch and a shot tracking device like Arccos or Game Golf.

The previously mentioned shot tracking systems are ok, but I always got irritated when I forgot to “mark” a shot. That happened several times per round.  Then when I’d look at my round on my computer or mobile device it would show that I shot a 58 in my round, which included 4-5 hole-in-ones on par-4’s.  I’d only remembered to mark the tee shot.

With Shot Scope V2 there is no marking shots. The system automatically senses the shot, and the club used.

Along with shot tracking, the unit features a smart GPS for font/middle/back yardages.

I hope to try this system out this week for the first time, and if it goes well I’ll keep it in play for several rounds, then post my review following that.  I will have to overcome my dislike for watches. I don’t wear one.  Stay tuned.