Broadcast Notes:
Schwab Cup Championship at Stake for Montgomerie, Maggert and Langer: Three players will tee it up with an opportunity to claim the season-long Charles Schwab Cup with a victory this week in Colin Montgomerie, Jeff Maggert and Bernhard Langer. The scenarios in which each can mathematically win the Schwab Cup are:
Montgomerie – Can finish 30th and win if Maggert finishes 18th or worse, and Langer finishes 14th or worse.

Jordan Spieth Mosaic in Dallas is Made From 24,152 Golf Balls

I don’t normally post items from PR companies which are less newsworthy/informational and more advertorial in nature, but this registered high enough on my cool-o-meter to warrant posting.  It’s a mosaic of Jordan Spieth which is on display at Main Street Gardens in downtown Dallas, TX.  Here’s the video timelapse below of the constructions, and under that is some text describing it.

Here are all the details about this unique work of art:

· The mosaic is of Jordan’s likeness
· 24,152 golf balls are used (placed on tees) with the grass acting as negative space; a team of 25 individuals worked to set up the mosaic
· The golf balls will be donated to the Dallas chapter of The First Tee, as well as the Northern Texas PGA.
· There will be a national ad campaign congratulating Jordan with this mosaic across TV and print starting Nov. 4
· The mosaic will be open to the public for up-close viewing on Wed., Oct. 28 and Thurs., Oct. 29; deconstruction of the mosaic will take place that evening
· There is a viewing platform so that the public can see the mosaic from above

Since signing a multi-year deal with AT&T in May of 2014, Jordan has helped AT&T promote the dangers of distracted driving by appearing in an “It Can Wait” commercial that aired during the 2015 Masters. Jordan’s golf bag also carries the AT&T logo. We’re looking forward to a another great year in 2016 and more collaboration with this bright star on the TOUR. 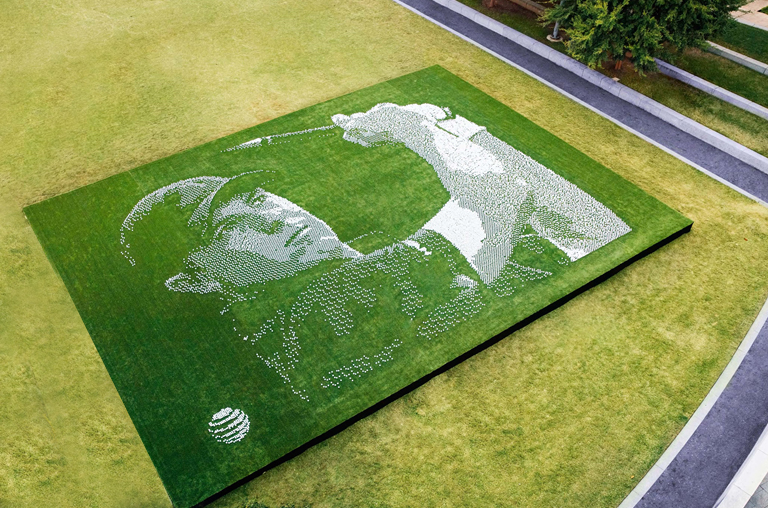 I wonder when AT&T is going to sponsor a Hooked On Golf Blog mosaic in a major city? #snubbedagain

Broadcast Notes:
2015-16 season kicks off: This week marks the first of 47 official events during the 2015-16 PGA TOUR season, with seven of those events being played in 2015.
Napa, Calif., resident Johnny Miller to contribute to Golf Channel’s event coverage: Napa resident and Golf Channel on NBC analyst Johnny Miller will make multiple appearances during Golf Channel’s telecasts of the Frys.com Open this week. Miller was instrumental in finding a new home for the event after previously being contested at CordeValle in San Martin, Calif.

Frys.com Pro-Am airing Wednesday at 9 p.m. ET: On Wednesday at 9 p.m. ET, Golf Channel will air the Frys.com Pro-Am, as players make their final preparations ahead of Thursday’s opening round. U.S. Presidents Cup participant Chris Kirk will be mic’d up during the Pro-Am and provide viewers with insight during his round. NBA star (Golden State Warriors) Stephen Curry has committed to compete in the Pro-Am.

Jordan Spieth: Player of the Year airing Wednesday at 10 p.m. ET: Immediately following the Frys.com Pro-Am show, Golf Channel will present a 30-minute special looking back on the memorable 2014-15 season of World No. 1, Jordan Spieth. The show will feature an exclusive interview with Spieth, conducted by Golf Channel’s Rich Lerner and Gary Williams. A roundtable discussion with Lerner, Williams, Damon Hack and Tim Rosaforte also will examine Spieth’s memorable season in the context of golf history.
PGA TOUR Season in Review airing on NBC, Sunday at 12:30 p.m. ET: Viewers will have an opportunity to recount the memorable 2014-2015 PGA TOUR season, with PGA TOUR 2015: Season in Review presented by Astellas airing Sunday, Oct. 18 at 12:30 p.m. ET on NBC. The special will examine the moments, biggest events and breakout stars from the past season on TOUR.

Broadcast Notes:
Charles Schwab Cup race continues with two events remaining prior to season-culminating event: With only two events remaining prior to the Champions Tour’s season-ending Charles Schwab Cup Championship, the race continues for the $1 million bonus prize. Colin Montgomerie regained the top place in the current standings with a T-5 finish at the SAS Championship. Jeff Maggert (39 points behind), Bernhard Langer (336 points behind) each have an opportunity to supplant Montgomerie with strong showings in the final stretch of the season. Montgomerie’s slim lead over Maggert is the second-closest race for the Charles Schwab Cup this late in the season since the Schwab Cup began in 2001 (Fred Funk led Jay Haas by 28 points with three events remaining in 2008).
Allen defends: Michael Allen defeated Marco Dawson by two strokes for his seventh career Champions Tour win.
Headlining the field: Colin Montgomerie, Jeff Maggert, Bernhard Langer, Fred Couples, Marco Dawson, Kenny Perry, Tom Lehman, Mark O’Meara, Kirk Triplett and Lee Janzen.

Broadcast Notes:
Format: Golf Channel will showcase back-to-back nights of primetime coverage of the 2015 World Long Drive Championship, featuring the round of 16 being narrowed down to eight competitors (Tuesday, Oct. 20), and the remaining eight dueling for the first place prize and $250,000 purse (Wednesday, Oct. 21). Golf Channel’s expanded coverage of the Championship also will include news and results of the qualifying rounds, Oct. 14-19, leading up to live coverage on Oct. 20-21. New to 2015, competitors will have 2 minutes, 45 seconds to hit their drives in each round, and the player who is trailing in the match will have an opportunity to hit one final ball past their opponent’s to try and advance to the next round in the bracket.