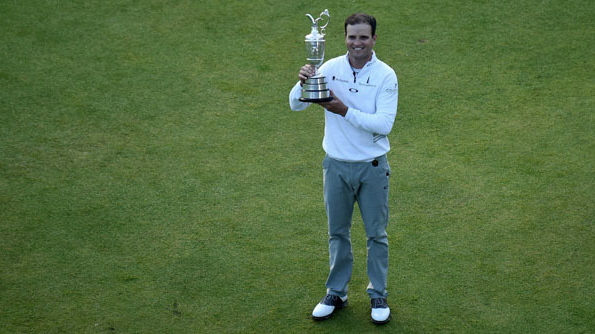 Zach Johnson with the Claret Jug

I was watching the (British) Open Championship and a Masters Tournament broke out!  A crowd of 47 billion players was in the hunt, with somewhere around nine players holding or sharing the lead during the final round today, Monday.

The storyline possibilities coming into the final round were all-world.  The hype coming into the event of course was the possibility that Jordan Spieth could capture the 3rd leg of golf’s “grand slam,” winning all four major championships in one season.  Spieth was close all day and an unlikely 50 foot birdie putt on the 16th made it seem as if his fate was to win.  At that point he was tied for the lead.  Unfortunately Spieth is better from over 20 feet than he is from eight feet.  He missed an eight footer for par on the 17th Road Hole to drop back to one shot behind the lead.  Fortunately he had the super-easy 18th hole, a driveable par-4.   Left with an awkward shot which was between clubs, Spieth’s 2nd shot found the “Valley of Sin,” a depression short of the green.  The birdie putt to join a playoff was off-left.  Grand slam dream over.

An even more unlikely and probably more historic dream was the possibility that an amateur could win the Open.  22-year-old Paul Dunne incredibly had brought himself to a tie for the lead after three rounds and was in the final group.  The last time an amateur was in the final group in the Open was Bobby Jones in 1927.  Nerves were too much for Dunne, who finished with a 78, taking him out of low amateur honors.  Still, he impressed the golfing world.  We’ll see him again.

Jason Day was one shot off of entering the playoff, along with Spieth.  At 25 I wonder if anyone has come so close in majors, so many times by this age. Heartbreak hotel.  I really like Day and hope his time will come.

Adam Scott was in the mix.  He completely melted on the final nine with a 40 which included missing a putt which looked to be no more than 12-18 inches.  That’s why he has the anchored putter I suppose.  Despite his 40, he still shot 71.  Wow.

Marc Leishman was one of three players to enter the 4-hole aggregate playoff, the other being Zach Johnson and Louis Oosthuizen.  Leishman’s story is one of inspiration, having nearly lost his wife to sickness.  In the playoff he could only manage +2.

Louis Oosthuizen made birdie on the 18th to join the playoff.  He struck the ball fairly poorly in the final round but managed his way well enough to tie for the lead at the end.  Even par for the four playoff holes (1, 2, 17, 18) was one stroke shy.

Hats off to Zach Johnson.  He managed his game around the Old Course, which was being eaten alive by long hitters for the first couple of days.  Johnson’s win is mostly attributable to his short game.  Hitting 94% of his fairways didn’t hurt, however.  Johnson birdied the first two playoff holes to open up a lead and never gave the lead up.  Surprisingly and quietly, Johnson stuck around and produced winning shots at the perfect time to become the champion golfer of the year.

Tiger Woods…  what can be said about Woods?  He shot his worst round ever at the Old Course (76) in the first round and couldn’t get it together.  Woods’s fall from the top is perhaps the biggest, fastest, most dramatic fall from the pinnacle the sporting world has seen.  Woods said he needed to check his spin rates to see what the problem was.

Yeah, go do that.

Bubba Watson has the length to eat up the Old Course, but links golf is a bit of a mystery to him.  When he figures it out he could win an Open, but as long as it frustrates him he will not be a factor.

Tom Watson’s history in the Open Championship is nearly without comparison, unless you go back to the 1800’s when Old Tom Morris was winning the even almost yearly.  Five times Watson has hoisted the Claret Jug.  Watson said goodbye to major championship golf on the Swilken Bridge, just like Jack Nicklaus did 10 years ago in 2005.

Thanks for the memories Tom.  Well played.

The Old Course played a little too easy for my taste this time around.  Players were taking divots and spinning balls back on some of the greens.  The ground has been so hard every time I’ve played there that I never saw a single divot.  In fact, getting a tee in the ground was a chore.  I would have liked to see the Old Lady show her teeth a little more with harder surfaces and more wind.

2015 was a fantastic open. So many great stories, some which I covered.  The Open Championship is always special at the Old Course in St Andrews.

On a course where many complained the big hitters had an unfair advantage, the player with the best short game won.