This was one of those special years where I had some tremendous courses in the running for the Hooked on Golf Blog 2017 Best Golf Course award.  In fact, I had to create a special category in order to award the two most deserving courses.  The 2017 HOG Best Golf Course award goes to a new course in the Dominican Republic, designed by Jack Nicklaus.  Drumroll please… 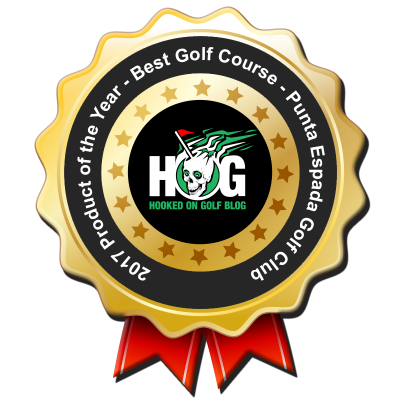 I was stunned by the beauty, flow, and atmosphere of Punta Espada. The golf course is located on the east coast of the Dominican Republic. If that location isn’t paradise I have no clue what is. The water is the most amazing color of blue, the waves crash near most of the holes, the white sand bunkers and the deep green grass of the course provides a brilliant aesthetic balance.

This piece of land is as amazing as any waterside course I’ve stepped foot on, and I’ve been on many of the world’s best.  I can’t stress enough how well Punta Espada utilizes the land. Where most waterside courses have a few holes on the water and many more inland, Punta Espada is the opposite.

Playing the course was extremely fun. It wasn’t a monster. It didn’t beat me to death but it did provide plenty of opportunities to challenge it, test my skills and test my nerve.

Far More Than I Expected

Having played many Jack Nicklaus designed courses I had a preconceived idea of what the architecture and the course would offer. I expected another “Jack course.” I didn’t get one. It wasn’t like the other Jack courses I’ve played. This was the most mature, natural, unforced, beautiful, mature Nicklaus design I’ve ever played.  I knew the location would be great, but the architecture made it even better, in a natural way. 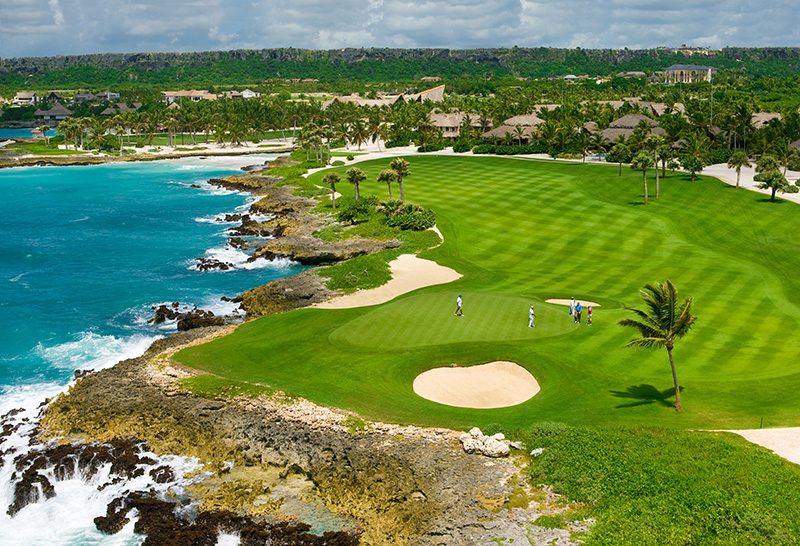 Major golf publications like Golf Digest and such have rated Punta Espada as the #1 course in the Dominican Republic and Latin America, and for good reason. It is truly a special place. I’m sure Punta Espada and Jack are happy about such recognition. But today I award them a far more distinguished and rare award, the 2017 Hooked on Golf Blog Best Golf Course.

Well done. Tip of the hat.

If you’re looking for a golf getaway or golf buddy trip, get to the Dominican and be sure put Punta Espada on the playlist.

From Utah to Michigan I’ve had this pair of men’s golf shorts and golf polo in play, both on and off the course, and in the air. 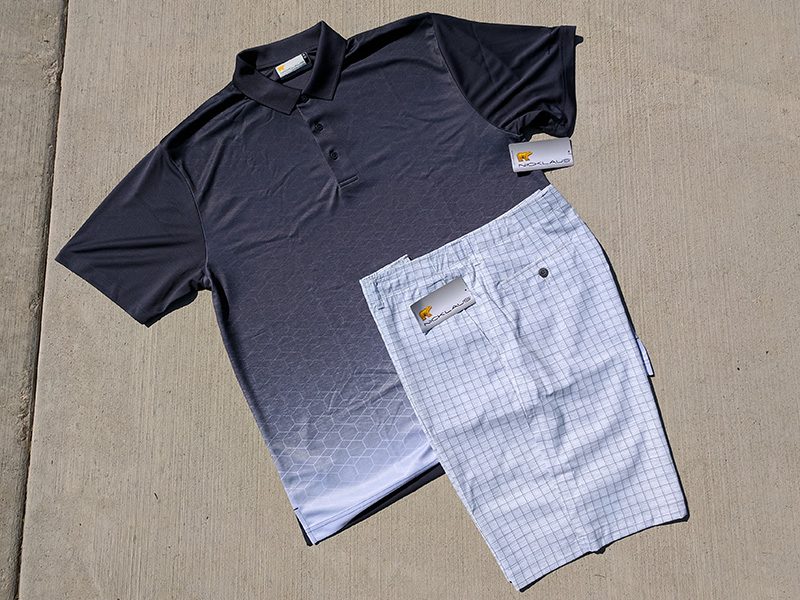 I’ve quite enjoyed sporting the Staydri Polo.  I’ve worn it in temps above 100F and down to as low as the 50’s.  Still comfortable all the way.  During the golf swing there is no binding, pulling or any restriction.  Plus it’s long enough that it won’t untuck after being pulled in a full rotation.

In the high temps the Staydri fabric helped keep me cool and dry with its moisture wicking properties.  If only it provided natural bug repellant too. That would have come in handy in northern Michigan a few weeks ago.

The shorts are very comfortable and fit true to size with a nice loose fit. They too flex during the swing.  Nothing worse than tightness at the belt line, causing restriction in the body’s rotation.

The fabric in these shorts is very light and smooth to the touch, but still durable and wrinkle resistant.  The pockets and buttons do their job nicely.

In a wide variety of conditions on and off the course, the Nicklaus Staydri polo and golf shorts are very comfortable, stylish, and high performance.  Nothing beats them for the very reasonable pricing.

Being a world famous golf blogger has its advantages… the big money, the hot women… but best of all is getting to check out killer golf apparel. Case in point today are some shorts and a polo from Jack Nicklaus apparel that aren’t even on their website yet.

I’ll be testing these out and reviewing them soon so stay tuned.

Naturally the press has gone into a complete Spiethgasm.  Let’s face it, we haven’t see a player this good since Tiger Woods and the numbers prove it.  By his 22nd birthday yesterday, Spieth had racked up five PGA Tour wins including two majors, the 2015 Masters and the 2015 U.S. Open.  He’s already a lock for PGA Tour Player of the Year.  When Tiger Woods was 22, he had six victories to his name, but only one major championship, the 1997 Masters.

For 15 years we’ve countlessly read and heard the nauseatingly repetitive debate in the press and on social media as to whether or not Tiger Woods would break Jack Nicklaus’s major championship record of 18.  Woods has been sitting on 14 since 2008 and there is no part of his current game which would lead us to believe he will win even one more, let alone five more.

So the discussion has moved to Speith.  At this early age he is already one major ahead of Tiger and unfortunately, that same discussion has begun:  “Will Jordan Spieth break Jack Nicklaus’s major championship record?”  Puhlease.  Let’s not put the golf cart in front of the golfer.  Even if he won two majors every year it would take him eight more years to tie Jack.   So many things could happen between now and 18 majors for Spieth.

In my sick and twisted mind I thought it would be great to produce a top ten list of ways Spieth could guarantee failing to break Jack’s record.  Someone had to do it.  But 10 wasn’t enough.

#8: Become a PR and brand puppet

#7: Become “Ranger Rick,” hitting flawless and perfect golf shots on the range but not being able to take them to the course

#6: Focus too much on “release patterns” and not enough on knocking a golf ball in the hole

#5: Focus too much on “traj” and not enough on knocking a golf ball in the hole

#4: Focus too much on “spin rates” and not enough on knocking a golf ball in the hole

#3: Fire swing coach and hire new one.  Break swing down completely and rebuild it from scratch to “get better”

#2: Fire new swing coach and hire a newer one.  Break swing down completely and rebuild it from scratch to get better… again.

There are only two things that make me cry every time I see them: 1. When Spock died in Star Trek Wrath of Khan. 2. When they hit the ceremonial tee shots at the Masters Tournament!

The Big Three hit their ceremonial tee shots. The 2015 Masters has officially begun.