Father’s Day gift alert! Here’s a fantastic gadget not just for golfers, but for anyone. I’ve been gaming the KeySmart Pro for awhile now.  KeySmart Pro is “the world’s smartest key holder.”  Check it out: 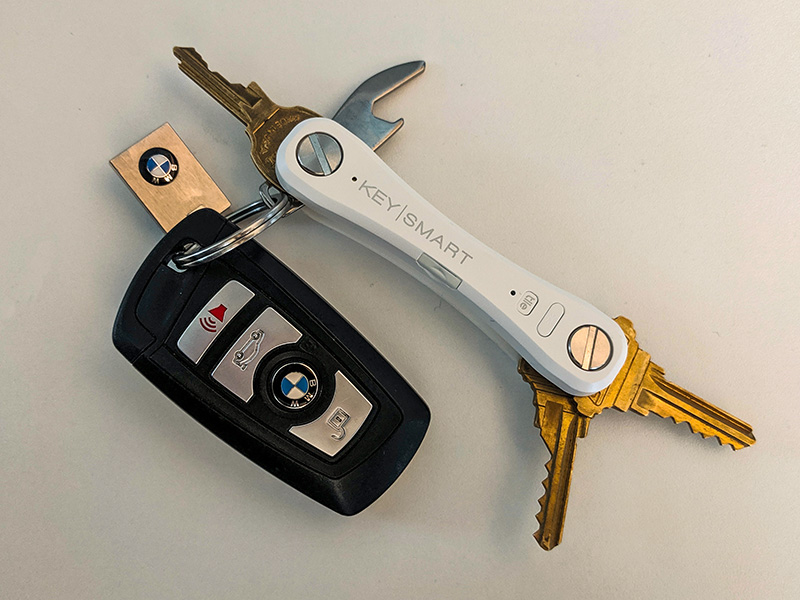 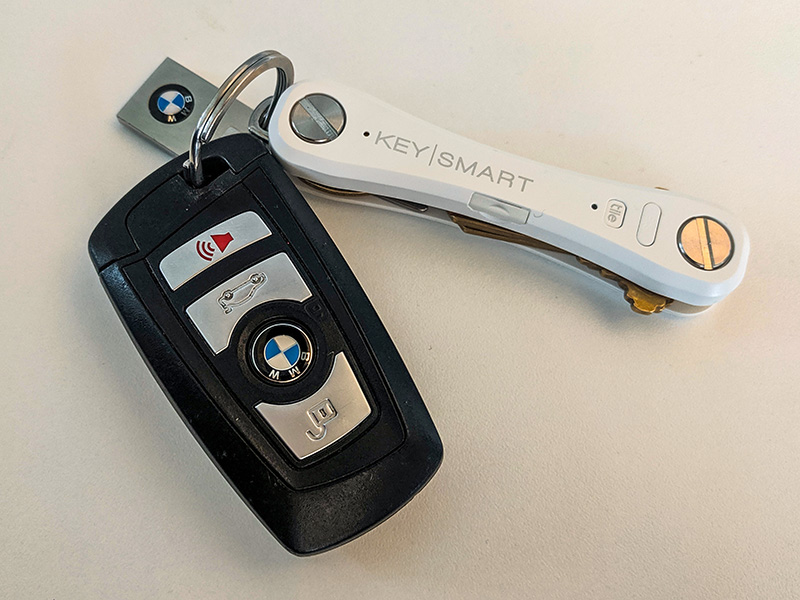 I’ve really benefitted from my KeySmart Pro.  To date I’ve quickly found my keys in the house by ringing the keychain.  I haven’t lost my phone (yet), but I have tested out the phone ringer and know I can confidently find my smartphone with KeySmart Pro. I’ve even used the built-in LED flashlight.

KeySmart Pro, available for $49 at getkeysmart.com, is a fantastic gift idea for Father’s Day, Christmas, or any gift giving occasion, and not just for men.

I admit I’m not a fan of golfers who play music on the golf course.  I think it is a bit intrusive. Plus most of the selections I’ve heard on the course are barf-worthy to my eclectic musical tastes.  Please do not play Gun’s N Roses, Nickleback, Hootie & The Blowfish, Kenny G, Pearl Jam… and for the love of God himself, NEVER play Coldplay, anywhere, anytime…. EVER.

I’m trying to open up my old-school attitude though, and I’m totally cool with playing music on the range, when playing alone, or when ALL of the members of your group are okay with it, so long as the tunes don’t bother anyone else on the course.  So when I’m in that situation, I’ve got a super cool 15th club in the bag, the Tune Driver bluetooth speaker.   Let’s take a look, er, um, listen. 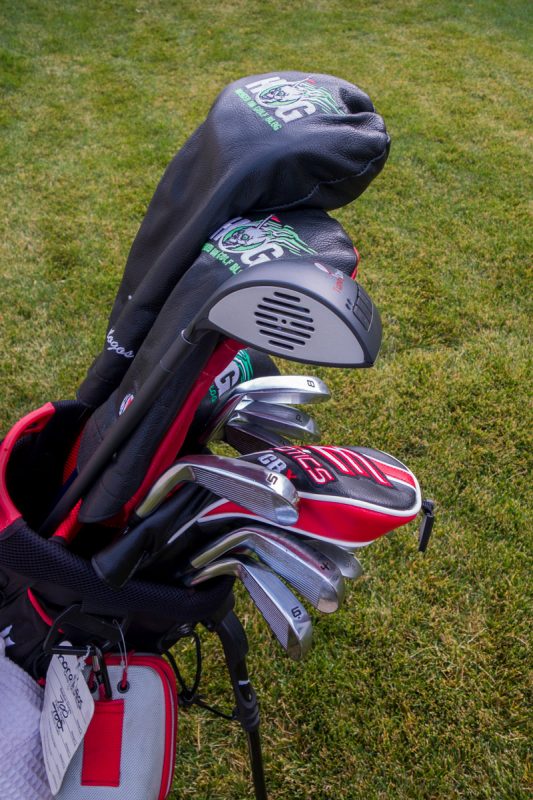 Above you can see the Tune Driver in action in my current gamer bag.  The speaker is much larger than speakers in any phone, so it can pump out much better volume and especially bass.  If I’m going to rock, I need to feel the kick drums.  I especially like super heavy instrumental metal with heavy guitars and technical double bass drumming.  Pound the listener into submission.

The Tune Driver receives its audio program via bluetooth connection.

The controls on the driver include the following buttons: power, mute, volume up, volume down, and bluetooth.

The shaft comes in separate segments so it can be unscrewed and stored/transported easily.  The unit will work without the shaft, so some may choose to just use the head only.

To charge the speaker simply plug it into a USB port via the included USB charging cable (photo below). 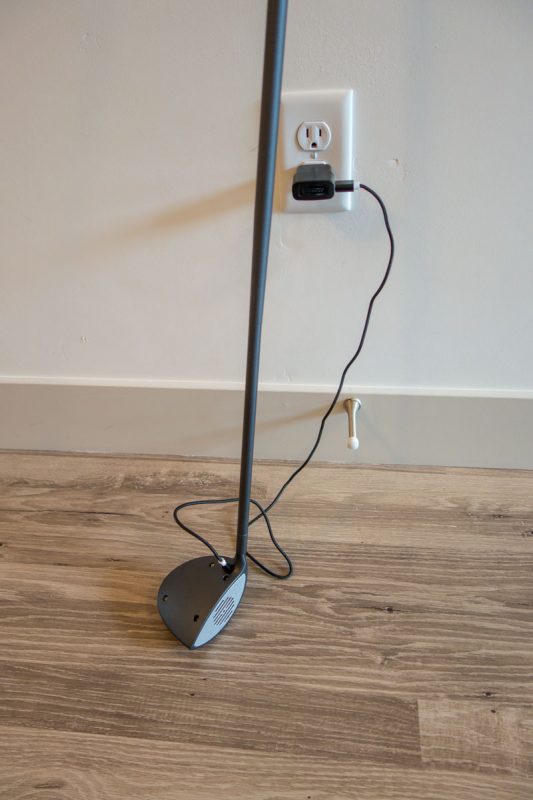 The video below shows the Tune Driver in action, but the video can’t come close to reproducing how good the audio quality is.  The speaker can really pump out the volume and the tone is super.

Connecting the Tone Driver to any bluetooth device is easy.  I’ve used it not only on the course, but it has found a solid place in my garage where I can do “man garage” things and listen to some decent tunes or radio. 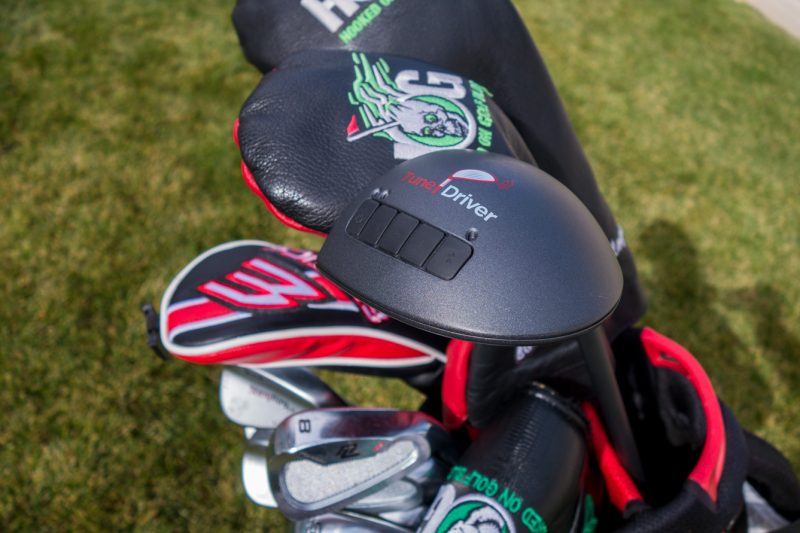 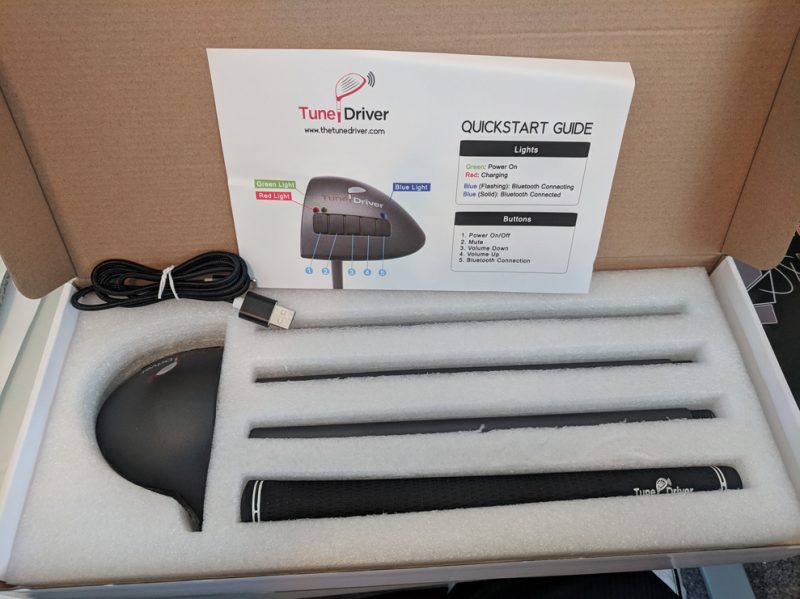 The Tune Driver ($110) is made of solid materials and produces super bluetooth audio.  It is great for enjoying programs on and off the course.  Tune Driver would make a great golf gift. Just make sure the tournament committee doesn’t count it as an illegal 15th club!

This May Be The World’s Best Golf Accessory

I’ve finally put a TaylorMade driver into play. No it isn’t the TaylorMade M1, or M2 or M5 (wait, that was Star Trek)… It’s a Tour Preferred 8.5 degree midsize System2 driver. This thing is a beast. Nope, it’s not adjustable. Can’t tweak the loft or the lie or adjust the compass on the bottom to north. All this driver does is open beer bottles and boy does it do a fantastic job.  I’ve really tested this golf driver head bottle opener hard. 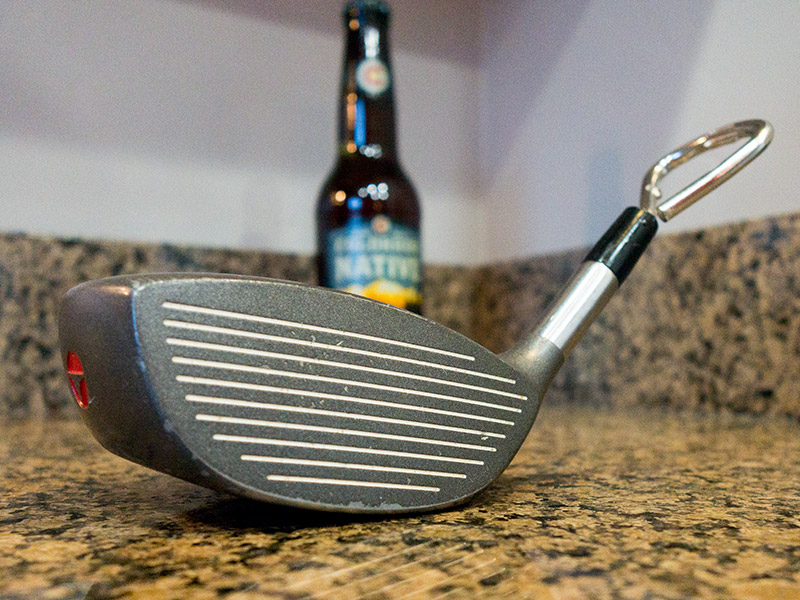 One can’t be too safe when it comes to golf accessories this important. A solid backup is a must. That’s why I have the Wilson Patty Berg Autograph persimmon driver, below. 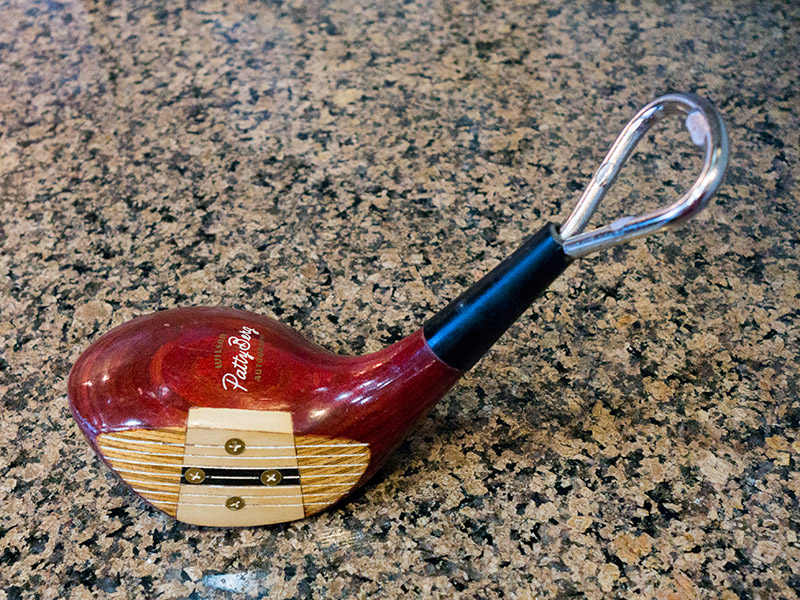 This great use of old golf clubs is courtesy of a long time friend of the blog named Scott Jesse.  Scott is a veteran and former golf pro who has a history of making some neat golf accessories. 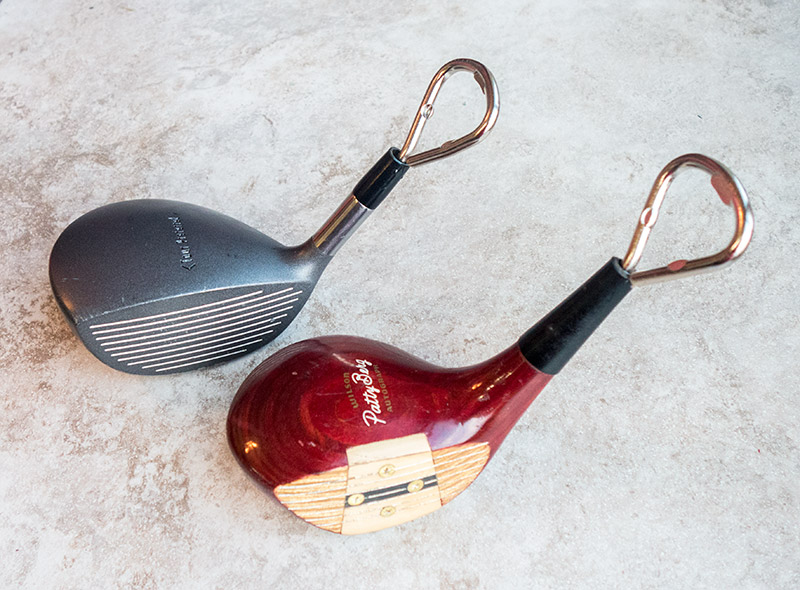 These bottle openers can be purchased for a mere $15 plus shipping through the Elmjay Antiques and Up Cycle Facebook page.  That beats the hell out of buying a $500 driver that will be obsolete and $24.99 in the used bin at the golf store before you reach the top of your backswing.

Think of Father’s Day, Christmas, birthdays for golfers… So many great applications.  How about these being the default openers at your golf club? 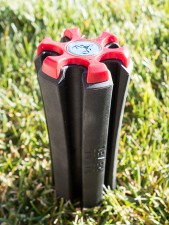 What the heck is this?

There’s probably nobody on the planet who has more golf gadgets in his/her house than me.  10+ years of running a popular golf blog will do that.  Most of the gadgets are useless pieces of plastic and metal that some poor aspiring golf entrepreneur blew his retirement fund on in hopes of selling a million of them.  Likely the poor sap as 5,000 of them sitting in his garage, shipped directly to him from a plant in China that screwed them up and took his money.

I thought the SILO Golf Club Carrier by Rival and Revel would be another one of those useless gadgets I trip over in the middle of the night on the way to the bathroom, but after playing with it I’ve changed my opinion.

So what is the SILO?  It’s a golf club carrier which carries up to six clubs, three tees, and a ball marker.  The intended use is for times when carrying a full bag of clubs isn’t needed and just a few are necessary.  Those times might be practice sessions, rounds on smaller courses, or perhaps using it to carry wedges and a putter right of one’s main bag.

I’ve played in a lot of 3 and 4-club tournaments, and the scores are nearly the same for the players as when they play their usual 14 clubs.  So why not knock it down to six clubs and carry 80% less weight around?

I’m currently planning my third trip to Scotland.  Golf over there is very different than here in the USA.  I’ve learned what clubs I use over there and what ones I don’t.  Most of my wedges are useless over there, especially a lob wedge.  I could easily go with a sand wedge and get rid of the gap, lob, and maybe even pitching wedge.  The only reason I would keep the sand is to get out of pot bunkers.  I never used 3-wood either.  I could easily drop 2-3 irons.  The ball rolls forever there, and it’s about feel.  I’ve thought of bringing a pencil bag with about 8-10 clubs, but now I’m toying with the thought of bringing the SILO and six clubs:  Driver, putter, sand wedge, 5-iron, 7-iron, pitching wedge… or perhaps driver, putter, SW, 4-iron, 6-iron, 8-iron.

There are three tee holes on the opposite end of the unit from the magnetic ball marker.  I could not get a tee in there.

I would love to see a SILO-8 or SILO-10.  The 8 or 10 representing the number of clubs it holds.  I would like to see a wider unit and down the center one could store a sleeve of balls (not in the sleeve of course).

Would a tour pro use this golf gadget?  Probably not.  But for practice, quick nines, or perhaps a trip to Scotland the SILO could be a great alternative to a golf bag Joe golfer. 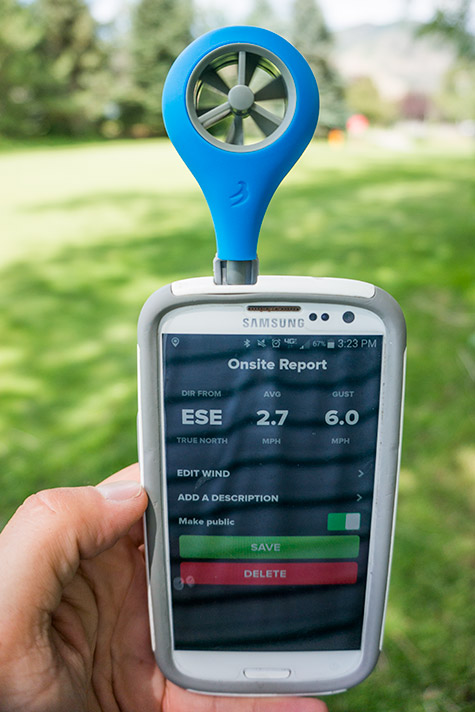 The Wind Meter shows some great data which can be very useful on the golf course or doing other outdoor activities.  I use the unit for golf, and for checking current wind conditions when flying my remote control aerial photo/video helicopters.   Other applications might include flying, sailing, fishing, windsurfing, and more.

The data can then be processed by the user, or even shared with other users.

This device is great for information gathering before a stipulated round or tournament round.  It is not legal to use such a device during said rounds.   Knowing wind speed and one’s one game allows the golfer to compensate and choose the proper club when hitting against or with the wind.

After feeling the winds and seeing the actual numbers, a golfer can get a much better idea of wind speed without having to use the unit all the time, therefore having a better idea how to play shots in stipulated rounds or tournaments.

The Weather Flow Wind Meter is a fun and useful $34.95 investment which can help golfers or those who need to know wind conditions in order to perform their best, and be armed with the most complete information they can.