There is No Rivalry Between Rickie Fowler and Rory McIlory

Rivalry is defined as “competition for the same objective or for superiority in the same field.” It would seem Golf Channel (and other media) are guilty of trying to manufacture a rivalry which does not exist. 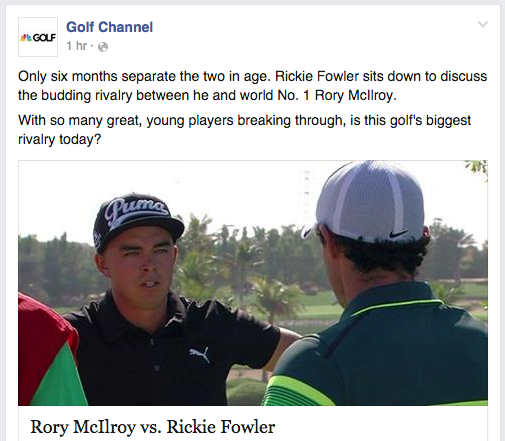 Slow news day I guess… Still this beats hot tour wives and girlfriends. At least it is about golf.

Let’s look at the wins for McIlory vs Fowler and see how much of a rivalry there really is at this point.

The numbers speak for themselves.  There is no rivalry.  Not even a “budding” one.  Until Fowler actually wins, this discussion is wasted brain cells.

This week’s “bonehead of the week” goes to Golf Channel.  I’m fairly sure that Payne Stewart did in fact have two feet.  Not a good photoshop job. 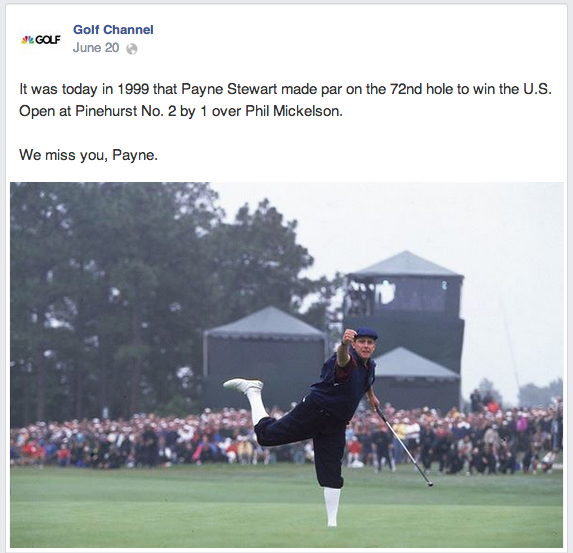 Bugger! Where did his foot go?

Also odd that the image is sort of foggy, yet Payne is standing out crystal clear…

Thanks to reader PJ_ONeal for commenting. PJ believes (see comments below) that this is not a photoshop fail, but likely a camera angle in which Payne’s foot was chopped off. I disagree, based on years of graphic design and photoshop. Plus, there’s nothing in the same area of the green to indicate a different level. For fun I did look closer at the image in photoshop: 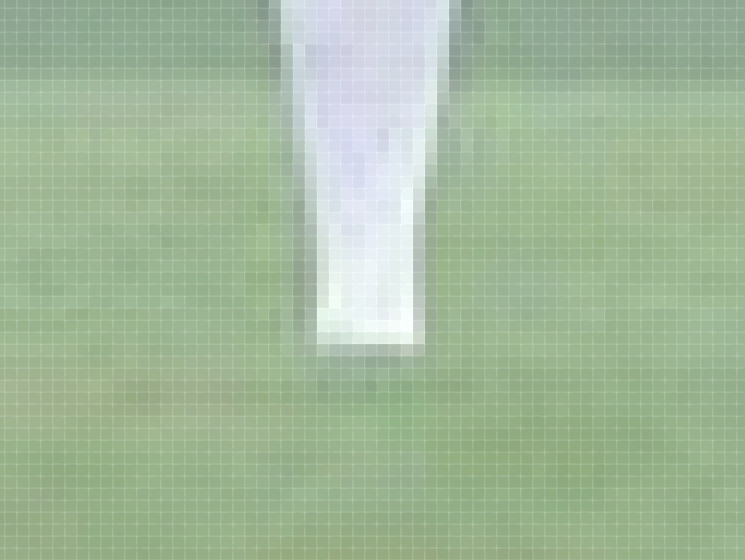 Here’s a shot from another angle…

Still looks like a bad photoshop to me.  But if I’m wrong I’d love to hear about it.  I’m more than willing to take a lump if it is deserved.

Golf Channel announced the latest in their Big Break reality show, “Big Break Florida.” This version will feature an all female cast and will be hosted by Tom Abbott and Melanie Collins. 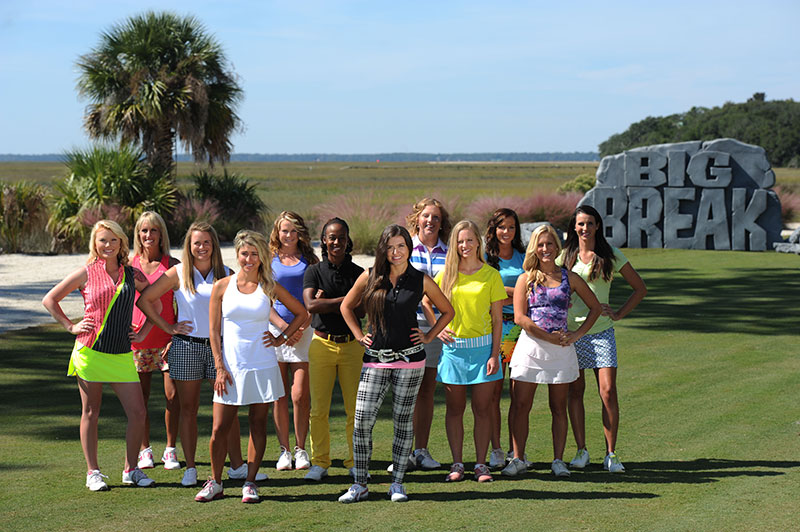 State of the Game: Golf Through Arnie’s Eyes

Through Golf Channel, the King Arnold Palmer has published his 2013 State of the game:

STATE OF THE GAME: GOLF THROUGH ARNIE’S EYES
By Arnold Palmer
Published December 29, 2013

This is the season of nostalgia. As one year of memories gets packed away, another filled with opportunity beckons. Before we jump headlong into 2014, I’d like to take a few minutes and remember some of the good people we lost in 2014.

My formative experience with losing a loved one came in 1950. I was a senior at Wake Forest when my roommate, Bud Worsham, was killed in an automobile accident. Bud was my best friend; in fact, he was the reason I had attended Wake Forest in the first place. What made his loss even harder to handle was the fact that I might very well have been in that car that night had I not opted to skip a Homecoming dance and instead attend a movie.

I bring that up because there’s not a day that goes by that I don’t think of Bud Worsham. There’s not a facet of my life that hasn’t been improved for knowing him, albeit so briefly. I’ve lost many loved ones over the years: my father in 1976, my mother in 1979 and of course, my wife Winnie in 1999. But Bud’s death taught me the lesson—wrenching as it was—that death is a part of life, and that the memories are worth the pain. I celebrate that lesson in remembering these departed friends.

Miller Barber: If all you knew about Miller Barber was his golf swing, you’d say he had no shot. He had the ultimate chicken-wing right arm and held the club virtually perpendicular to the ground at the top of his backswing. But what people overlooked with Miller—as they do with most good players with unorthodox swings—was that he had a great release through the ball. And while he may not have been the most athletic looking player, Miller was very strong and very powerful.

He also enjoyed a pretty colorful nightlife, though one that was opaque to the rest of us. In those seemingly simpler days, groups of us would often get together and frequent the same bars or restaurants, but Miller never told us where he was going that night or where he’d been the night before. As a result, our PGA Tour colleague Jim Ferree dubbed Barber “The Mysterious Mr. X.” Over time the moniker was reduced simply to X.  Up until the last time I saw him, I still called him X, not Miller.  He had a great sense of humor and took to the nickname.  But he also remained the man of mystery and a very close friend.

Like Jones, even though he lived a full life off the course, Bill regularly competed against the best players in the world. Although he and I were never paired together in a major championship, we did compete in 1965 when Jack Nicklaus, Gary Player and I took on three outstanding amateurs in Bill, Deane Beman and Dale Morey. I wasn’t playing my best, and as we were walking down the fairway I was trying to keep a positive outlook. I said to Bill, “My father always said to me, ‘He can who thinks he can.’ Bill, do you believe you can force yourself to do things?”

Bill said, “Well, Arnold, I can’t argue with that. You’re pretty strong evidence of it.”

Perhaps the story that best illustrates Bill’s exalted place in the game came from Jack Nicklaus. Years ago Jack had been debating the finer points of amateur status with Frank Hannigan, the former executive director of the USGA. Jack said to Frank, “Name one top amateur who doesn’t take anything from the manufacturers.’

“Bill Campbell,” replied Hannigan. Jack paused for a moment. “Okay. You can have Campbell,” he said. “Name another one.”

Frank Stranahan: Stranny, who passed away in June, is one of the most overlooked talents in the history of the game. This guy was sensational. He pretty much won everything there was to win as an amateur, including three North and Souths, three Western Ams, two Canadian Ams and two British Ams. The only important amateur trophy that eluded him was the U.S. Amateur, in which he finished runner-up in 1950.

Given that he came from a wealthy family (his father founded Champion spark plugs), many of us expected Frank to remain a lifelong amateur, but he turned pro and won six times on the PGA Tour before leaving competitive golf in the mid-1960s to focus on business. “Muss”, as we also called him because of his fastidious appearance, had the complete package: a terrific game, dazzling good looks and lots of money. People credit Gary Player with bringing fitness to the game of golf, but Stranny, who used to travel with barbells in his suitcase, was a devoted fitness buff and health nut. He ran dozens of marathons, and competed in bodybuilding and weightlifting well into his 70s.

One last note about Frank. I am often given credit for “salvaging” the British Open in the early 1960s. We can argue whether or not the game’s most historic championship really was in danger of sinking, but it is safe to say that after World War II, many American competitors simply found it easy and more profitable to compete here in the United States. Frank never quit on the Open. He continued to compete there on a regular basis, and finished second in 1947 and 1953. His devotion to the Open Championship is what inspired me to go over in 1960. I won the following year, and I’ve been credited ever since with “saving” the Open, but it was Frank who paved the way.

Pat Summerall: His Fox Sports colleague John Madden put it best when he said of the millions of sports fans who embraced Pat Summerall’s mellow brand of broadcasting, “They invited a gentleman into their homes.”

Whether it was football or golf, Pat became as much a part of the fabric of American sports as the leather on the arms of our easy chairs. I thought it was a beautiful gesture when Augusta National Golf Club offered him membership upon his retirement from television. Though out of the spotlight, the final years of Pat’s life, when he reacquainted himself with the most important thing in anyone’s life, family, were some of the happiest he ever enjoyed.

Ken Venturi: Ken became well known to casual golf fans when he joined the television booth in the late 1960s, but he was a force in the game as early as the late 1940s. A student of Byron Nelson and frequent playing partner of Ben Hogan, Ken was a formidable talent whose career was both sparked and unraveled by physical ailments. He first took up golf as a 13-year-old in response to his teacher’s diagnosis of Ken as a “an incurable stammerer.” He took up the loneliest sport he knew.

His ironman performance in winning the 1964 U.S. Open while battling severe dehydration remains the hallmark by which on-course toughness is measured. But ultimately it was another physical challenge, carpal tunnel syndrome, that forced his early retirement in the late 1960s and encouraged his transition to the broadcast booth.

Ken and I will likely forever be linked by a rules decision invoked while playing in the final round of the 1958 Masters. On the 12th hole, I hit a 6-iron off the tee and my ball plugged into its own pitch mark on the back fringe of the green. The ground was wet and soft, and a local rule providing relief from an embedded ball was in effect all week. I was leading by a shot, and just to be safe I called over the rules official, the late Arthur Lacey. I proposed that I could lift, clean and drop my ball without penalty to a spot as close as possible to the original position and no nearer the hole (a stance with which Ken agreed), but Lacey disagreed, saying I had to play the embedded ball. I knew I was right, but I wasn’t in much of a position to argue. Finally, I said, “I’m going to play two balls and appeal to the tournament committee.” I knew I had that option under Rule 3-3a.

Lacey objected, saying, “No sir, you cannot do that either.” I told him, “Well, that’s exactly what I’m doing.” I played the original ball as it lay for a 5 and then announced that I was about to play a second ball. I dropped to a clean lie and made par. Ken objected, saying that I was required to announce to him that I was going to play two balls before I played the original. The officials on site at the Masters reviewed the case, agreed with me, and I won my first Masters by a shot.

That incident affected our relationship. We both wrote about it in subsequent books, each of us insisting that we were right. I think the whole episode says more about the confusion built into the Rules of Golf than it does about me or Ken. I regret that the incident affected our relationship. Ken was a remarkable human being, and a warm and true friend to thousands of people in and out of the game. 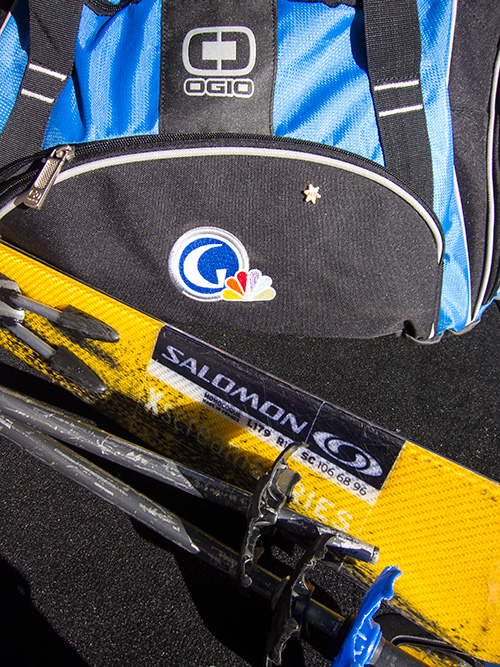 I keep my ski goggles, gloves, hat, scarf, ski boots, GoPro and all my other golf accessories in there.

Great bag by OGIO.  Glad it has the old logo and not the new one.