On the 15th hole of the City Amateur tournament this weekend two players were using their lasers to get a yardage.   It’s a long downhill par-3.  “248,” the one player said to the other after 10-15 seconds of shooting.  “Yup that’s what I got,” the other player replied.  Seemed off to me but they both shot it.  Player one then proceeded to knock his shot over the green.  I got out my Bushnell Pro X2 laser and shot it at 228.  The green slants toward the tee uphill, and the flag was on the front.  I suspect each of those two guys was aiming at the flag, but their lasers were reading the back of the green and not the pin.  My X2 locked onto the pin instantly.  That’s a great example of my X2 story.  It locks on so quickly and accurately. 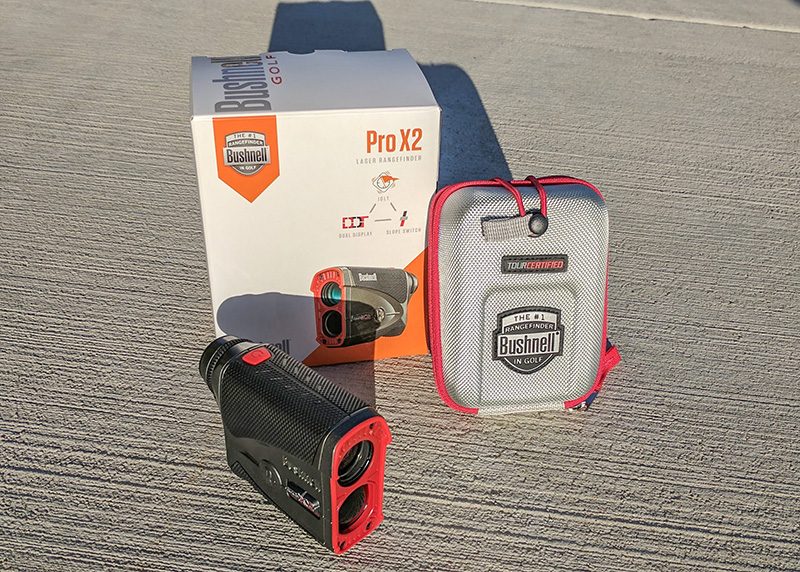 As I mentioned above, this laser is super-quick.  I’ve used at least a dozen varying laser rangefinders and the X2 locks onto the pin faster than any of them.  I prefer to use the red LED display, part of the DDT (dual display technology).  The red is very easy to red and vibrant.

Being somewhat of a rules stickler, I’ve never used slope on any lasers in the past.  During some non-tournament rounds on my very hilly home course I decided to try out the slope.  For years I’ve calculated yardages by experience and feel.  The slope in the Pro X2 shows the estimated yardage the shot would play if it was flat.  For instance, the par-3 6th at my home course is 186 but quite a bit downhill.  The slope rating in the X2 made it pretty clear why I’ve often hit my shots too far.  I’ve calculated the downhill as 10 yards, so playing to 176 but according to the X2 it plays as 170, about another half club.

The slope switch on this unit is quite convenient.  Unlike the previous slope model Bushnell, there’s no taking off a plate to change the slope.  That was somewhat inconvenient and the plates could be easy to lose.

The size of this unit is great.  It easily fits in the palm of my hand.  The technology is getting better, allowing for smaller devices.  In the old days the Pinseeker models were obnoxiously large.

The Jolt feature is one I’ve grown to depend on.  When the unit is locked onto the pin, it gives a quick buzz or vibration.

I’ve played in several rain storms with the X2, a couple quite heavy.  No issues at all so the waterproofing works well.

The Bushnell Pro X2 is an industry leader without a doubt.  The features, technology, and performance are unmatched.   That performance and quality comes with a sticker price of $499 which is well worth it in my opinion.  There are definitely less expensive options out there, if you like hitting your 248 yard club for shots that are 228.

The battery to my (now former) laser rangefinder died last week on the first fairway.  I was quite surprised how accurate I was during that round with guessing yardages.  Thankfully I don’t have to go to the store and find one of those weird CR2 batteries or whatever they are. I’ll be replacing that dead battery and laser with a whole new laser I’ll be testing, the Bushnell Golf Pro X2 Laser Rangefinder.

My review is pending my testing. I’m compelled to point out that Father’s Day is coming up and the arrival of the new Pro X2 is perfect timing.  Based on my previous reviews of Bushnell Golf’s products I’d be willing to place a bet that dad will think you’re the most awesome person ever if you pick him up a Pro X2.  I’m confident I’ll be backing up those statements in my full review around the 1st of June. 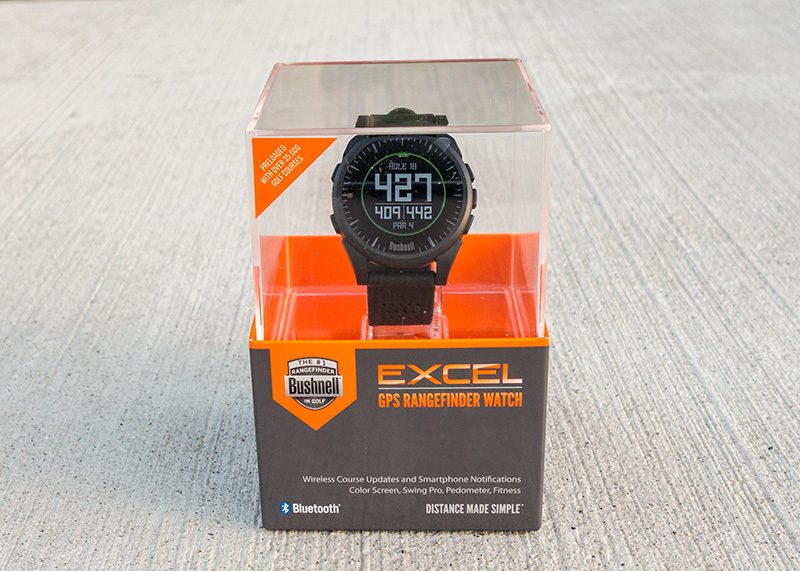 This GPS Watch does more than a typical golf GPS. Here’s a short list:

I’ll be starting my testing tomorrow in Wednesday league and posting a review before Father’s Day, hint hint.

Golf GPS rangefinder watch technology is improving. No longer does the golfer have to wear a ridiculously large device to have GPS yardages and other great features on his or her wrist. Case in point is the new Bushnell neo iON GPS rangefinder watch. Let’s take a look. 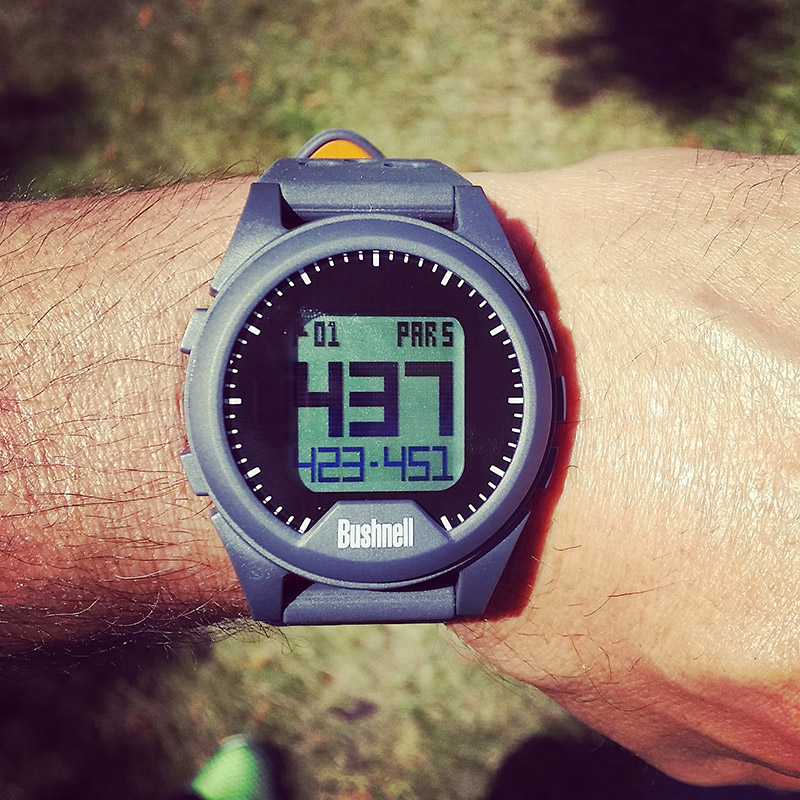 In the photo above I’m either playing a really short par-5 and I’m on the tee, or I just duffed my drive and did the walk of shame 50 yards forward from the tee. Take your pick. But the display does give a good example of the core information I need when approaching a green, the front yardage, middle yardage, and back yardage. Here’s a list of all the basic features of the Bushnell neo iON GPS Rangefinder Watch:

One of the most irritating things about many golf GPS devices, watch or others, is the amount of time it takes them to recognize what course they are on. In fact, some of the GPS units I use never find the course.  This unit finds the course very quickly and does not lose it.

During the round the yardages are solid and quick.  I’ve confirmed them with markers on the ground and via laser.  Rock solid.  Sometimes it’s better to think about the front or back yardages of the green.  Say you have a green with a false front which repels shots.  Knowing the right number to avoid that spot is a great advantage.  The same goes with pins that are long.  If the green has a bad drop behind it or deep rough, long is dead.  Knowing these yardages arms the player with great information for a better approach strategy.

The pedometer is a very cool feature.  My phone has one, but it isn’t as accurate, and it drains the battery badly.  Knowing how many miles I’ve walked is also great.  A 7,000 yard course may calculate out to four miles, but the walk can be double that or more.  After all, the golfer doesn’t hit straight shots.  Left. Right. Left. Right.  You get the drill.

Another great bit of information the unit provides is shot distances.  One may “think” their 9-iron goes 140 yards when in reality it goes 132.  Knowing exact yardages, and accepting what they really are, will save strokes.  If only I could teach myself to accept them… That’s another discussion. 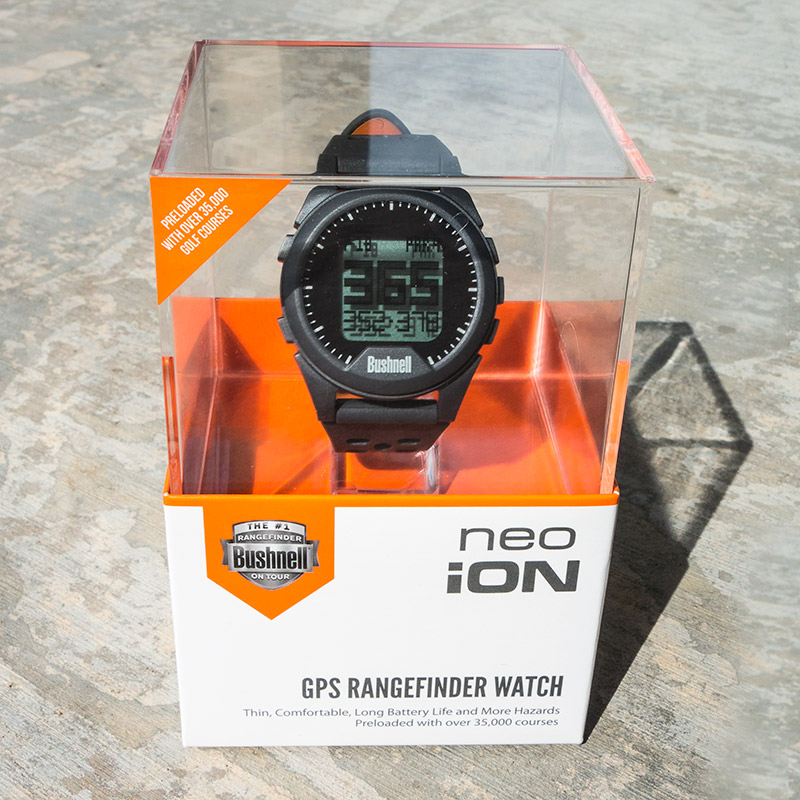 The battery life of the iON is great.  I’ve squeezed two full rounds out of a unit before charging.  I think I could have gotten more out of it but wanted to be sure I had a full 18 for my next round.

I have the same critique for this unit which I have for 99% of the golf GPS watches I’ve reviewed, the proprietary charging cable.  Why is it so hard for companies to put a standard micro USB plug on these units?  That way one could charge it with a standard cable should he/she forget to bring the proprietary one.

The other issue I have with GPS watches is the fact that they are watches.  I’m not a watch wearer and I find them especially uncomfortable in the golf swing.  So I usually attach them to my golf bag.  It would be nice if the unit could be stand alone, without the band.

Though it retails for $199.00, I’ve found this golf GPS watch on sale at Amazon for only $149.00.  Considering all the features and performance this is a great deal.

Father’s Day is coming up later this week.  Dad would love one.

For a few months I’ve had the Bushnell 201540 Bushnell Tour X Jolt Golf Laser GPS/Rangefinder in play.  I’ve been very happy with the performance and accuracy of this rangefinder.  If only I could be as accurate at hitting my yardages as this unit is at supplying them to me. 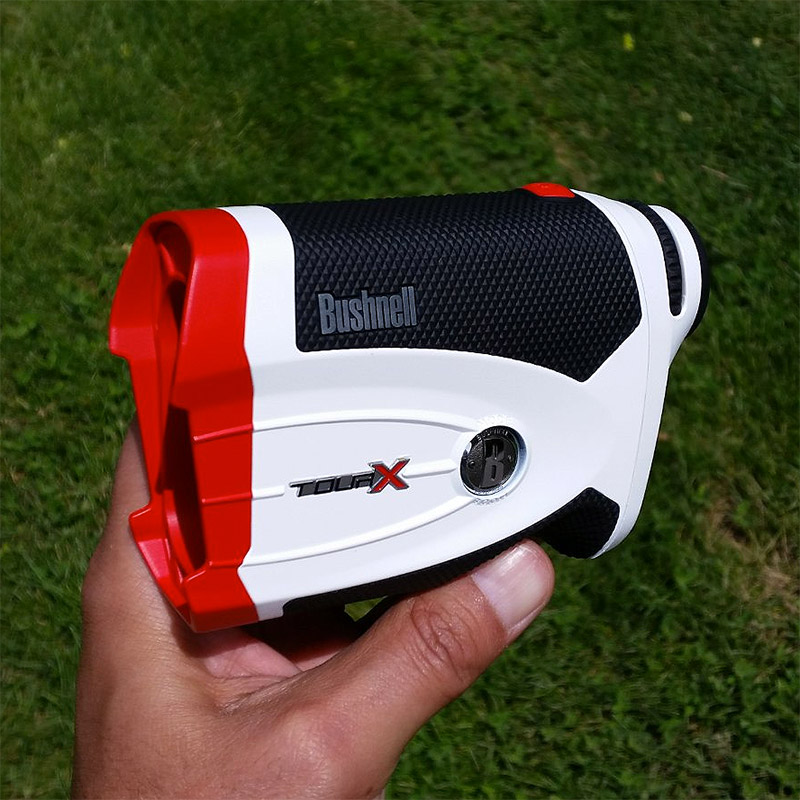 As the flagship laser from Bushnell I would expect nothing less than a fast, dependable, and accurate reading.  That’s exactly what the unit produces.  The reading is probably the fastest of any laser I’ve reviewed to date.  The yardage is spot-on the first time, unlike some less expensive Bushnell units which can sometimes produce a different yardage every time the same yardage is shot.

Accessing the unit is easy in the very nice zippered case which can hang on the golf bag.  An elastic loop

I tried the slope feature for a few holes but ended up switching to the non-slope mode.  I record all of my rounds for my handicap and don’t want any illegally used clubs or accessories affecting my handicap.

Once again, the red plate is the not-for-tournament-play version.  To be legal the black plate must be installed.

The pros to this unit are super-accurate yardages with lightning (maybe I should say “laser”) speed.

The cons are the size of the unit and the cost.  This laser is larger in size than many on the market.  The retail price is an astounding $680 but most street prices are at or below $499.

The Bushnell TourX is a case of “you get what you pay for.”  This is the fastest and most accurate laser rangefinder I’ve tested to date.