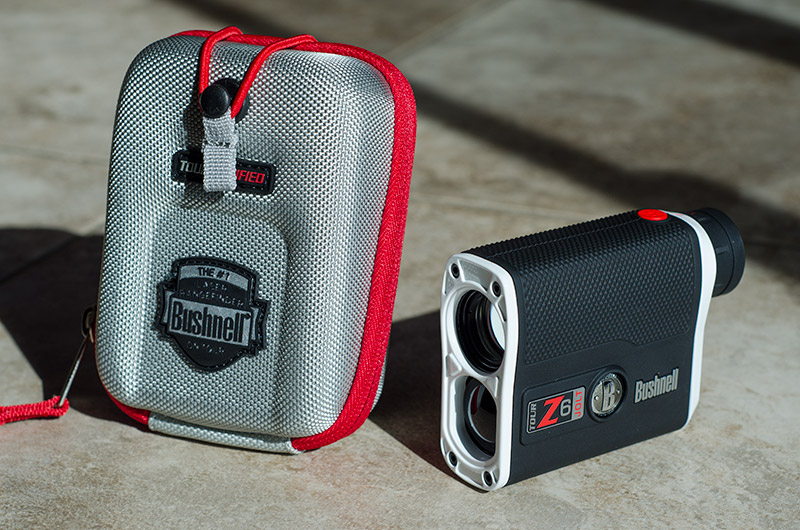 I’ve had a Bushnell Tour Z6 Jolt laser rangefinder in the bag for a while now.  The Tour Z6 Jolt is a small golf laser rangefinder which has some very nice features, the most useful and obvious is providing yardages to the golfer.  Armed with exact yardages to the pin, to the lip of bunkers which need to be carried, to trees, to hazards, the golfer can confidently pick the right club and right swing for the shot.

The key feature of a laser rangefinder is to give the golfer a yardage to the pin.  The “Pinseeker” component of the Bushnell Tour Z6 is designed to easily lock onto flagsticks quickly and accurately, delivering that yardage fast and dependably.

The unit is capable of delivering yardages from five to 1,300 yards.  Nice to be able to get a yardage to the pin on a 1,300 yard hole for you big hitters.

When the unit is fairly sure it has locked in on a flagstick, it vibrates or produces a “jolt” which gives physical feedback to the user.  Thus the “jolt” name.

The numbers, crosshairs, and other on screen display items are shown in a very vibrant glowing red.  That glowing red is much easier to read than lasers with black numbers.

The focus adjustable viewfinder magnifies the viewing area by 6x, making the flag or other items the user is shooting very easy to see.  Since the focus is adjustable, the viewfinder can be tweaked for those who need prescription glasses or contacts.

The case and housing are very sharp looking.  The skeleton of the unit is covered in very tough and durable rubber, which is also waterproof.  Great for those rounds in Scotland, Florida, or the northwest USA.

I like the small footprint of this particular laser.  It easily fits in pockets on the golf bag.  It is not heavy or cumbersome.  The included case hangs nicely on a towel loop or other place on the bag for easy access.

For the most part the yardages are acquired quickly and accurately.   The jolt feature is a nice addition, giving confidence that the unit is locked in on the flagstick and not the trees behind the green.

I wear prescription glasses on the course.  Because of how they are working, I need an adjustable diopter to do a custom focus for my eyes.  That way I don’t have to take off my glasses to see what’s in the laser’s display area.  The adjustment works great and saves me the inconvenience of having to remove my glasses to use the unit.

Above I mentioned that “for the most part” the yardages are quick and accurate.  I have found on occasion that the yardages can sometimes vary by as much as two yards.  One time I may shoot a pin at 150 and the next two confirmation shots could be 151 or 149.  I’m not necessarily good enough to worry about the difference between 149 to 151, but it may bring into question whether or not the yardage is accurate.

I typically prefer lasers over golf GPS units.  The only time a GPS is better is when hitting over trees or objects which block the laser’s line of sight, which is not often.

New drivers can cost $500 and up.  But they can’t help you with as much of your game as knowing exact yardages to the pin and all sorts of other targets on the course.  The roughly $400 investment for this unit is steep, but will be used far more times in a golf round than 14, the typical number of times a driver is hit.

The Bushnell Tour Z6 Jolt is a solid golf laser rangefinder and it is my new gamer.  I love the feel of the unit in both tactile terms and the jolt feature.  The red display is awesome.  I can use it in the rain, which I play plenty of rounds in.