A few rumors have been floating around in the last few hours on social networks that Ben Hogan Golf Equipment Company is out of business and has fired all of their employees.  I just received a “clarification” which is copied and pasted below:

Fort Worth, Texas: The Ben Hogan Golf Equipment Company announced today that it is going through a period of re-tooling and right-sizing in an effort to become more nimble and profitable in the highly competitive golf equipment business.

The Company has voluntarily implemented a reorganization initiative to minimize expenses and streamline the operation. This included the reduction of a large percentage of the exempt and non-exempt workforce, some of whom will be rehired as contract employees. The company has not declared bankruptcy nor been foreclosed upon, and remains in the business of producing and selling the highest quality and most precise golf equipment in the world.

“Reports of our death have been greatly exaggerated”, said Scott White, President and CEO of the Ben Hogan Golf Equipment Company. “While our organization does not look the same today as it did in 2016, we are confident that the changes we are making will make us a stronger and better company in the future”.

I’m playing in a golf group yesterday which included a very quiet and mellow older player.  During his round he was taking the plastic wrap off of his “new” irons, and hitting them very well, for the first time.  We’ve all seen that before, right?  Wrong.

Upon closer inspection I was flabbergasted to discover the “new” irons were a set of Ben Hogan irons he had purchased some 10 or more years prior.  How cool to see these beauties in un-hit condition.

What made him decide yesterday was the day to try these irons?  How crazy that a Hogan player for over a decade, me, was in the group. 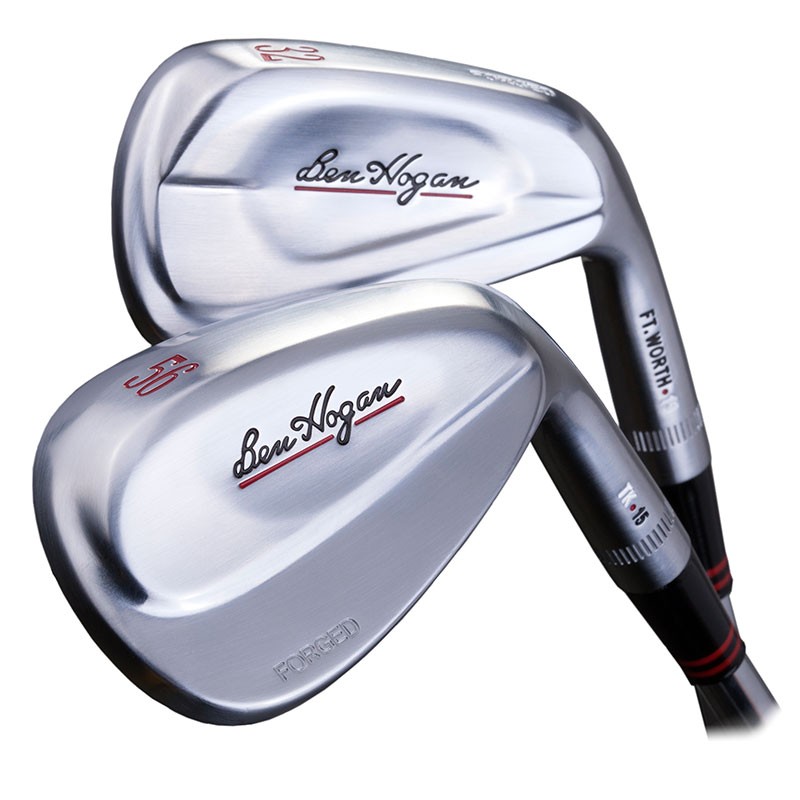 I usually reserve golf press releases for the Hooked On Golf Blog sister site HogWire.biz.  I get so many press releases submitted it is quite stunning.  I decided to build the HOGWire site just as a golf newswire.  That said, I have a special place in my golf heart for Ben Hogan irons.  As many of you probably already know, I’m still gaming a set of 2002 Ben Hogan Apex Edge Pro’s.  I’ve had those in the bag for two club championships, 2nd in the city amateur, and countless $2.00 nassau victories.

This PR below is “special” enough to warrant a mention here.  I’m excited to see the Ben Hogan name back in the game, so to speak.  I have a now 10+ year golf business relationship with Terry Koehler, President and CEO of Ben Hogan golf.  Terry is a pioneer in golf club design.  I’ve reviewed his Eidolon wedges and SCOR wedges in years past. I’ve had at least two of Terry’s club designs in my gamer bag ever since 2006.  No other club or club designer can claim that honor.

With that all said, I’m excited to hear this news about the new Ben Hogan Golf irons and wedges.  I’m hoping, as such a loyalist of the brand, and one who has had such a great relationship with Terry, to be one of the first to review these.  I’m working on that.

These clubs employ a concept I’ve lobbied for a few years now, putting the loft numbers on the clubs rather than an arbitrary number like “8.”  Golf companies have juiced up clubs so much, an 8-iron is no longer an 8-iron.

The last great reason I’m anxious to get my hands on these Hogans?  The model number of the wedges: TK-15.  As in “Tony Korologos – 15.”  Yes, I’m sure that’s why they came up with that naming convention.

Ben Hogan Golf Equipment Company is pleased to announce that we are now taking orders for the new Ft. Worth 15 irons and TK 15 wedges – allowing golfers to once again become a “Hogan Player.”

“Everybody is well aware of the stories of how committed Mr. Hogan was to producing high quality golf equipment,” said Terry Koehler, President/CEO of Ben Hogan Golf Equipment Company. “We continue this commitment today. We also understand that while golfers are extremely excited about new products, buying a set of premium irons and wedges is a large purchase, so we want to assure them that we will stand behind our products to provide them with the best experience possible.”

“The HoganFit™ system was created to give golfers a way to determine their own unique and perfect loft matrix that will optimize their precision and distance control,” added Koehler. “With 44 loft options available, only Ben Hogan Golf Equipment Company will provide the most accurately custom-matched set of irons in golf. It’s the only way to bring precision back to iron and wedge play.”