For decades Bonneville Golf Course here in Salt Lake City, Utah has been the most popular public course in the state and for good reason. It is awesome.  For decades the course has been known for being a “hard and fast” course which calls for the player to accurately calculate approach shots, landing them at just the right place.  Some shots needed to hit short and bounce up in order to stay on the putting surface. 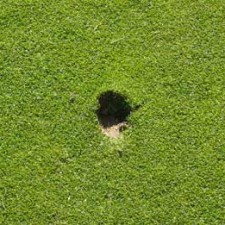 Over this summer the course has switched from manual, hand-watering to a new automated irrigation system.  The change is done and the new sprinklers are working, really well.  The course is as green as ever but it is very, very different.  The greens are no longer the fast and hard greens I’ve grown to love (and hate in a good way on some days).  They’re country club soft.  Shots which once would bounce over the green when hitting the front half are now backing up.  On the 3rd hole, a green which is very hard to stick, I hit a wedge to the middle of the green and spun it back off and down the hill.  On #10 I did the same thing, hitting the middle of the green then spinning entirely off the surface.

Some shots this softness has helped though.  I hit an 8-iron to the par-5 first, a back pin.  My shot flew to the back pin, hitting about a foot short of the flag.  Normally that shot would bounce over the green and leave an impossible downhill chip. Instead, I had a 15″ eagle putt.

The speed of the greens is considerably slower right now.  This could of course be a factor of the blade length of the mowers, or it could be that they’re just slower because they’re more moist.  Those of us who are used to “Bonney” speed and the fine and tough breaks those fast greens produces are now befuddled by putts which come up short and don’t break.

I’m not saying the change is good or bad.  It’s just, “different.”  The strategy has changed.  Rather than hitting shots with the goal of hitting the front or even in front of the green, one must think pin high and go even longer than that.  I’m finding that any club less than an 8-iron requires getting the to-the-pin yardage and aiming 10-15 feet past it.

Welcome to the new Bonneville.