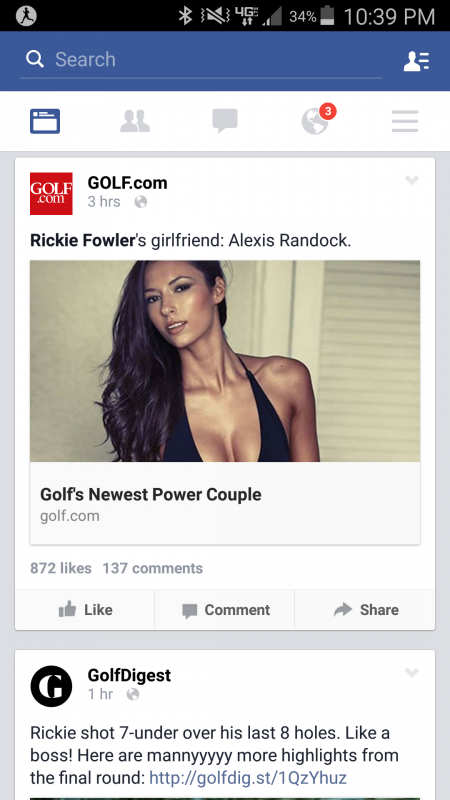 I took a five day weekend to do some great hiking and playing in the red rock country of southern Utah this past weekend. I didn’t have a lot of internet access, but I did have the occasional update. One such update came through on several of my social networks about Rickie Fowler’s dramatic victory at THE PLAYERS (always spell that in ALL CAPS, it’s what they do). Nice playing Rickie.

I got far more updates about Rickie Fowler’s girlfriend Alexis Randock though, many from Golf.com. Golf.com (and several others like Golf Magazine) just can’t resist posting T&A anymore. It’s like clockwork. They barely need any relevant reason to post this garbage, which made me think… Yeah that’s a first.  They barely need any excuse to post T&A click bait, hot wives and girlfriends (WAG), or hottest women in golf.  It’s all crap.

What does it take to trigger a WAG post?  Here are a few of the best excuses Golf.com has for posting T&A:

Thank God for Alexis Randock.  With Paulina Gretzky having had a baby and out of the limelight, and with other hot women in golf or WAGS like Lindsey Vonn and Amanda Dufner leaving the game, Golf.com was in trouble.  Thankfully they have a new set of breasts to suckle up to.

PREVIOUS POST
How Many Sleeves of Balls Did I Knock in the Water at TPC Sawgrass's 17th Island Green?
NEXT POST
Hats Off to Golf Courses Who Warn Customers of Bad Conditions or Aeration!