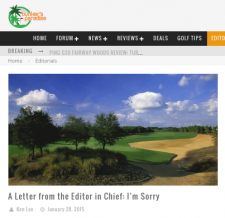 Hats off to the editor of Bunkers Paradise.  After the HOG article yesterday showing several instances of plagiarism, and a backlash by other golf writers on Twitter, an apology for stealing other golf sites’ content has been issued.  It is a step in the right direction for them and as hard as it must have been to admit, they did the right thing.

The offending writer has been let go and the copied content has been removed.  The first excuse I predicted yesterday was the “I didn’t know the writer was stealing content” one.  That’s in this quote below:

Today it was brought to my attention that another industry writer we hired for our news section was also plagiarizing work. I was under the impression and agreement that he would be producing original content, and as soon as I found out, the writer was let go. Whether they did not know the rules or not it is ultimately my responsibility that they do and I apologize for that.

Still, Ken Lee owned up to it as owner/editor and a tip of the hat goes to him for doing that.

This quote is a key in the apology:

Moving forward I can guarantee that this will never happen again.

I hope so Ken.  As I told you on Google plus, duplicate content does not help your site.  It hurts it, especially when the original content is from a much larger and more reputable site in Google’s eyes.