Last year, can’t remember exactly when, I started getting some phone calls from an unfamiliar long distance number.  I was not aware of the first batch or two of calls, as my phone was in silent mode.  In searching my call history, the caller was calling over and over, but never leaving a voicemail. I thought (dreamed) that Blair O’Neal or maybe Sandra Gal was finally stalking me.  Unfortunately that wasn’t it.  Then I started getting emails from someone I wasn’t familiar with, calling me names and saying “you are a coward” and such.  These two people were the same.  It was the editor or owner of Bunkers Paradise, pissed at me.  It turns out he thought I was running the spoof Twitter account @golfblogGRR, which was calling him out on all his grammatical errors.  As much as I would have loved to take credit for such a brilliant idea, I could not. But the BP dude didn’t, and probably still doesn’t believe said spoof account is not me.

Let’s get one thing straight.  I’m no coward.  I have NO problem calling out anyone and having the balls to put my own name on it.  I’ve done it countless times over the DECADE I’ve been doing this.  Quite frankly, I’d never even SEEN this guy’s website.  I don’t visit many other golf sites.  I’m too busy doing my own stuff to bother with them really.

Things have been somewhat quiet and I haven’t been stalked by the guy lately so that’s cool.

Today I was reading some Tweets and found one by a writer I greatly respect, Ryan Ballengee.   Ryan pointed out a case of obvious plagiarism showing a link to the original article and the stolen one.  The original was a European Tour website article, and the copy was on Bunkers Paradise.  See image below. 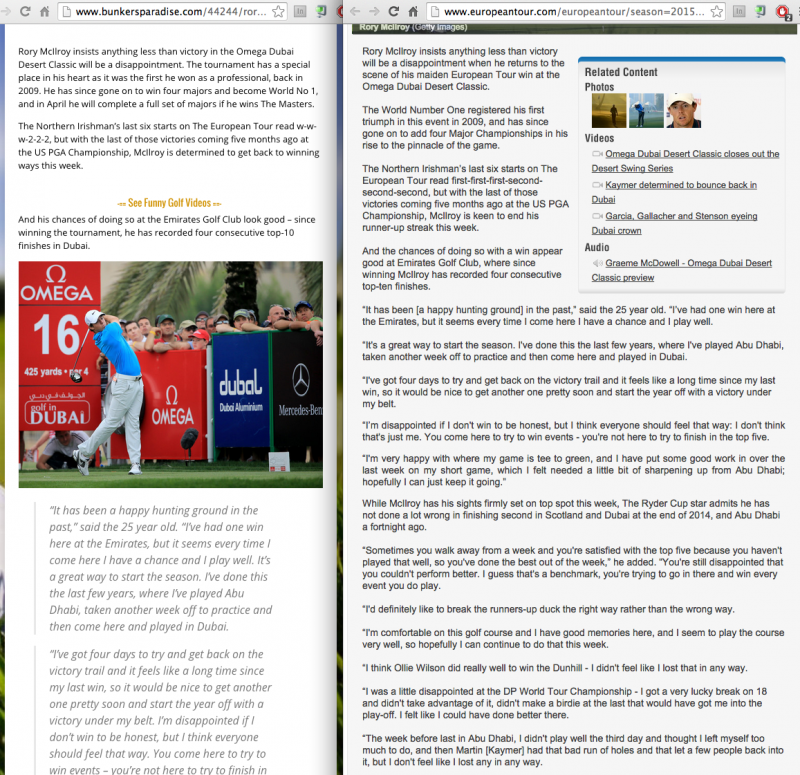 Just change a few words here and there… nobody will notice. Click to expand.

Ryan said he’d talked to BP regarding copying other content, and they’d removed four articles at that time.  It seems they didn’t change their ways.

Ryan’s post today sparked a very engaged discussion on Twitter.  For the heck of it I picked a few other BP articles punched chunks of them into Google.  In just 2-3 minutes I found several duplicate articles copied from the European Tour website, as well as other sites that cover golf.  Sometimes BP changes a word or two in a paragraph here and there to disguise the copying.  A couple of more examples:

Copy on left, original on right….

Original on left, copy on right… In this one they seemed to think they only needed to disguise text in the first paragraph…. shameless.

As a writer/blogger who has had content stolen many times, I feel the need to expose this for what it is.  Plagiarism is such a fancy sounding word.  I prefer the word STEALING.  Sure we all make spelling and grammatical errors.  Some writers are better than others.  But stealing others’ content is shameless and inexcusable.  It is not a mistake.

Oh I can already hear the excuses and reasons.  I’ve heard them before from many other content hijackers:  “I didn’t know so-and-so was writing these articles.”  “My wife wrote them.”  “We had a plugin that auto-blogged” them.

Golf is an honorable game.  Stealing golf content is not in the spirit of the game and is grounds for disqualification.  BP should issue a public apology and either close their doors or make some wholesale changes.  They’ll probably do neither.

I wish I could claim it, but “Plagiarism Paradise” was coined by the mystery spoof Twitter user @golfbloggrr.

One response to “Bunkers Paradise or Plagiarism Paradise?”

No Charges Against Tiger Woods for Car Accident