Staying Warm on the Golf Course – Dunning Base Layer Review

After yesterday’s round I must post this review today. In northern Utah golfing in late November is not common because it is either too cold or the courses are closed due to snow. Since I hadn’t played for 21 days and the wind was down, I decided to brave the cold and play some golf with a good friend. Thanks to my Dunning Layering system, the only cold part of the round was my putting.

The Dunning Base Layer system is made from 100% merino wool, one of the finest wools available. The merino wool in the base layer is fantastic at regulating body temperature, especially in keeping the player warm and insulated in cold conditions.

Dunning offers two options for the top portion of the base layer (the upper body). There is a short sleeve shirt base layer ($89.00) or a long sleeve version ($99.00). Sizes for the top section come in small, medium, large, extra-large and double extra-large. The only color offered is black.

The bottom portion of the base layer comes in the form of boxer briefs, with three styles to choose from. Sizes for the boxer briefs are small, medium, large, extra-large and double extra-large.

On The Course, At The Game, On The Slopes?

I’m normally pretty picky about the temperatures I’ll be willing to golf in. Anything below 55F is usually a no-go with my sketchy back. Yesterday’s temps were sub 50’s and hovering around the 40’s when the round was over. With my base layer system rocking, I was nice and warm and somehow hitting the ball very well to the point of being 20-30 yards longer than normal. The base layer helped keep me warm so I could focus on playing good golf, not on how cold I was.

I’ve worn the base layer system for two of the last home Utah football games here. My seats are in the west stands, which can be very cold when the sun goes behind them. I’ve nearly frozen to death several times at November football games. Not the case this year. The base layer has been a huge help.

Soon the golf courses here will be permanently closed due to snow. At that point I’ll be hanging up the golf clubs and heading up to Utah’s greatest snow on earth for some skiing. I’m looking forward to putting my base layer into play on the slopes. I like to suggest to my friends at Dunning they they make a long-underwear version of the boxer briefs. 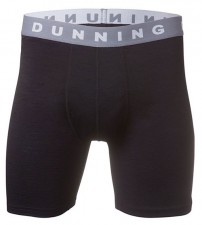 Dunning’s base layer components are not cheap. They could certainly be more expensive than the regular apparel items they would be underneath. That cost is offset immediately by the performance, comfort and especially the warmth the system provides. Thanks to the Dunning layering system, I can enjoy outside activities like golf, football, and soon skiing.

The Base Layer would go great with the Dunning Golf Stretch Thermal ¼-zip pull-over as well as the Dunning Stretch Pique Multi Stripe Polo.

Check out the Hooked On Golf Blog Dunning image gallery.

PREVIOUS POST
Winter Golf Can Be Fun
NEXT POST
Best golf blooper ever? Chi Chi Rodriguez hits himself in the Chi Chi's