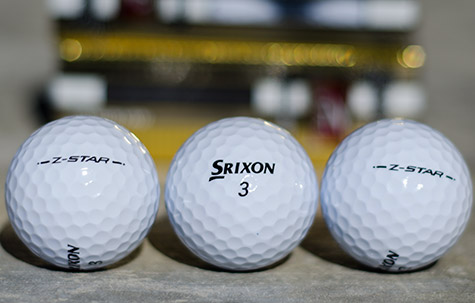 The 2013 Z-Star has some improvements over previous models as well as retaining some of the excellent qualities of previous models. Lets take a look at the 2013 Srixon Z-Star.

The Z-Star is a “tour” level golf ball. “Tour” typically means a higher spin golf ball with a soft urethane cover, the kind preferred by PGA Tour players such as Keegan Bradley.

The Z-Star is a 3-layer ball: outer cover, mid-layer and inner core.

The soft outer cover employs the new Srixon “Spin Skin” technology. This technology gives the ball 20% more grip on the clubface on short game shots and thus a great amount of control. The cover has 344 dimples.

The core or inner-most layer is where the ball gets its power from. The large core employs Srixon’s “energetic gradient growth” technology. In other words, the density of the core varies from center out. That variation, when tuned properly, results in more distance off the driver.

Enough about all the technical mumbo-jumbo. All golf companies have their high technology engineering speak. It makes great marketing. But what’s the performance of the ball on the course? Here are my findings.

The distance achieved with the Z-Star is excellent. The fact that the ball flies so well with very little sidespin, even in windy conditions, makes it go quite far. The minimal sidespin makes the ball very accurate off the driver.

Mid-distance shots like mid-irons are great with the Z-Star. I’ve stuck many greens with what my friends and I call “tour sauce.” Tour sauce happens when you back up shots as they hit the green, or zip-check short game shots. The control and spin this ball has with irons is as good as any ball I’ve played.

Short game shots are a joy with the Z-Star. I’m able to get that two-bounce and stop kind of spin from pitches and chips. Full wedges and short irons can result in some very large amounts of backspin. So much that depending on green conditions, I may need to aim 10 feet past the pin and suck it back. It is quite fun to suck shots back, when you are in fact past the pin. It isn’t cool when you underclub and suck one back off the front of the green into a bunker though. 🙂

In windy conditions the ball performs brilliantly. I tested the Z-Star side-by-side with another golf ball in windy conditions this past weekend. On each drive my playing partners and I could easily see that the Z-Star flew straighter and was affected by the wind less than the other ball. I’d could hit both balls without telling my buddies which was which, and they were able to tell me which one was the Z-Star based on its flight. In those conditions the Z-Star was also an average of 5-10 yards longer.

The Spin Skin technology is quite remarkable. Most high spin and soft cover balls are not very durable. After 18 holes, 36 holes and more, I can’t see a scratch on the Z-Star even though I play with square grooved wedges. In fact, starting up my last round I dug in the bag for a new Z-Star and grabbed two. One ball was new and the other had been played for 27 holes. I could not tell them apart.

The 2013 Z-Star is a fantastic golf ball. The ball features great feel and distance on long shots and unmatched control in the short game. The durability is better than just about any tour level ball I’ve ever tested.

Tour of the Cleveland/Srixon headquarters in California