Welcome to the third and final segment of the Hooked On Golf Blog Year in Review for 2012.  In this piece I’m highlighting a few blog posts from each of the final three months of 2012 as I’ve done in the HOG YIR 1 and HOG YIR 2.  You can click the heading of the month to see that month’s archives, or the links within each summary.

The biggest news of the YEAR for me was the birth of my son Seve Anthony.  Yes, his name was inspired by Seve Ballesteros.  Little Seve has been nothing but a joy.  SO thankful.

A shark fell from the sky onto a golf course, and it wasn’t Greg Norman.

HOG ran a Facebook contest which awarded some cool shirts to the winners.

Oh yeah, I commented on the USA Ryder Cup team’s meltdown at Medinah. 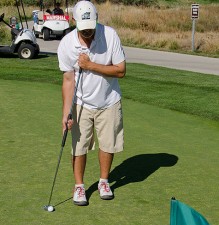 Heated debates raged over changes being made to the Old Course at St. Andrews.  Too late.  The changes were already happening.

On a sad note, I lost a golf buddy who I’d played 100’s of rounds of golf with.  RIP Dave Shields.

I was featured, with weak short game, on PGA.com’s Free Lesson Friday.

The long awaited Hooked On Golf Blog Golf Turkey of the Year Awards posted on 12/3.

Miguel Angel Jimenez, the wine drinking-cigar smoking golfer from the European Tour, broke a leg skiing.  Fortunately the cigar made it unscathed.

I reviewed one of the sweetest wedges in the universe, the New Wedge Series by Miura Golf.  Then I interviewed Miura’s President Adam Barr.

No big surprise, Rory McIlory was named PGA Tour Player of the Year.

The last and final Q-School EVER, graduated to the PGA Tour.