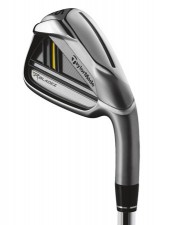 Golf gear head alert! TaylorMade has been hyping a new product which will “change the iron forever.”  Preliminary statements say that there will be more distance than ever.  Today’s big announcement isn’t just the iPad Mini, but the new RocketBladez irons.  These irons have a “speed pocket” in the 3-7 irons, a small slit in the bottom of the club head.  Pricing is from $799-899 for 4-iron through PW and AW.

Here’s the info from TaylorMade on the irons:

The Speed Pocket has changed the iron forever.

More importantly lets take a look at the specs (loft, lie, shaft length) of these clubs.  That’s where the majority of the distance is coming from.  These are long shafts and very strong irons as far as the loft goes.

As a reference to where modern irons compare to irons of the past, here’s a typical loft, lie, length of irons from the 1990’s courtesy of wiki answers.  As you can see, most modern irons are longer and stronger.