Has Your GPS Guided Your Car Into A Sand Trap?

Ah it has been a while since I’ve posted something in the fairly new “Boneheads” category here.  Here’s a good one: 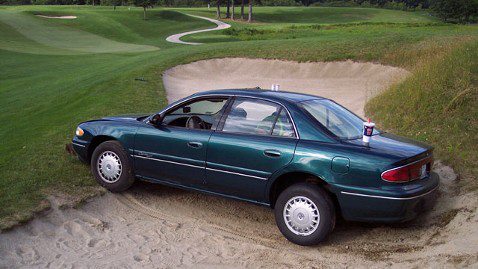 I’ve read a few accounts over the last day or so of this lady who ran her car into a sand trap at Whitinsville Golf Club in Northbridge Massachusetts.  I finally found a picture of the car in the trap through a HOG Facebook friend.

Apparently a drunk lady was following the directions of her GPS a little too literally.  The unit told her to turn left, so she immediately turned left and drove through a corn field and onto the golf course.  Then her car dropped several feet and became stuck in a sand trap.

Obviously this lady was not using one of the new golf GPS devices which shows hazards and gives aerial views of the golf holes.

The driver admitted to drinking half a liter of vodka and will be charged with drunk driving, driving with a suspended license, negligent driving and driving with an open container of alcohol in the vehicle.

She will also be assessed a two stroke penalty for grounding her car in a hazard.