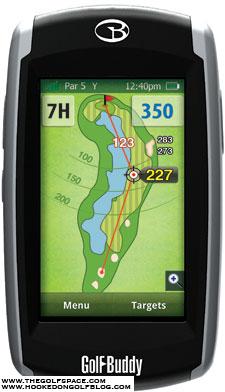 I’m going to continue with the GPS theme this week and post my review of the GolfBuddy World Platinum GPS.  The Platinum is full featured GPS with numerous cool features.

Yardages yardages yardages!  The unit shows a display of the golf hole you are on, and can give yardages to front, middle back of green as well as yardages to any place on the hole.  You can simply use the touch screen to highlight a target and yardages are calculated.

This unit has a touch screen interface.  I’m so used to using an iPhone and an iPad though, that I find myself pinching and dragging my fingers like it is one of those units.  It doesn’t quite work the same, but the interface works well.

The unit displays various looks of each hole’s layout.  The main look is an overview of the hole which shows crucial driving distance yardages to help you know what club to hit off the tee.  You can then change to green view to see a zoomed in shot of the putting surface for fine tuning targets and yardages.

Speaking of targets, the unit automatically shows many yardages to targets like bunkers and lakes.  If that information isn’t enough, you can customize your own targets.

The Golf Buddy Platinum GPS scores 40,000 courses.  I’m not sure that is enough for me.  When I get to the 40,001st course I’ll let you know what happens.  The course are preloaded in the unit.  It will however “update” the courses via the included software as needed when you hook it to your computer.

No annual or download fees is a great feature.  I’m not a big fan of having to subscribe or pay monthly or annual fees for units like this.  I’d prefer to pay one price up front and avoid the hassle.

The unit will automatically detect which course you are playing.  Unlike other golf GPS units I’ve tested, this feature actually works on this unit!  Turn it on and it finds my course as soon as it is booted.

If all the above features aren’t enough, this unit will track the scores of your entire foursome.

In addition to score tracking, the unit will track stats a statistical analysis of your game.  Stats included: greens in regulation, putts per round, fairways hit, sand saves and more.

Using this unit is like having a detailed caddy’s notebook for 40,000 courses. The Platinum works very well and the yardages are quite accurate when checking them with my laser rangefinder.  Some of my local courses could use a bit more detail in the course layout for my taste however.

The display is easily visible, even in the bright sunlight of the Nevada desert.  The interface is easy to use and navigate quickly during a round.

The score tracking works well as do the stats.

The GolfBuddy World Platinum retails for $399 but I’ve seen online pricing for this golf GPS as low as about $300.

Included in the box, which is nicely packaged by the way, are the GPS unit, USB cable, CD-Rom with instructions/software, holster/belt clip, power adapter and rechargeable battery.

The GolfBuddy World Platinum really has a ton of cool features.  The yardages are solid, and the layouts combine with them to build confidence in shot selection.  Managing your way around a golf course is so much easier with all of this data.

Course knowledge is very important and having a Platinum in the bag on a new track is very valuable.  Instant course knowledge.  The unit will certainly help prevent those surprise shots which enter hazards you weren’t aware were there, like the little lake on #15 which you can’t see from the fairway!