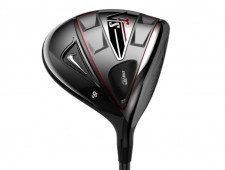 With one week to go until Father’s Day I figured this would be a great time to post my Nike VR_S Driver review.  I’ve been doing my on-the-course research for this piece for quite a while.  I’ve had this driver in my gamer bag almost all season.

The $359.00 (retail) VR_S Driver is a 460cc driver with an adjustable hosel.  The driver’s “NexCOR” face technology helps produce more “speed” and as a result more distance.  I’ll discuss the features in detail below.

As I covered in my Nike VR_S Hybrid review, NexCOR is a variable face thickness technology.  Unlike one would think, the face is thicker in the middle and thinner around the edges.

NexCOR technology increases distance and accuracy for all shots, especially those not quite in the center for those of us (like me) who aren’t pros.

The hosel of the driver incorporates Nike Golf’s STR8-FIT technology.  This system allows the user to custom fit their driver to their exact swing.  I did just that myself.  Surprisingly one of the settings is perfect for a “granny over-the-top dual chicken wing face open inside-out reverse pivot body lunge” swing.

Stock shaft for the VR_S Driver is the Nike Fubuki K.  Available flexes are X, S, R and A.  Mine is the S flex.  Weight of these shafts varies based on stiffness from 53.5 grams to 59 grams.  Shaft length is 45.75 inches.

Stock grip on the VR_S Driver is the Nike Tour Velvet.  I’m not a big fan of this grip.  It is harder than the grips I typically like to use.  That being said, I have great traction with it and it is very durable.

The head cover which comes with the VR_S is cool.  There’s a magnetic section on the end of the cover which clamps it around the shaft.  The cover is good looking and does its job, protecting the club.

The setups I’ve experimented with on the VR_S Driver have been interesting to say the least.  I started with this driver in a completely neutral setting on all accounts, loft, lie and face angle.  I hit it quite well.  Then I started messing around with the STR8-FIT adjustments to see if I could improve my accuracy, launch angle and especially distance.  What happened next became legendary among my golf buddies.

I set the club up for a draw and for a flat lie, as I’m not the tallest guy in the world.  I was surprised that I had to adjust ball position and my swing so much but I made the adjustments and started to hit it “okay.”  I decided to tweak the settings more, adding more draw to the bias.  My contact got worse and control very bad.

I struggled for several rounds with the driver but kept with it and adjusted my swing.  I managed to shoot some decent scores and still beat my opponents out of the ever-important $2.00 nassau bets.

I sat down with the STR8-FIT quick start guide one more time to see if I could find a better setting, one that I didn’t have to adjust to but was instead adjusted to my swing.  Something didn’t look right.  Bonehead alert!  It was at that point that I realized I’d been setting my VR_S according to the guide for LEFT handed players.  I couldn’t believe it.  I flipped over the guide and sure enough, there was the right handed setting guide.  As they say in texting or on Twitter: OMFG.

Armed with the incredible new knowledge gained from the right handed section of the quick start guide, I set the club to one degree flat and one degree of draw bias.  Since then I’ve been extremely accurate and long, without having to think much at all.  I just swing it.  In fact I played a new course in Georgia (Woodmont) while in the area to see the Masters.  I hit the first 13 of 14 fairways.  The only reason I missed the 14th was because I’d just realized on the last hole I’d hit every fairway to that point.  My gag reflex kicked in and I missed, barely.

Now that my VR_S is set up for MY swing, I can do just about anything I want with this driver (except hit it as far as Tiger Woods).  I can easily fade or draw the ball and most of the time I hit my normal straight ball with very little side spin.

I know Nike really likes to focus on distance and speed because that is the exciting stuff.  That’s great, but accuracy is a big deal.  Golf is very enjoyable when you hit a lot of fairways.  I’ve been enjoying the game much more since putting the VR_S in my bag.