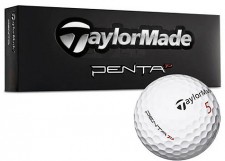 Golf Ball Week 2011 is heating up.  Today and tomorrow I’m covering my picks for the two best “tour” golf balls and two best “amateur” golf balls.  This post today is a review of one of my two best 2011 picks for tour performance golf balls, the TaylorMade Penta TP.

Earlier this year I spent some time in the local TaylorMade Performance Lab (review coming soon).  The tech handed me a box of Pentas at the conclusion of the lab, and raved about the performance of the ball.  I thought, “yeah, and if he sold Yugos, they would be the best car in the world.”  But after I threw the first Penta onto the tee and played a round with it, I was a believer.

I think I’m the world’s only Greek Golf Web Geek.  So naturally I knew that the ball would be a five layer ball since it is called a Penta, which in Greek means “five.”  Most high performance balls have three layers and some four, but five?  Cool.  What do they do?

I could go into great detail covering what each layer is made out of, citing odd proprietary polymers and materials, but mostly that stuff is gibberish.  Let’s just mention quickly what each of the five layers does.

Layer 1 – Cover: Soft feel on putting and short wedges. This layer is made of Urethane, a typical cover material for high performance golf balls.

Layer 5 – Core: The inner most layer is primarily what provides distance, carry and low spin when driving the ball.

Okay so the ball has a lot of layers.  But who cares if it has 498 layers if they don’t produce great performance?  How does the thing work on the course, when I HAVE to get up and down from 41 yards to tie my opponent and save myself a $2.00 bet?  That’s the biggie.

I’ll start with driver performance.  This ball feels fantastic off the driver and goes LONG.  When talking to a TaylorMade buddy of mine, he told me that this ball and all its layers can compress properly for any swing speed, from the senior amateur to PGA Tour.   Not really sure about that, as I haven’t seen anything regarding that in TM’s ads or web site.  But it sounds good.

I’m able to work the driver very well naturally, as the ball does have spin, unlike distance balls which are meant to reduce spin.

Hitting iron shots with the Penta TP is also fantastic.  I can feel the ball compress on the club face and have a great sense of control.  Any shot I’m capable of executing can be performed well with this ball, from carving shots to controlling trajectory.  When the ball hits the green, it stops quickly.

Short game is perhaps the best part of this ball’s performance curve.  Chipping and pitching shots with some nice check spin is a joy.  I’m just a lowly amateur, but it is fun to hit those quick two hop and stop shots which stop on a dime and leave seven cents change.

Putting is solid with the Penta TP.  The ball rolls true, and I have a great feel for distance control.

My only critique with this ball is its durability.  With some crisp wedge shots and short to mid irons, I can shave the cover pretty quickly.  It isn’t uncommon for me, a guy with a pretty slow swing speed, to need to replace the ball before 18 holes is done.  I DO realize though, that part of that soft feel and great short game performance is as a result of having such a soft cover.

The TaylorMade Penta TP is one of my top two tour performance golf ball picks for 2011.  This is a fantastic ball.