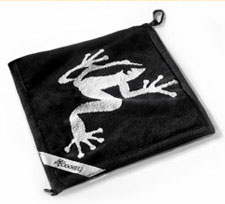 I’m throwing in the towel this week.  By that I mean that I’m going to bust out a couple of golf towel reviews I’ve been needing to take care of.

First on the list is the Frogger Golf Amphibian Tour Towel. I’ve reviewed a Frogger Amphibian Towel in the past as well as the Amphibian Ball Towel.  This unit, however, is the “Tour” model.  The word “tour” attached to a piece of golf gear usually means that it would be something a pro tour player would use.  In the case of a golf bag, a “tour bag” would be a very large bag like you see on the PGA Tour.  Like the tour golf bag analogy, the Amphibian Tour Towel is a larger and more substantial towel.

The Amphibian towel is a pita pocket shaped towel with an inside and outside layer system which has two functions.  The inside of the towel is a wet side and the outside is the dry side.  Between the fabric is a water resistant barrier which keeps the wet side wet and the dry side dry.   The wet side is 3x as absorbent as a regular towel to hold more water.

The wet/dry concept is awesome.  I used to wet half a towel, using the wet side to clean the clubs and the dry side to dry them off.  But the wetness creeps to the dry side, the path of least resistance.  So eventually I’d just have one towel which was damp, not dry or wet.  With my Tour towel, I have a very wet inside to get the clubs clean, and a dry outside to dry the clubs or simply wipe the sweat off my face (or the mustard from the hot dog I inhaled at the turn).

In rain, the towel can serve as a rain cover!

During rain storms reversing the wet/dry concept is a very cool idea.  The outside becomes the wet side and the inside is a protected dry towel.

Also I’ve found that with the size of this towel, that I can actually use the towel as a rain cover.  See pic to right.  I put the pita pocket over my clubs and it covers them all, with a dry layer despite the fact that the outside of the towel is wet.

The Tour model is double the size of the original Amphibian towel, at 20×20 inches.  This isn’t small.  Most players would benefit just fine from the smaller version.  If you carry your bag and have the inside nice and wet, you can add quite a bit of weight to the load.  The towel can also get in the way of carrying a stand bag, either when setting it down or picking it up as it can tangle in the bag’s legs.   I usually put it high up and covering the top of the bag where it won’t have issues with the legs.

This is a great golf towel which can be much more to a golfer than just a standard towel.  Performance and craftsmanship are as I’d expect from Frogger, top notch.

Due to its size the Amphibian Tour towel may be for more serious golf addicts, like me.