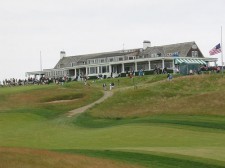 The United States Golf Association (USGA) announced this morning that the venue for the 2018 U.S. Open will be Shinnecock Hills. Shinnecock has hosted the U.S. Open four previous times, the last being 2004 when Retief Goosen won. That was quite a performance and back then Goosen was like golf’s version of The Terminator.  Another great memory from a Shinnecock Open will always be Corey Pavin’s 4-wood shot which sealed his victory in 1995.

“We are thrilled that our national championship will return to one of our country’s most-storied venues. We are confident that Shinnecock Hills will provide a true challenge for the world’s premier players, as it has for more than a century.” ~USGA President Jim Hyler

One response to “2018 U.S. Open goes to Shinnecock Hills”