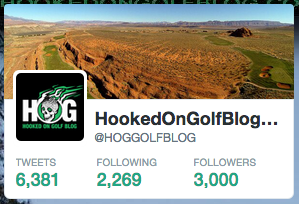 Promptly after announcing that on Twitter, some joker unfollowed and put it back to 2,999.  That’s my kind of humor for sure.

Give my personal Twitter a follow as well. That one is up over 4,200 followers:
Tweets by @TheGolfSpace

A few days ago I did a “first look” post for Cork Tree, a company that makes some cool cork putter grips.  I do these first look posts to help get the word out about the products I receive, very quickly after I receive them.  I often take quite a long time on my reviews, since I take them seriously unlike other fly-by sites.  So the reviews can take a while.  The first look gives my readers a teaser to spark some interest, and gives the company that sent in the product some web juice while I’m doing my more lengthy review process.

As usual, I distribute links to the posts on all the social networks I have, including Twitter.  I was thrilled to see that my retweeted first look tweet (yes sounds ridiculous) had some 1,400 favorites and 1,400 retweets.

Those numbers blew away my previous best, which were maybe just 100 or 200.  I thought it was a little funky that this tweet had so much action though.  The tweet is from Cork Tree’s twitter, and they only have 227 followers as of today’s date.  How could a Twitter account with 227 followers generate such interaction?

Out of curiosity I looked at a few of their other tweets and noticed a very interesting pattern.  Many tweets would have no action, or perhaps 3-4 retweets or favorites. Then there would be a tweet with 1.4K favorites and 1.4K retweets.  Hmmm.  A little fishy.  The numbers of retweets/favorites on these “popular” tweets is almost always 1,384, or 3-4 tweets above that.  This smells as fishy as Ian Poulter’s five balls in the water last week. 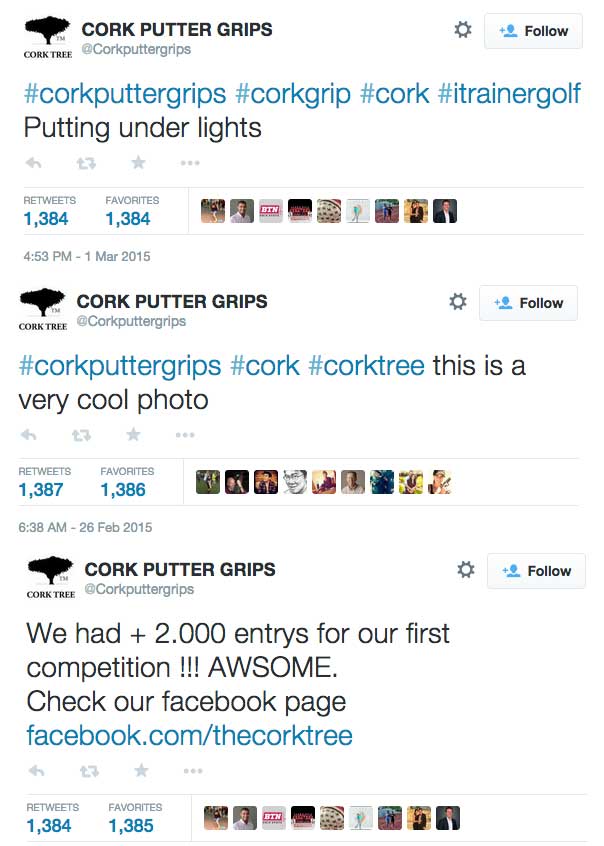 I’m not going to say that Cork Tree is engaging in some kind of social networking fraud.  I don’t care. Maybe some bot or some hacker who is trying to help them is behind this.

Either way, I’ll be reviewing the Cork grip soon.  Can’t wait to see how many retweets that one gets.

I have a pal who I listen to and value his advice greatly.  He’s my best friend.  If he told me to jump off a cliff, I’d ask which one.  If he told me to switch from ProV1’s to Top Flites I’d ask if he wanted me to play the XL’s or the Gamers.  Once he told me to start a blog back in 2004.  2500+ posts and tens of thousands of man hours later, here my blog sits.  I guess I do have him to thank for a tripping over golf gadgets every morning when I walk through my kitchen to make a cup o’ joe.

I’m not a Twitter fan.  I think Twitter is gay heterosexually challenged.  I don’t think it is a coincidence that the first four letters of “Twitter” are “TWIT.”   Those little birds and the little frilly, girly designs make me want to throw up in my mouth.  To me Twitter seems like the Britney Spears of the web, hot one day and old trash the next.  It really seems like 97% of the people on there are just trying to generate traffic to their own web sites.  It all seems like a collection of 140 character spams.  If it isn’t spam, it is what somebody ate for lunch, or the fact that some lady’s kids farts smell like roast beef.  If I had severe ADD I’d probably love it.

That being said I’ll give it a shot

My pal is smart (I trained him well) so I’m taking his suggestions and implementing them.  I’ll probably have a couple of Twitter accounts, one for my golf web sites and one for personal so I can filter what I want.