Today the golf world lost perhaps the most famous and well known golf course architect in history, Pete Dye.  Pete Dye is famous for his, shall we say, “creative” architectural ideas like the island green 17th hole at TPC Sawgrass (photo below of me teeing off about to lose 3 balls and shoot a 9), or his “volcano bunkers” at the Dye Course at French Lick Resort (other photo below of me standing atop a volcano bunker).  Most famously Dye loved to use railroad ties to border terrain features and create more intimidation for the player.  It worked.

Dye has produced many proteges who in their own right are very successful course architects. 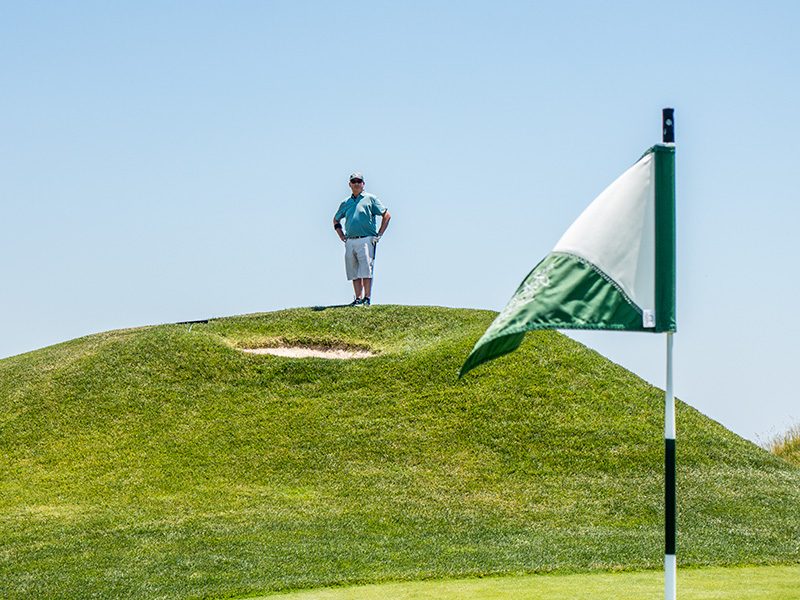 I’ve had the pleasure (and pain) of playing a few Dye designs including TPC Sawgrass Stadium Course, French Lick Resort’s Dye Course, and my favorite: Teeth of the Dog in the Dominican Republic (photo below).  There’s even a Dye course here in northern Utah, about 30 minutes east.  That one has a hole that’s 805 yards. Driver mid-iron… Right. 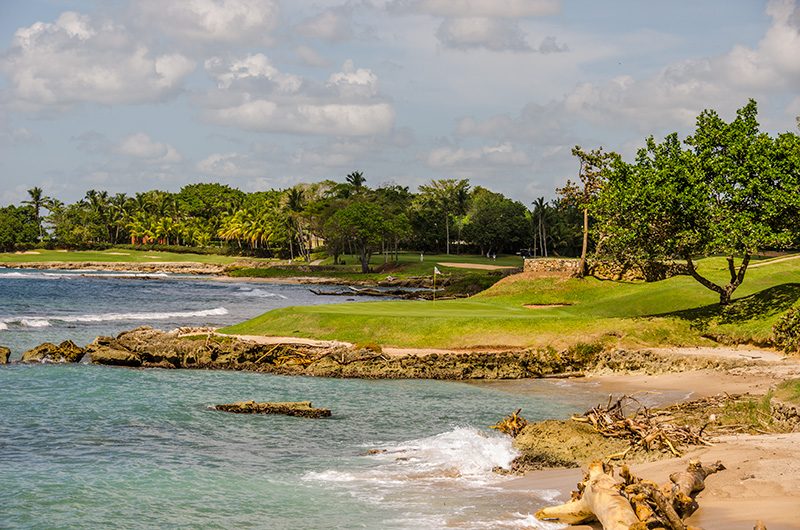 It’s surely a sad day for the golf world, but the good news is these memorable courses will live on, and continue to remind us about how unique, creative, and innovative Pete Dye was.

Sad to say I never had the opportunity to meet the man. Wish I had.

#10: Bloggers and social media accounts change their avatar to a photo of the par-3 17th “island green” at TPC Sawgrass

#9: Endless video/audio replays will show Hal Sutton hitting a 6-iron to the finishing hole and uttering the famous TPC statement “be the right club today.” It was the right club. Sutton beat Tiger Woods that day in 2000.

#8: Whenever the term “THE PLAYERS Championship” is written, “The Players” is written in ALL CAPS. That’s what they do.

#7: Video loops of the Fred Couples “par” on the par-3 17th, when he holed out from the tee after dunking his first shot in the water.

#6: Endless video replays of the long putt Tiger Woods drained on the par-3 17th en route to his victory. The putt was “better than most.”

#5: Endless video and commentary about how 482 million golf balls find a watery grave on the par-3 17th every year.

#2: “Dye-abolical” is a common buzzword by announcers who are describing the course design of architect Pete Dye.

#1: Endless “5th Major Championship” discussion, along with nauseatingly repetitive polls, forum discussions, and social media posts as to whether or not THE PLAYERS (remember the ALL CAPS) should be the a 5th major. No it shouldn’t. Let’s not go all “LPGA Tour” on this.

How Many Sleeves of Balls Did I Knock in the Water at TPC Sawgrass’s 17th Island Green?

While everyone is enjoying this week’s THE PLAYERS (always spell THE PLAYERS in ALL CAPS, it is what they do) Championship, I thought perhaps I’d share a quick link to my experience playing TPC Sawgrass.  The highlight of the round was making birdie on the tough 14th.  The lowlight was… well, the par-3 17th island green, which kicked my ass.

Why do my arms feel like rubber at this moment?

THE PLAYERS Championship TV Schedule & Comments – Always Write THE PLAYERS in ALL CAPS!

Ah it is one of the better weeks of the year in professional golf. Yes it is the week of THE PLAYERS Championship. Always write “THE PLAYERS” in ALL CAPS. That’s what they do.

This is fun week of watching pros dump their tee shots in the drink on #17. It is a fun week of the nauseatingly repetitive and ever-old discussion point, “should THE PLAYERS (always write that in all caps, that’s what they do), be the fifth major?” Speaking of nauseatingly repetitive, there is always the “better than most” highlight, and of course the ever debated, “which hole is the best par-3 in golf, #12 at Augusta National or #17 at TPC Sawgrass Stadium?”

Should THE PLAYERS (remember to write that in all caps, that’s what they do) be considered the 5th major? No. It should not. Let’s not go “all LPGA” here okay? No need to water down the majors.

Final thoughts on THE PLAYERS

K.J. Choi notched the biggest victory of his career, and the biggest paycheck by far at I believe around $1.7 million. I’ve been a K.J. fan ever since I watched his great performance in the 2004 Masters, with the eagle on #11. Loved that.  Choi is a swing machine with possibly the most precisely repeated swing on tour.

Many congratulations to Choi on the great performance.

It was tough to watch David Toms miss that short par putt on the first playoff hole from about 3.5 feet.  Especially tough after he made the amazing birdie on the final hole of regulation from a sand filled divot in the fairway to force the playoff.  After the miss he went up to knock in his bogey putt, then paused, then remarked, then knocked it in.  He was shaken.  He turned pale and he had a sick look on his face.  He knew he’d likely given up about a million bucks in prize money and his first victory in years.  Toms appeared to be wiping away tears.  Felt bad for the guy.  On the positive side though, he was there in the hunt for the first time in a long while.

I thought it was funny that Toms is a Cleveland player, but when they cut to his family his son was wearing a Titleist hat.

Graeme McDowell has had a rough year with a ton of missed cuts.  It seemed like he finally figured out whatever the issue was in his game with his first three rounds in the 60’s.   But a final round 79 dashed his hopes and raised questions once again about the state of his game.

Tiger Woods made it through nine holes before he withdrew due to recurring injuries in his left leg.  I was surprised that he even played in this tournament since the story the previous couple of weeks was that his foot was in a boot and the fact that he doesn’t typically play the TPC Sawgrass course terribly well.  It seems like every time Tiger tees it up this year it gets worse and the possibility of him breaking Jack Nicklaus’ major record becomes less and less likely.

The TPC turned out to be as it was expected, a great stage and a ball striker’s track. Strikers like Choi, David Toms, Luke Donald and Nick Watney hung around the top of the leaderboard all week.