Once you’ve been to the Masters Tournament, even the practice rounds, you have memories for a lifetime. Here’s one that I vividly remember.

A couple of years ago I was at a Masters practice round and had the opportunity to follow around a very interesting grouping, Rory McIlory and Tom Watson. It was fun to watch the interaction between the two. Watson was helping McIlory out with tips on the golf course, and likely on life. He’s just that way.

Since it was a practice round, the players would often hit a few shots or several putts from one location. Most players know most of the pin placements so on their approaches they might hit a couple of shots to where they imagine the pins will be. On the greens they’ll putt to those same imaginary places, like lower right on the par-5 2nd (can you say Louis Oosthuizen?).

On the par-4 9th I got a fantastic vantage point to watch Tom and Rory approach the green. See the picture in this post of Rory. For those who have not been to Augusta in person, you have no idea how much elevation change there is. The 9th green is incredibly slanted from back to front. So much so, I think I’d fall down if I tried to walk down it. Watch the players during the tournament hit their approaches. The second they hit it they might get mad because they know they put it in the wrong place and the slope of the green will cause the ball to go to a very bad position.

One such bad position would be a shot which goes long. Chipping from the back of the 9th green would be a nightmare. I’d bet wads of cash that an amateur golfer could not chip a ball onto the 9th from above the green, and keep his chip on the green. It’s THAT steep.

During their practice round McIlroy walked right up in front of me and dropped about 8-10 golf balls off the back of the green. I watched in absolute amazement as he clipped those balls so crisply that they would land on the back fringe and actually check, before slowly moving to a tightly dispersed spacing. Imagine chipping from a downslope onto a downslope on greens that are probably running a 14+ on the stimpmeter. I could have sat there with 50 balls and never hit one that perfectly. I’d probably be hitting gap wedge back up to the surface for my next shot.

When Rory moved to another place to practice some chips or putts, Tom grabbed his caddie and pointed him to the back of the 9th green, right where Rory had been hitting those little crisp chips. He threw down about 8-10 balls. Tom Watson is one of the best around the greens in the history of the game. He wanted to see if he could replicate what Rory had been doing.

I watched Tom hit ball after ball. Some ended up in the middle of the green and some off the front and down the hill. The dispersion was massive. None of the balls ended up at the top of the green like Rory’s. Tom looked at the green, the balls, Rory… he then shrugged his shoulders and moved on.

The courses have been closed for months here in northern Utah. I’ve enjoyed the break from golf, mainly the break from my short game. So during the winter layoff while working in my office I’m watching Tom Watson’s Lessons of a Lifetime II, a multi-DVD golf instructional program with over 3.5 hours of instruction. Who better to teach me chipping and pitching than one of the best ever?

Watching some short game lessons during the big snowstorm

Every aspect of the golf game is covered by Mr. Watson, from full swing to short game to putting. There are even lessons targeted specifically to kids, and seniors. Here are most of the topics:

What I like about Tom’s style is how clearly and easily he describes the situations, the objectives, and how to execute the shots.  I’ve been trying to absorb as much as I can from Tom, especially that pesky short game. 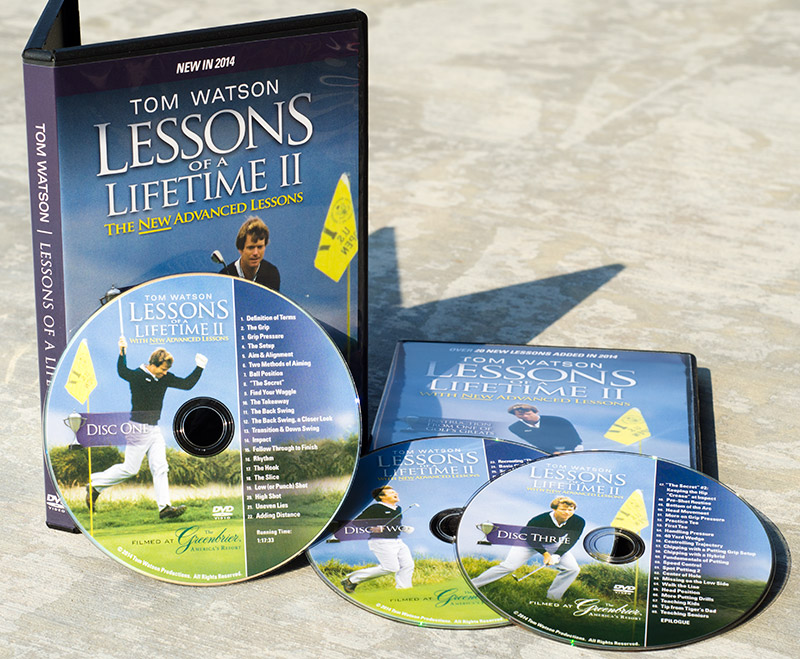 Most Valuable Lessons For Me

I’ve found there are several things I’m not doing in my short game which Tom says are crucial:  Find the bottom of the arc and put the ball slightly behind it.  Set up square to the target, then open up the body, but close the left hip/side.  Pick a landing spot, and see how long the roll is with varying clubs while still hitting the same landing spot.

I’ve watched Tom’s tips for handling pressure a few times now.  Since I only compete in high pressure situations a few times per year, I seem to get pretty jumpy and nervous.  I find it hard to slow my heart rate down and calm down.  When the snow melts and I’m in one of those first pressure situations this next season, I’m looking forward to employing Tom’s advice.

This multi-DVD set is full of great golf lessons and I should be better at playing it more often to help my own game.  It’s nice to pick a point of focus, like short game, putting, bunker play and try to absorb the concepts.

For a price less than a single golf lesson, this DVD set from Tom Watson has hundreds of great golf teachings which can be viewed over and over again.  What a value.

Oh man if only Tom Watson could have parred the 72nd hole at the British Open. That would have been one of the biggest moments in sports history. Still, that was one of the most awesome performances I’ve seen, and the most fun I’ve had watching golf all year.