Lately there are small golf ball companies popping up which compete directly with the big boys. One great example is THE BALL.

THE BALL is a new golf ball which can be found at www.ineedtheball.com. This golf ball stands toe-to-toe with any premium golf ball on the market with regards to distance and short game control.

THE BALL is a three piece (three layer) golf ball. Each layer features materials and properties which contribute to the ball’s performance.

The outer layer is known as the cover. The cover of THE BALL is made from cast urethane, the same material found on the cover of 90% of the premium golf balls on the market. The cover is responsible for the spin of the ball and the control it has in the short game.

There are 318 dimples on the cover of the ball. The dimples promote lift and help the ball carry farther and straighter.

Driver spin is 2745 revolutions per minute (RPM), lower than the leading brand (they say “leading brand.” I’d guess they mean the Titleist ProV1), which his 3022.  Lower driver spin is good.

Carry + Rollout for THE BALL is 277 compared to 272 for the leading brand.

Specs and techie stuff aside, how is this ball on the course, where performance really counts? I’ve played every premium ball known to man and this ball has no weaknesses compared to any of them. In fact, it outshines many premium brands for my game in the distance department.

Two weeks ago (before it snowed) I played a couple of rounds in some very cold and wet conditions. We’re talking low 40’s and even upper 30’s toward the end of the round. In these cold conditions golf balls go much shorter as the ball does not compress easily. That was not the case for me and THE BALL. In fact, I was pleasantly amazed that I was out-driving my regular distances by 20 to even 40 yards!

Case in point was the 468 yard 2nd hole at my home course, the toughest hole on the course. Normally my drives end up around the 200 yard marker, give or take 10 yards. My yearly average approach is about 275. With a nice solid drive I found THE BALL way up the fairway at the 160 mark. Ding ding ding! Winner. Much more fun to hit 8-iron into a green than a 4-iron. 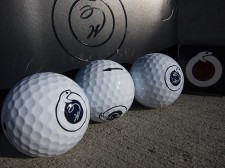 300+ yard drive in the cold? I couldn’t believe it. But by the time the round was done, I believed it. Same case on the 15th hole, the hardest hole on the back. Normally once again I’m looking at a 5-6 iron approach on this tough hole. Instead, I was at the 150 marker debating a 9 or 8-iron.

Distance isn’t the only strong point of THE BALL. I found the feel to be fantastic around the greens, even for my very mediocre short game. I had nice control on short shots inside 100 yards and especially chipping and pitching. THE BALL feels great off the putter too, easy to control distance.

THE BALL is golf’s equivalent to a car that costs as much as a Honda, but outperforms a Porsche.