Time to resurrect the HOG bonehead of the week award.  This one goes to whoever made the name labels for the caddie bibs at the Cadillac Championship. 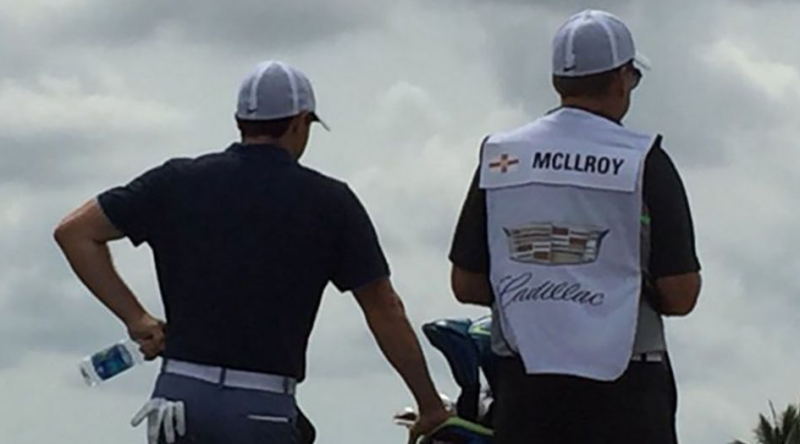 Who is this McLLroy guy? Never heard of him.

ORLANDO, Fla. (Feb. 2, 2016) – NBC Sports Group will feature more than 25 hours of live programming from on-site TPC Scottsdale surrounding the Waste Management Phoenix Open, including tournament coverage on Golf Channel and NBC, and Golf Central originating from an embedded set location within the raucous par-3 16th hole “coliseum.” Veteran on-course reporter and one of golf’s most animated personalities – David Feherty – is set to make his NBC Sports Group live tournament debut as lead analyst during Thursday-Friday first and second round coverage on Golf Channel. World No. 1 Lydia Ko is set to make her first start of 2016 on the LGPA Tour at the Coates Golf Championship, airing Wednesday-Saturday on Golf Channel. Alison Lee and Suzann Pettersen are paired together for the first two rounds, which will be the first time the two will compete alongside one another since their controversial match at the 2015 Solheim Cup. World No. 3 Rory McIlroy will look to defend his title at the Omega Dubai Desert Classic, an event he has won twice in his career. And the PGA TOUR Champions returns with the Allianz Championship in Boca Raton, Fla.

Feherty debut: David Feherty, joining NBC Sports Group exclusively in 2016 following a nearly 20-year career with CBS as an on-course reporter, will make his live tournament debut this week. Feherty will join Rich Lerner in the 18th tower as lead analyst for Golf Channel’s first and second round coverage Thursday-Friday, and he’ll transition to his familiar on-course reporter role during Saturday-Sunday afternoon coverage on NBC.

Golf Central on-site from raucous par-3 16th hole: Golf Central, the network’s signature evening news program, will originate from on-site, embedded within TPC Scottsdale’s 16th hole spectator “coliseum.” The show, which will feature live news and analysis leading in and out of live tournament coverage, will be hosted by Kelly Tilghman, and feature Brandel Chamblee and Arron Oberholser as analysts, with George Savaricas providing reports and player interviews.

Largest crowds on PGA TOUR: The event attracts the largest galleries on the PGA TOUR, with a record 564,000 in attendance throughout the week in 2015, including nearly 160,000 during Saturday’s third round alone.

Pettersen & Lee paired together for first time since controversial Solheim Cup match: Alison Lee and Suzann Pettersen – the two players at the center of last fall’s controversial moment in the 2015 Solheim Cup – will be paired together for the first two rounds this week. Wednesday’s opening round 12:25 p.m. ET tee time will feature Lee and Pettersen playing alongside Stacy Lewis.

Broadcast Notes:
Schwab Cup Championship at Stake for Montgomerie, Maggert and Langer: Three players will tee it up with an opportunity to claim the season-long Charles Schwab Cup with a victory this week in Colin Montgomerie, Jeff Maggert and Bernhard Langer. The scenarios in which each can mathematically win the Schwab Cup are:
Montgomerie – Can finish 30th and win if Maggert finishes 18th or worse, and Langer finishes 14th or worse.

Broadcast Notes:
Format: The four NCAA Division I Men’s and Women’s Golf Championships semifinalist teams will reconvene to compete in the inaugural East Lake Cup collegiate match play championship from East Lake Golf Club in Atlanta, Ga., home of the TOUR Championship by Coca-Cola. The event will benefit the East Lake Foundation. In addition to live tournament coverage on Golf Channel, the network will provide pre-and-post event news coverage on Golf Central, with live reports and interviews from on-site at Eat Lake.
Participating Universities: The four participating men’s teams include: reigning National Champions Louisiana State University (LSU), the University of Southern California (USC), who lost to LSU in the championship match; the University of Illinois, who has won three of their last four fall collegiate events and is currently the top-ranked team in the country according to the GCAA Coaches Rankings, and the University of Georgia (UGA), two-time national champions (1999 and 2005). The women’s division features three of the top-four ranked teams in the current Golfweek/Sagarin Rankings including 2015 NCAA Women’s National Champion Stanford University. The remaining field includes Championship runner-up Baylor University; the University of Southern California (USC), currently the top-ranked team in the country in both the Golfweek/Sagarin Rankings and Golfstat Relative Ranking; and six-time national champions Duke University.

Broadcast Notes:
2015-16 season kicks off: This week marks the first of 47 official events during the 2015-16 PGA TOUR season, with seven of those events being played in 2015.
Napa, Calif., resident Johnny Miller to contribute to Golf Channel’s event coverage: Napa resident and Golf Channel on NBC analyst Johnny Miller will make multiple appearances during Golf Channel’s telecasts of the Frys.com Open this week. Miller was instrumental in finding a new home for the event after previously being contested at CordeValle in San Martin, Calif.

Frys.com Pro-Am airing Wednesday at 9 p.m. ET: On Wednesday at 9 p.m. ET, Golf Channel will air the Frys.com Pro-Am, as players make their final preparations ahead of Thursday’s opening round. U.S. Presidents Cup participant Chris Kirk will be mic’d up during the Pro-Am and provide viewers with insight during his round. NBA star (Golden State Warriors) Stephen Curry has committed to compete in the Pro-Am.

Jordan Spieth: Player of the Year airing Wednesday at 10 p.m. ET: Immediately following the Frys.com Pro-Am show, Golf Channel will present a 30-minute special looking back on the memorable 2014-15 season of World No. 1, Jordan Spieth. The show will feature an exclusive interview with Spieth, conducted by Golf Channel’s Rich Lerner and Gary Williams. A roundtable discussion with Lerner, Williams, Damon Hack and Tim Rosaforte also will examine Spieth’s memorable season in the context of golf history.
PGA TOUR Season in Review airing on NBC, Sunday at 12:30 p.m. ET: Viewers will have an opportunity to recount the memorable 2014-2015 PGA TOUR season, with PGA TOUR 2015: Season in Review presented by Astellas airing Sunday, Oct. 18 at 12:30 p.m. ET on NBC. The special will examine the moments, biggest events and breakout stars from the past season on TOUR.

Broadcast Notes:
Charles Schwab Cup race continues with two events remaining prior to season-culminating event: With only two events remaining prior to the Champions Tour’s season-ending Charles Schwab Cup Championship, the race continues for the $1 million bonus prize. Colin Montgomerie regained the top place in the current standings with a T-5 finish at the SAS Championship. Jeff Maggert (39 points behind), Bernhard Langer (336 points behind) each have an opportunity to supplant Montgomerie with strong showings in the final stretch of the season. Montgomerie’s slim lead over Maggert is the second-closest race for the Charles Schwab Cup this late in the season since the Schwab Cup began in 2001 (Fred Funk led Jay Haas by 28 points with three events remaining in 2008).
Allen defends: Michael Allen defeated Marco Dawson by two strokes for his seventh career Champions Tour win.
Headlining the field: Colin Montgomerie, Jeff Maggert, Bernhard Langer, Fred Couples, Marco Dawson, Kenny Perry, Tom Lehman, Mark O’Meara, Kirk Triplett and Lee Janzen.

Broadcast Notes:
Format: Golf Channel will showcase back-to-back nights of primetime coverage of the 2015 World Long Drive Championship, featuring the round of 16 being narrowed down to eight competitors (Tuesday, Oct. 20), and the remaining eight dueling for the first place prize and $250,000 purse (Wednesday, Oct. 21). Golf Channel’s expanded coverage of the Championship also will include news and results of the qualifying rounds, Oct. 14-19, leading up to live coverage on Oct. 20-21. New to 2015, competitors will have 2 minutes, 45 seconds to hit their drives in each round, and the player who is trailing in the match will have an opportunity to hit one final ball past their opponent’s to try and advance to the next round in the bracket.