FORE please. Will anyone catch Jordan Spieth?  Below is the viewing schedule for today’s Saturday Masters Tournament:

Yesterday at the Valero Texas Open Phil Mickelson broke his 8-iron hitting out of a fairway bunker on the 12th hole. Video is below.

Silly rules question: If Phil Mickelson’s ball ends up back in the bunker along with the club head which broke off, is that a penalty for grounding his club in a hazard on the next shot? Or is the shaft now “the club?”

(In the voice of Tom Hanks) Wiiilllson!!!

The Wilson 8802 putter has been at the center of numerous major championships and great victories on many professional tours.  The 8802 design has been seen in use by the likes of Arnold Palmer, Ben Crenshaw, Greg Norman, and Phil Mickelson.  The Wilson 8802 is one of the all-time greats.  It has stood the test of time and today is still a great putting choice.  Let’s take a look at the Wilson 8802 putter.

The 8802 is a heel-shafted blade putter.  In english, the shaft is attached to the end of a thin putter head.  This is perhaps one of the most popular designs in the history of putters.   There’s a reason it is so popular, it works.

The head is milled from 304 stainless steel, a fairly soft metal.  The softness produces great feel and feedback for the player, and helps the player control distance.

To perform well on modern greens and modern green speeds, the head weighs in at 335 grams.

The face of the 8802 features some precise milling patterns which are designed to produce a true and straight roll. See photo below:

Standing over this putter the player is not distracted by busy and complex designs, nutty shapes, or fancy graphic art.  The look is as clean as clean could be.

The slightly matted silver finish is easy on the eyes and does not produce annoying glare which more shiny putters can produce on sunny days.

The soft 304 metal helps the putter produce a nice feel, which gives the player great feedback.  Off-center putts still roll well and true, but the putter’s feedback will let the player know the shot was not on the center of the face.  Center-face putts are butter.

I’m normally a heel-toe weighted, center-shafted or center-axis-shafted putter player.  So I figured the balance and weighting of this blade putter would be problematic for me.  Not the case.  Somehow, despite being a heel-shafted blade, the balance of the putter is fantastic.  I never had an issue with keeping the face square at impact.

The face milling helps roll the ball pure and right on line.  There were never any surprises with regards to the roll or the line.

In its simplicity, there’s no alignment line on the top of the putter to indicate the sweet spot and line up the ball.  There’s an element of doubt when I line up as I’m not 100% sure I’m lined up on the right spot.

The putter is only available in 35″ versions, right handed.  Sorry lefties or short people!  I’m not tall and I have long arms, so 34″ putters or even shorter is good for me.  Because the 8802 is 35 inches I have to choke down quite a bit to perform my natural stroke. 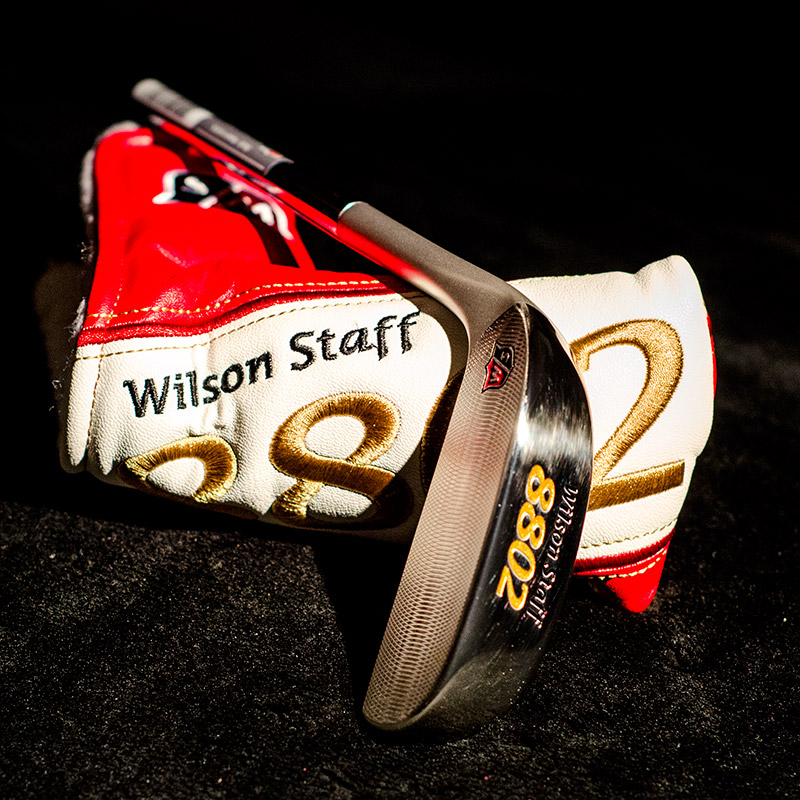 One of my pet peeves is head covers.  At least 18 times per golf round the player will interact with the putter cover.  The last thing I want is a crappy cover which does not protect the most important stick in my bag.  Even worse is when that cover is hard to use.

The included head cover for the Wilson Golf 8802 Putter is very sharp looking and does its job well.  The putter is well padded and protected from dings.  The soft metal in the putter makes it even more susceptible to such dings and dents from other clubs in the bag.

The cover seals via Velcro, which I’m not a big fan of. Velcro wears out over time. A better solution would be a magnetic seal. Even better would be a design which uses no magnets or Velcro.

The reasonably priced $179 Wilson Staff 8802 Putter is the most expensive putter in Wilson Golf’s lineup and for good reason.  It is a fantastic putter with great feel and performance.  The 8802 design is a proven winner through decades of victories by some of the world’s greatest putters.

I have now watched TV for a third time this year, during the PGA Championship. The first two times were the Masters and the Open Championship. I live a sheltered, golf blogger life I suppose.

I’ve considered the PGA Championship to be the red-headed stepchild of the major tournaments, but the finish this year was more exciting than the other three majors. All that despite a hoaky golf course in Valhalla which seemed to strictly dictate playing strategy on many holes, leaving no room for creativity by the players.

Hop aboard the Rory McIlory bandwagon with me! I’m a fan! The McIlroy era has begun. Watch the golf media go all ape gaga over Rory now as Tiger fades. They’ll latch onto him like a baby monkey latches onto its mother. Soon we will be reading all the “will Rory break Jack’s major record?” drivel from the scribes. Quote me on it. Book it. So predictable.

The 2014 PGA Championship was a great major win for Rory because he found himself behind by two shots midway through the round. He found a way to come back and win by two shots. A different win than his previous front-running style wins.

Hard not to like this kid. He is still a kid, but growing up fast. There’s something authentic about Rory. He’s not a mercenary robot like Tiger Woods was. He has a human quality to him and an open, perhaps slightly naive quality to him. This makes him much more likable than Tiger ever was. Time will tell if the endless stupid media questions and taking what he says out of context will sour that likable human aspect. I hope not.

I’ve poked fun at Rickie Fowler for quite some time now. For a few years now, this kid has been more well known for his apparel style than his golf game. That has changed as has my opinion. In EVERY major this year Fowler has been right there, even had a chance to win. I respect that. He’ll get one.

Phil has had a very lackluster season so far. I was pleased to see Phil bring it this past weekend and he produced some great drama, even tying for the lead for a bit. Ironically it was his short game failing him on the 16th hole Sunday, which led to a bogey which put him one back of McIlory.

Henrik Stenson had a share of the lead for a bit. When he three putted I ducked, and I’m 2,000 miles from Valhalla. Stenson is a ticking time bomb and I wonder what he destroyed after yesterday’s round. Still, he’s an amazing player. Just ask his accountant.

I like Lee Westwood. He had the lead after the first round. But I’m not sure he can get over the hump and win a major championship. Maybe he hung around too much with Colin Montgomerie?

I missed much of this. Apparently Bubba Watson had some not-so worthy f-bombs which fell in earshot of not only the TV microphones, but small children. His behavior was enough to warrant many articles and commentary, and an apology on Twitter.

DJ took a leave of absence before the PGA to work out personal issues. Many rumors and articles cited a suspension for drug use but the PGA Tour denied DJ was suspended. Sounds like a self-imposed suspension.

You are a reflection of who you hang out with. ‘Nuff said.

Last but not least Tiger Woods. After withdrawing from the WGC Bridgestone the previous week and almost crawling to his courtesy car, Tiger was back at the PGA and was there to “win.” He did not win. He did not make the cut after shooting consecutive rounds of 74.

Many pundits are theorizing that he came back from back surgery too soon. Tiger insisted he was 100% healthy. Sounds to me like he’s floating down the river of de-Nile.

I’m not sure what to make of Tiger these days. Part of me thinks he should retire now, or at least take the rest of 2014 off and get healthy.

The PGA Championship marks a little bit of a sad day. It is symbolic of the golf season winding down. Summer is more than half over and soon here in northern Utah the snow will be flying and the golf clubs will be shelved for months.

I’ve been thinking of quitting golf lately, but if I’m going to I’d like to do it on my own terms, when I’m pissed off at it!
Right now I’m suffering from a bad case of golfer’s elbow. That injury may bench me before the snow flies.