The Phil Mickelson whiff is something to behold. #Masters pic.twitter.com/6pYUj08b0A

Henrik Stenson holes out on #7 from the front bunker.

Rory McIlory nearly jars his shot on the par-3 4th.

Patrick Reed plays #15 very aggressively and chips in for eagle:

BREAKING: Phil Mickelson to Use THREE Drivers at 2018 Masters Tournament

You heard it first from Hooked on Golf Blog. Everyone thought Phil Mickelson was crazy when he put two drivers into play at the 2006 Masters. One driver was draw biased for left-to-right holes, and was fade biased for right-to-left holes (remember he’s left handed). 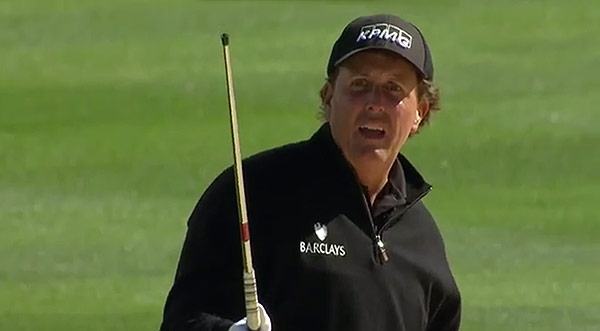 Connections close to Hooked on Golf Blog have told me, under condition of anonymity, that Phil will be gaming three drivers at the 2018 Masters Tournament.  The first two are fade and draw biased like before.  The third driver is “straight biased.” It goes straight.  This will be good for some of the more straight holes like the 7th, 15th and 17th holes.

Phil will be removing his gap wedge to make room for the third driver.