Every major championship I wait for all the golf blogs and golf media to regurgitate the latest golf “apparel scripting” which is bulk emailed to them by golf PR firms and golf apparel companies.  Such a win/win for all involved.  The bloggers/writers don’t have to spend time actually writing content, and the PR gets their message out!  And it is such valuable information!

I wasn’t going to get up a 2 a.m. and watch the Open Championship, but as soon as I saw Jonas Blixt’s scripting I couldn’t sleep.  I HAD to watch it. Then after the first round, I went to the golf store and bought every piece of Blixt’s scripting for all four rounds.  Unfortunately he missed the cut.  So sad for those dead Saturday and Sunday scripts.  I threw the two weekend outfits in the trash.  I never even got to wear them. 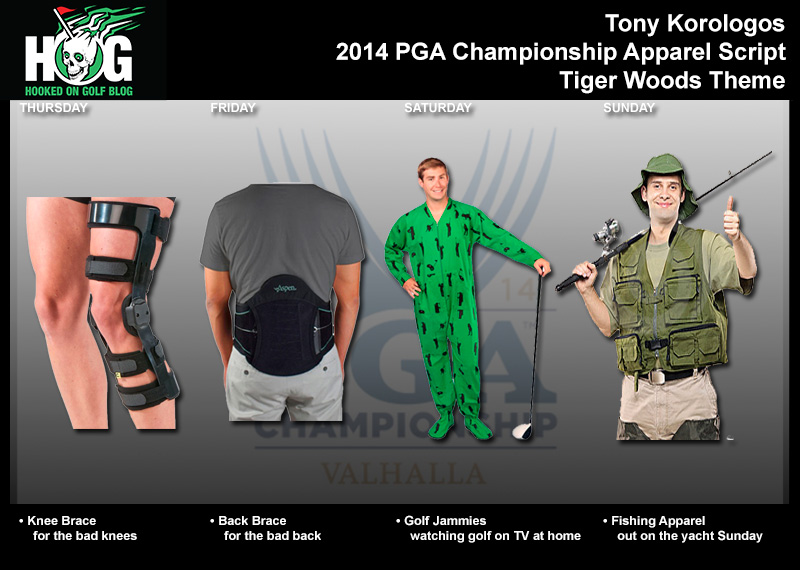 In the spirit of “glory’s last shot” in the 2014 PGA Championship, I’ve spent a ton of time and effort crafting my own apparel script (above).  This script takes on the Tiger Woods daily theme for the week.

Are you interpreting that I think Tiger will miss the cut this week?  I sure hope not.  The whole golf industry is dependent on Tiger and it costs jobs and billions of dollars in the economy when Tiger misses the cut.  We need him.  In fact, if he misses the cut I think I’ll cancel my weekend tee times.

Let me know your thoughts…

The PGA Championship was exciting, despite the 68 hole wait and the endless low testosterone ads

For quite a while fans, media and even tour players were complaining about this year’s PGA Championship.  The complaints were about the course, the endless low testosterone ads (read below) and the leader board’s lack of star power.  It took a while, but the PGA Championship FINALLY had the feel and excitement of a major championship on the back nine Sunday, despite the relative unknowns atop the leader board and completely insane number of commercials on the CBS broadcast.

I’ve been a Keegan Bradley fan ever since I followed him around at the HP Byron Nelson Championship a few months ago for his first win.  That win was in a playoff as was his win this week at the PGA Championship.  Being in close proximity to Keegan on the course and in interviews at the Byron, I definitely felt a confident and energetic vibe.  The guy has a very positive energy which you can feel as soon as he walks into the room.

“I just kept telling myself, don’t let that hole define this whole tournament.” ~Keegan Bradley on his triple bogey in the final nine, 15th hole

What amazed me most was the poise and fearlessness Bradley displayed, especially on the 18th hole during regulation and in the playoff against Jason Dufner.  Those approach shots of roughly 185 and 195 yards will trigger the gag reflex of just about any player who is trying to win his first major.  The shot he hit into the first playoff hole, after Dufner nearly holed his approach for eagle, was a fantastic answer to the challenge laid down by his only remaining opponent.

“It feels unbelievable.  It seems like a dream and I’m afraid I’m going to wake up here in the next five minutes and it’s not going to be real.” ~Keegan Bradley on the PGA Championship win

Rookie of the year is a lock for Bradley.  For that matter, with two wins including a major title, Bradley is definitely a candidate for player of the year on the PGA Tour.

I was amazed by Jason Dufner’s performance and really thought he’d win the tournament because he was so calm and in control.  But his swings and putts really started showing his nerves in the final few holes.  Unfortunately he gave up a five shot lead which he held late in the round.  The final tough holes of AAC made the difference.

It was truly amazing to hear the confidence Tiger Woods had in interviews at the beginning of the week, only to watch him flame out and finish missing the cut at TEN over par.  Tiger’s game is really a train wreck right now.  Based on the fact that he says he’s 100% healthy, that must mean it is all in Tiger’s head.  What he’s trying to do with his new swing, or other things on his mind are like kryptonite to golf’s former superman.  Will Tiger ever get back that mental edge he once had? Not any time soon it seems.  Listening to and reading comments from Tiger fans and haters is quite entertaining.  Amazing how polarizing Tiger has become with fans.

Phil Mickelson lurked in striking range for the whole tournament, yet never struck.

World #1 Luke Donald was lurking, but found a watery grave on the par-3 15th and made bogey on the 18th.  He finished tied with world #2 Lee Westwood for 8th place.

Many top players didn’t even make the cut, including my pick to win Jason Day. Other big names who watched the PGA from their couches over the weekend surprisingly included Graeme McDowell, Martin Kaymer, Vijay Singh, Retief Goosen and Stewart Cink.

TNT produced an awful intro to their coverage which was basically a Tiger Woods love fest.  Gag.

Many fans complained that CBS‘s coverage was too commercial heavy and I completely agree.  In fact, print/web media members calculated a ratio of three commercials per every five golf shots shown.  Some theorize they’re making up for the lack of ads they can show in the Masters.  Within that CBS ad lineup were about a million too many erectile dysfunction or low testosterone ads.  I’m getting really sick of those ads in golf broadcasts.  I guess they’ve done the demographic research and 99% of golf viewers on TV are men who can’t get it up.  I’m happy that I’m in the 1%… for now.  Some fans had a neat drinking game idea.  Take a drink every time CBS aired a commercial.  You’d be drunk faster than at any fraternity party.

Even John Daly chimed in on the ads via twitter:

“some great golf today but I don’t need anymore of these CBS ads every 2 mins–erectile dysfunction & those pesky frequent flyer programs!” ~John Daly

I don’t know when or if Atlanta Athletic Club will get another major, but if it never gets another one that would be fine with me.

It is sad that the last major has come and gone.  The golf season is now far past the half way point.  Yes the FedEx Cup playoffs are coming and that will be somewhat interesting.  Personally, I’ll be counting down the days until April, 2012 and the next Masters.