I’ve always tried to support smaller golf companies and golf entrepreneurs, provided that I believe in their product and the way they operate their businesses.  One such smaller company who is taking on the big players in the golf ball world is Monsta Golf.  Monsta is one of several small and relatively unknown makers of premium golf balls whose product competes with the ProV1’s of the world, and even beats them.  Let us take a look at the Monsta Golf ball. 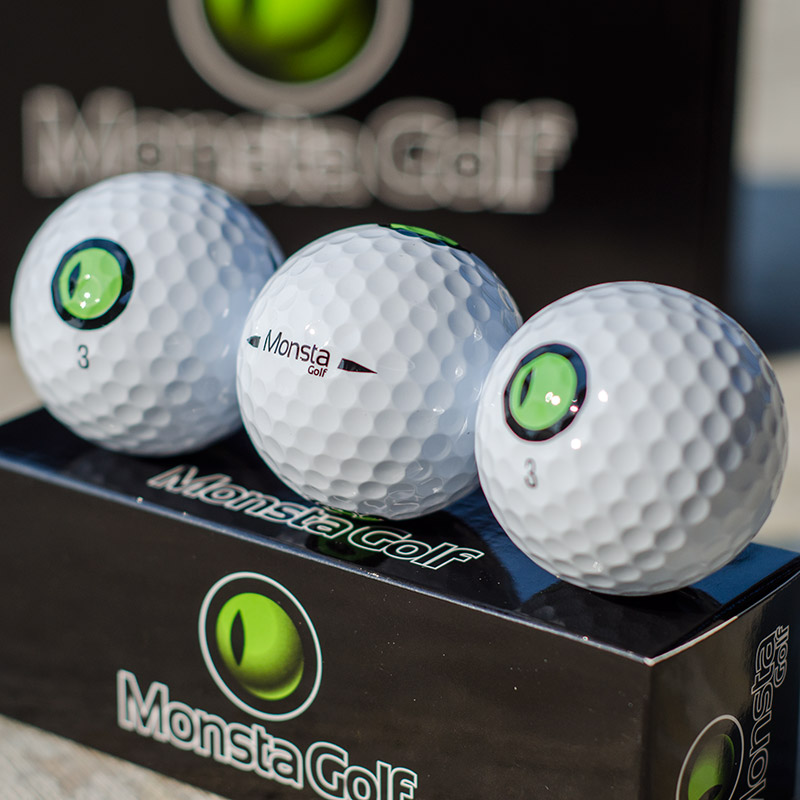 The Monsta Golf ball is a premium “tour” quality ball which has similar performance and materials to the Titleist ProV1 and other high end golf balls.  The ball is a 3-layer ball consisting of a urethane cover, mantle layer, and inner layer.

The 318 dimple urethane cover is soft and produces the performance and spin around the greens one expects in a high quality golf ball. Urethane is the same material found on the cover of most high performance golf balls like the ProV1, Bridgestone B330 series, and many others.

The middle layer, also known as the “mantle,” promotes high initial velocity and produces less spin off the tee. Less spin off the tee means more accuracy and distance. This layer must balance well with the urethane cover which is designed to produce spin on shorter shots.

The core is the innermost layer. This layer transfers the most compression energy from impact to rebound, resulting in the largest distance component of the ball.

I’ve had the Monsta ball in play for many many rounds. The durability of the ball is very good, allowing me to log as many as 4-5 rounds with one ball, provided I don’t lose it. I do have one ball which I’ve used for a good 4-5 rounds, and it barely has any signs of wear.

I’ve found the distance with this ball to be as long or longer than any other ball I’ve played. Recently I’ve picked up some clubhead speed and thus more yardage, and the Monsta definitely shines in the distance department.

Off the driver I notice an interesting flight characteristics with this 318 dimple ball. I may have a shot look as if it is going to just miss the fairway on one side, but it seems to “correct” in the air and straighten out. I can create different launches by changing the tee height as well. For instance, I can get the ball to climb late in the flight by teeing it lower, or I can get a high initial launch and a flatter flight toward the end by teeing the ball higher.

The spin characteristics of this ball are fantastic. Even on very hard greens the ball stops quickly on short to mid irons. In the full wedge game it is not uncommon to put some Phil “Mickelspin” on the ball and watch it back up. The key is to fly it far enough so the ball lands past the pin and spins back. Another term my pals use for this is “tour sauce.”

The first full round I played the Monsta was a few weeks ago. It was a crazy round in which I carded TWO eagles and four birdies, but also had some “others” which led to a 74. The next round was a solid 72 (even), followed by rounds of 73, 74, 73. There’s no doubt this ball works well for my game.

Monsta’s pricing is at $34.99 per dozen. That’s a great deal for a ball with such great performance and durability characteristics. At about $15 cheaper than a box of ProV1’s, it is a no-brainer in my book. But for the average golfer who has not heard of Monsta, the $34.99 price point I think is still too high. I think they’d fly off the shelves at under $30. $24.99 would be even better. My guess is though that their hard costs will not warrant that low of a price point. After all, there are only a few plants in the world which make golf balls, owned by the bigs like Titleist, Bridgestone, Callaway etc. Monsta’s are likely made in one of those plants.

The only critique I have is very minor. I’d like to see this ball come in a seamless version. The seam is quite visible. At the least I’d like to line up the ball’s decoration with the seam as I like to putt seamed golf balls with the seam lined up on the target line.

If you normally are willing to spend $40-60 on a dozen “tour” quality golf balls, pick up some Monsta Golf balls for $34.99 and you’ll have an extra $15 in your pocket you can spend on some frosty beverages at the 19th hole. Your score will not know the difference, but your buddies will.

First Round With the Monsta Golf Ball – Shot a Monsta Score 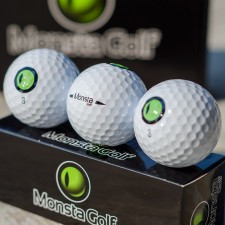 Boy am I thrilled to be able to play golf without wincing in pain on every shot.   Eight days ago I got a cortisone shot on the right tennis elbow.  Yesterday marked the first pain-free round I’ve had in 1.5 months.

Finally I had the chance to begin testing the new Monsta Golf balls, another premium golf ball offering from a small manufacturer.  This one can certainly compete with the big boys in terms of feel, performance, and durability.

I had intended to take a snap of the Monsta ball I played with yesterday, but now I can’t find the damn thing!  I played 18 holes with it, then lost it in my garage!  You’ll have to take my word for it.  The ball has almost NO sign of wear from 73 shots.  Ok sure, I don’t typically scuff golf balls with my putter, but you get the point.

More testing to go before I can post my review but initial results and impressions are that this is a great golf ball.  My +1 score of 73 would back that opinion up nicely.