Even Though I Lost This Match, Match Play is Still My Favorite Form of Golf

Yesterday I played my 3rd round of net match play for the 2016 Bonneville men’s club. Any rounds at this point are gravy since I’ve gotten my entry fee back. Today’s match was against a very good player, a 1-handicap. After blowing at 8-iron over the green on the par-5 first hole in two, I went one-down with a par. On the 2nd I 3-jacked (not normal for me) to go two-down. If I didn’t get my ass in gear this was going to be the world’s quickest 9-hole net match…

Fortunately I made two good shots to get to about 15 feet for birdie on the tough par-4 3rd. Made the putt to go 1-down.

My opponent, knowing I was getting a pop on the 4th hole, made about a 40 foot bomb for birdie to tie my net birdie. Still 1-down.

On the par-5 5th my opponent made an impressive par after hitting his drive in the lateral hazard to the right. My net birdie put the match back to even.

I screwed up on the par-3 6th. My opponent missed the green and made bogey. I ran my birdie putt by too far, too aggressive. Missed the downhill come back putt. Still even. Should have been 1-up.

On the par-4 7th I hit a killer approach right at the pin from 125. Hit landed, went up to the hole, then spun back about 25 feet. Bad luck there. Opponent makes birdie and I go 1-down.

On the short par-4 8th (about 330ish?) my opponent actually waited for the green to clear before teeing off. He made it to just short. I don’t have that shot in the bag so I hit my best shot of the day, a solid 4-iron. I hit an okay approach to about 20 feet and said “Houston, we have a problem.” A player as good as my opponent should make birdie from so close to the green and that’s just what he did. My birdie putt to extend the match just missed.

In the most entertainming moment of the match my opponent shook my hand and said, “nice match, Troy.”

He realized the name mistake and apologized, but not after I gave him some grief.

On the 9th, playing for fun, I made birdie. Of course…

I shot even par for the nine holes and lost 2-down. My opponent shot 3-under. I don’t feel too bad. That’s some damn good golf being played.

Even though I lost today, match play is still my favorite form of golf.

Not much time to think about this match. This afternoon I play my gross match, against a pro who is one of the best players in the association.

Fell Flat on My Face in Gross Match

In my previous posts I’ve discussed the Salt Lake City Amateur and how I feel a lot of pressure. Two days after that tournament I had to play a gross match against a 1.4 handicap opponent. I’ve not been playing to a level I expect from myself, so I had doubts as to my chances of victory.

I started out hot though. I made birdie on the first two holes, winning both. We tied the third hole and my opponent made birdie on the tough 4th, at which time I was just 1UP. We both had eagle putts on the par-5 5th and both two-putted. On the par-3 6th we both hit the green. I two-putted but my opponent missed a very short par-putt. Back to 2UP.

Then it got weird. On the short par-4 7th I hit a pushed drive down the right rough were there are some trees. Often the shot will finish in an okay position there, just a sand wedge to the green. My ball looked to hit right at the base of a tree and neither of us saw it bounce or go anywhere at that point. We searched for the allowed five minutes and the ball was nowhere to be found. I theorize the ball embedded into the tree somehow, or ended up climbing up and lodging high overhead. I had to go retee and ended up making a double. Back to 1UP.

I made a solid par on the par-4 8th and my opponent had tree trouble which produced a bogey. 2UP.

On the very difficult 195 yard par-3 9th I almost jarred my tee shot. It finished about four feet. I made birdie. 3UP.

Walking to the 11th tee with my 4-iron I stepped over a rope. Somehow my shoe caught the rope and I was not ready for that. I fell flat on my face and my ball, tee, and 4-iron went flying. I hurt my left wrist and left knee. Mostly I hurt my pride. Somehow I managed to hit a solid tee shot being a little shaken. I made par and my opponent made bogey. 4UP.

We both tied the par-5 12th. I got away with that one. He was a long hitter and was over the green in two. I made a clutch par saving downhill putt from about five feet.

I had a great opportunity on the 13th. My opponent made bogey and I ended up with a five footer uphill to win the hole and put the match to dormie. I should have been more aggressive. The putt tailed off and missed. That gave him life and he took advantage.

On the par-4 14th I made bogey and my opponent made an impressive birdie. 3UP.

On the par-3 15th from 225 I chunked a 4-iron. I then chunked my 2nd shot. At this point I’m beginning to battle the choke mechanism. I lose the damn hole to a bogey. Not impressive.

The 16th is a very reachable par-5. I knew my opponent would have a good shot at birdie or even eagle. He blocked his drive into the right rough and had a slight tree issue. I was a couple of feet in the left rough about 250 out. I hit a killer hybrid which crept onto the front of the big green, but the pin was back. My opponent blew his shot past the green nearly into some trees. He had no backswing. His third shot hit the rough behind the green and he chipped onto the green to about 15 feet. I was too conservative with my eagle putt and ended up 3-putting for a par. My opponent made a clutch putt to tie and keep the match alive. Dormie 2 (2UP with two holes to play).

At this point I’m getting nervous. He has the momentum after that clutch putt and clawing his way to dormie two from 4-down. He hit a stellar shot to the par-3 17th and had about 10 foot birdie putt. I gagged my tee shot and ended up short of the green. Would my nemesis chipping and bad short game lose this hole? Not if I use a Texas wedge! I putted from about 10 feet off the green to about four feet. My opponent missed his birdie and I gave him the par. That left me a slick left to right four footer for the win.

I shot -2 on the front nine with a double (the tree ball), and ended with my best round of the year, 74. It would seem I felt much less self-induced pressure in this match than in the City Am over the weekend.

Match play is without a doubt my favorite form of golf. The intensity and pressure of a one-on-one match like this is so fun. I should have had the match in the bag, being 4UP with five to play. But it’s very hard to not let your brain get in the way of finishing off the match in that position.

My next match is likely against an even better player, a +2.5. He’s human. I hope he brings his C game. 🙂

Quarterfinal Net Match – 5 Shots, a Rock, and a Cloud of Dust

I’ve said many times that match play is my favorite form of golf.  Despite losing a quarter final net match today I still do.  Today’s match was an uphill battle all the way.  The best part of my game, putting, was essentially nullified by newly punched and sanded greens. 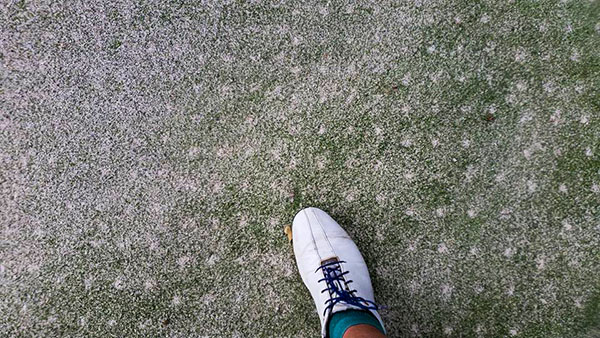 Making putts in these conditions is not about skill.  It is about luck.  I’m not good at taking a full swing with my putter and feeling the ball compress.  Just don’t have the right feel for it!

My opponent was a very nice chap from Colombia of all places.  We chatted about Bogota and my trip there was was fun.  Gross I beat him by four shots and he won the net match 2-and-1.  That’s what getting five shots will do for you.  I hope he does well in the next round.

I’m not mad this time around.  It just wasn’t in the cards, the clubs, the sky, the grass.

Oh yeah the rock, mentioned in the title of this post.  On the 7th hole I was in the left rough but in good shape since my opponent had a lost ball.  I hit pitching wedge and heard a horrid thwacking sound.  The ball went about 30 yards.  I looked into the divot and there was about a five inch rock underneath my ball.  My new Mizuno JPX-850 Forged pitching wedge broke the rock in half and took some bad battle scars.  That blows.

See ya next year match play.