Is Golf Sixes Really What The Sport Needs?

A shortened version of the typical 9-hole game has recently been introduced over in England as a means of apparently marketing the sport to a broader audience.

According to BBC Sport, Golf Sixes made its debut at St. Albans’ Centurions Club in early May, taking its inspiration -and many of its ideas- from the likes of Twenty20 cricket and Rugby Sevens, the latter of which was introduced as an Olympic Sport for the first time at last year’s Rio Games.

A Chance to Win new Fans

The idea, so says the BBC’s golf correspondent Iain Carter, is win back old fans and introduce many more new ones who were originally put off by the fact that the standard game takes a long time to play, and seemingly even longer to watch.

The article concludes that this is exactly what the sport needs right now, but is it really?

It’s a question that is certainly up for debate among some purists.

On the one hand, yes, anything that introduces more people to the sport can only be a good thing, especially with the potential to use Golf Sixes as something of a gateway to longer-form games.

That said, there are those who would argue that the suggestion that golf is currently suffering from some sort of image crisis is more than a little misguided.

Look no further than the world of sports betting.

In an age where everything is online, today’s online sports betting sites are using a wealth of tactics to attract new customers. This is particularly true back in England, where Golf Sixes has been introduced.

There exists a wealth of free bets offers UK fans can use to wager on just about any sport imaginable, but increasing numbers of them are doing so to bet on the Masters and the ongoing European Tour.

Elsewhere, for those interesting in enjoying the game without much of a vested financial interest, events at St. Andrews, Muirfield, and Hoylake remain popular.

Then again, maybe the sport is in dire need of an image make-over.

Last summer, it was reported that viewing figures for The Open plummeted by as much as 75%.

In Europe, this can at least be partially attributed to the event’s move from the free-to-view, license fee funded BBC, to the premium subscription service, Sky Sports. This is evidenced by the fact that BBc’s highlight show of the same event drew higher viewing figures than Sky’s actual live coverage.

Still, if a reduction in viewing figures is likely to be the norm from now on, then there’s undoubtedly a case to be made for Golf Sixes.

The game works by using a shot clock that gave each player forty seconds to take their shots. The time was then cut to 30 seconds for the second day knockout rounds.

The idea, according to Iain Carter, is that by doing so, fans and players alike can skip right to the engrossing shots “down the stretch,” eliminating all the long, drawn out early shots and getting right down into the exhilarating parts of the game.

When Golf Wagers Go Beyond Friendly 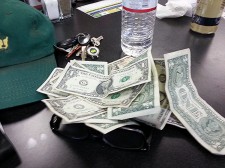 Most golfers like to have “friendly” wagers against their playing partners on the course.  There are hundreds of different golf betting games for said friendly wagers, and perhaps someday I’ll post them here as a fun resource for golfers.   It would take quite a while.

I’ve been involved in many “money” games over the years and had some crazy situations arise when emotions and tempers flare up.  Golf can do that, and in the heat of the moment we can make dumb choices.  For me a typical friendly bet is a $2 nassau, $1-$5 skins, and maybe a $5-10 overall low (net or gross) score wager.  With those numbers one might win a few bucks when playing well, or lose just a few when not playing well.

There is a point at which a friendly bet becomes not-so-friendly.  That’s the point where the money becomes the focus, rather than a friendly golf game with your buddies.  Putts which would normally be in the “friendship zone” and called good in match play are suddenly not good and must be putted out.  That’s a point in time where players can become irritated that their putts were not called good, and tempers can flare.

A friendly game is not one in which the losers go home pissed off at their friends because their round cost them too much money.  If that’s the case, the bets are too high or there have been too many presses.  When my friends play well to beat me, I have no problem shaking their hand, patting them on the back, and giving them their $4.00.  But if I have to hand over $50, along with green fees, I’m looking at $100 day.  That isn’t exaclty fun.

I’ve had some crazy bets and scenarios happen in my day, below are a couple of the most memorable.

Winning $150 with my pants down

Total take $150 and one pissed off former friend.

The bet too big to collect

Years ago on the driving range with a buddy we started a contest.  A quarter to each player on the range who could hit the targets out there.  This range had 50 gallon drums, old cars, and all sorts of targets.  We went back and forth hitting targets and betting.  Soon we started to do double-or-nothing bets.

The game moved to the practice putting green where it started at $1 per hole.  I started to win holes and my opponent doubled up the bet each time, figuring he would eventually win.  He didn’t.  The bets started to get out of hand.  $25, $50 etc…  It got to the point where the guy owed me $250.

“Double or nothing,” he said when down $250.  I told him that the game got out of control and I was not going to let it go any farther.  I was done.  He begged for one more bet, so I begrudgingly agreed and picked a hole some 100 feet away to insure we would both 2-putt and be done.

I made the putt.

I never collected the $500 from that day’s crazy practice bets.  I told the guy to forget it.  I can only hope he would have done the same for me, but I suspect he would have insisted on collecting.