The RX series is designed for golfers with a swing speed lower than 105 mph. When I’m on in the peak of the summer, I’m right at 105mph and usually play the regular Bridgestone Tour B330. The B330RX series is a good spring/fall/winter ball since it is a little softer.

Below is the official press release from Bridgestone Golf, describing the new 2016 RX’s.

Covington, Ga. –Bridgestone Golf, the #1 Ball-Fitter in Golf, is using what it has learned through more than 300,000 consumer golf ball fittings to produce the best tee-to-green performing balls ever made for amateur swing speeds.  Bridgestone’s new 2016 TOUR B330RX and TOUR B330RXS golf balls have been specifically engineered to produce longer drives and better spin around the green for players with swing speeds below 105 mph, using new proprietary AMATOUR Core and SlipRes Cover technologies.

Historically, distance and spin has been a “give and take” relationship. To increase distance off the tee, players had to sacrifice spin around the green and vice versa. With Bridgestone’s 2016 Tour B330RX family, that is not the case.

Bridgestone’s 2016 B330RX Family features Bridgestone’s new AMATOUR Core, a new engine of the golf ball, that is 28% softer than the average firm tour ball core, and utilizes a steeper gradient in softness from the inner part of the core to the outer region, resulting in faster ball speed and more reduced spin off the driver than ever before.  In fact, the proprietary gradient technology in its core allows Bridgestone to accomplish in one layer what its competitors accomplish in two or three, leading to a smoother energy transfer and more power generated by the B330RX and B330RXS balls.

The innovation doesn’t stop in the core. Both models have received an injection of greenside spin as well, thanks to Bridgestone’s new SlipRes Cover.  The SlipRes cover leads to increased friction that keeps the ball more stable on the clubface, which results in more spin on short shots.  Simultaneously, SlipRes has the reverse effect off the tee, lowering driver spin due to that type of impact’s recoiling force, leading to longer distance.

An added benefit to the new SlipRes Cover is increased durability.  Due in large part to the cover’s innovative self-repairing formulation, the new B330RX and B330RXS golf balls are more resistant to stains and abrasions than ever before.

“The claims we’re making may seem unbelievable, and I wouldn’t have believed them myself if I heard them without having witnessed them firsthand in our R&D testing,” said Adam Rehberg, Golf Ball Marketing – Bridgestone Golf, Inc.  “We witnessed significant distance increases over major competitors in robot testing, while providing improved greenside spin. The truth of the matter is these balls perform better than anything currently on the market for swing speeds below 105 mph and golfers will notice immediately when they put them in play.”

Killer Box from Bridgestone Golf Previews the 2016 B330 Models

This winter has been killing me with regards to getting to product reviews. The courses are closed, buried in as much as couple of feet of snow. The high temperature for about the last month has been below freezing. Spring can’t come soon enough. 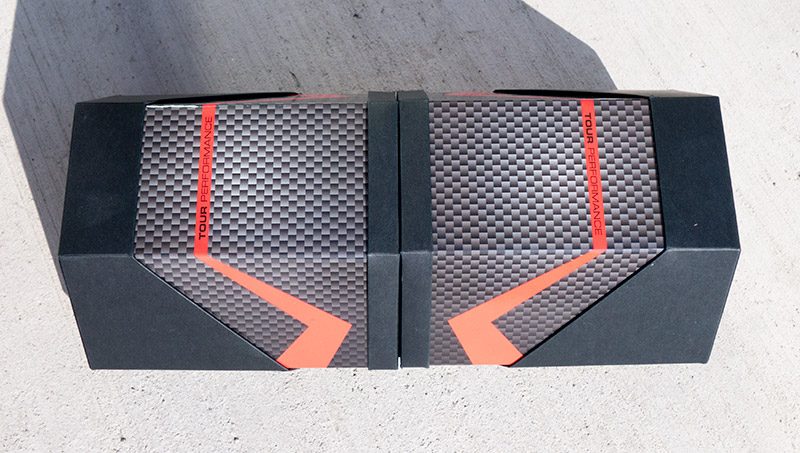 Last month I received an amazing promotional box from Bridgestone Golf. I knew no matter what was inside I’d dig it. As it turns out inside was a sample of each of their new B330 golf ball series, the B330, B330-S, B330RX, and B330RX-S. I would have posted these pics earlier, but there was an “embargo” on. That meant I had to wait for a certain date.

During the waiting the box became buried in a bunch of other products which came in for review. I finally got the chance to open it up today and take some pictures.

I do plan to review all of these balls after the snow melts. I’ll need to get my hands on more than one sleeve of each model though. I could lose a sleeve on the first hole of my home course, before I even get off the tee box.

This product review of the Bridgestone Golf J15 Driving Forged Irons came at a critical time in my golf game and my attitude.  Anyone who follows this blog and/or my social networks knows of the frustrations I’ve had of late with this beautifully infuriating game of golf.  More on the timing and attitude later.  First let’s take a look at the J15 Driving Forged Irons. 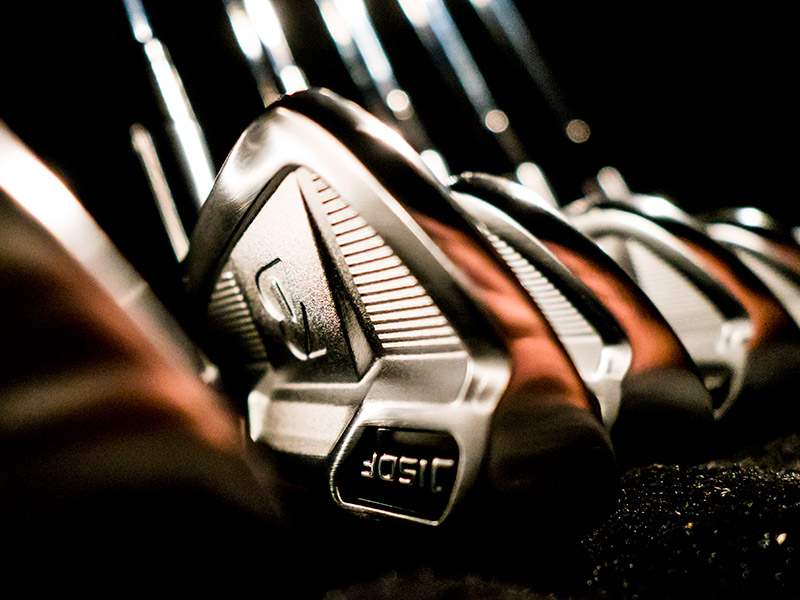 The J15 Driving Forged Irons are designed for golfers from the professional level to mid-handicap players.  I fall somewhere in that range as a player who varies from a 1-4 handicap, depending on the time of year.  So they should be a good fit.

The J15DF features a two-piece premium forged carbon steel design.  For those of you readers who don’t know what “forged” really means, it’s one of two primary manufacturing processes irons are typically made from.  The other process is called casting, producing “cast” clubs.  In my opinion forged clubs tend to have a softer feel and provide more “feedback” to the player than cast.  Feedback would be the feel and sound translated to the player from the club.  Feedback gives the player great information with regards to the quality of contact and where it occurs on the club face.  Better players can translate this feedback into how they need to adjust for better contact.   Cast irons on the other hand, don’t often produce this feel.  Most shots, regardless of where they happen on the club face, feel about the same.

These irons feature a “hidden” cavity between the front and the rear of the club head.  This design employs “FAST” technology, or Flex Action Speed Technology.  The cavity and design allows the club’s weight to be moved out toward the perimeter.  Perimeter weighting (another buzz term in the golf industry) provides more forgiveness.

The sole of the club is a little narrower than game improvement clubs (clubs which are meant for higher handicap players).  “Mid Sure Contact Sole” design allows the club to be consistent in the way it interacts and bounces off of the ground. 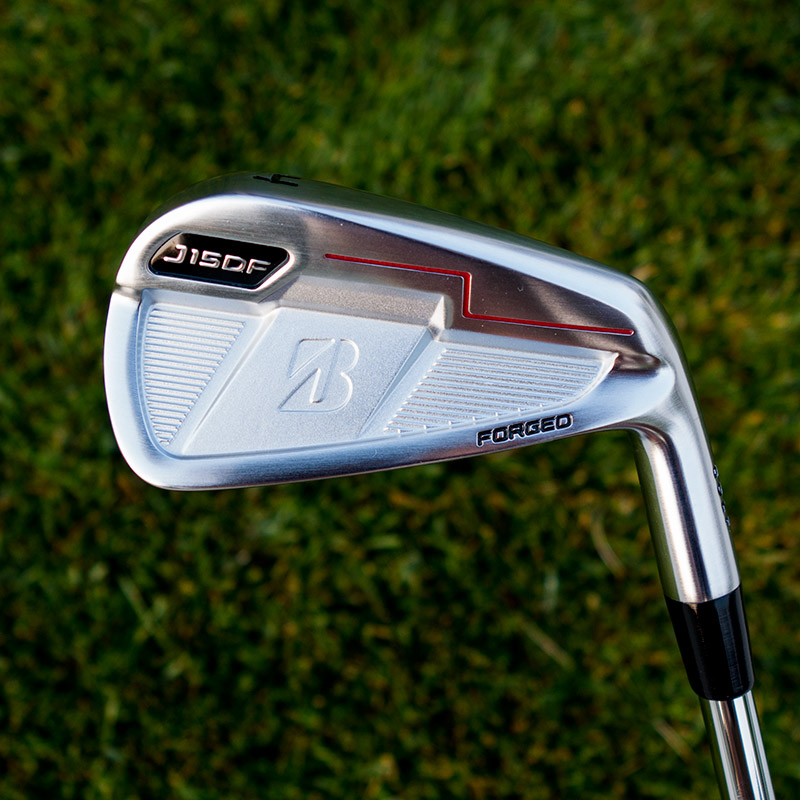 This club is available in right-hand only. Sorry lefties. You’re missing out. While the specs above show a 3-iron, the set I tested is a 4-PW.

A club fitting would help in the setup decision making process without a doubt. I recommend making sure your shafts, lofts, lengths, and lies are all set for your swing. If you already know your specs, you can actually order your exact setup online at the Bridgestone Golf J15 page.

There are well over 20 shaft options available. I ended up with the True Temper Dynamic Gold Pro S300, the stock shafts. They’re fantastic.

The J15DF online configurator offers a choice of 14 grips. The model I’m gaming is the Golf Pride Tour Velvet. While they seemed a bit hard at first, I’ve grown to really like them. I’ll be reviewing the grips in a separate article later.

From the first club I hit on the range (still remember it was a 7-iron), to the last one I hit yesterday, I’ve been thrilled with these irons.  I have the opportunity to play many of the world’s best irons from most of the major brands, many custom made.  None of those other irons but the J15DF’s have come close to the feel and control I grew accustomed to with my hand forged set of Hogan irons from nearly 15 years ago.  The feel is butter.

Unlike the old school irons though, these are easier to hit and much longer.  I’ve enjoyed very solid iron length and accuracy since putting the J15DF in the bag.  The control these irons offer is tremendous.  Whether I want to hit a low driving punch 5-iron like I did a few days ago on the par-3 11th to eight feet, or hit a high fade with a 7-iron, these clubs respond.

That high fade with a 7-iron came yesterday, probably my shot of the month.  It was my 2nd shot on the 510 yard par-5 7th.  I was 184 out and needed to carry the shot over some front bunkers and have it release to a back-right pin.  The shot was one of the most pure shots I’ve ever hit and the ball landed within inches of my intended landing spot over one of the bunkers.  It released up a slope in the green and finished at 12 inches from the hole for a tap-in eagle.   That came at a time when my partner and I had just been pressed on the front nine.  #winner

There are many stories I could tell like the 7-iron above, and with the J15DF’s in the bag there will surely be many more.

I mentioned the critical timing in my opener.  You see, I’ve been struggling so much with my game I was close to quitting.  Not just for a week or two, or for the winter, but forever.  I’d had it.  Then the J15DF’s came in for review.  I was very close to declining the review and quitting.  Out of respect for Bridgestone and how great they’ve been to HOG over the years I decided to do the review. The J15DF irons gave my game a badly needed spark.  They talked me off the proverbial golf cliff.

Now that I’ve become excited about hitting quality iron shots again, winter looms unfortunately.  I’ll be trying to get in as many rounds with these irons as I can until the snow flies.

Bridgestone may be better known for their golf ball products, but you’d be making a mistake if you didn’t check them out before making an iron buying decision.  The Bridgestone Golf J15DF irons provide ultimate distance, control, and feel for golfers of mid-level handicaps and better.   I know exactly where I’m hitting it on the club face because of their fantastic feel and feedback.  I know if I execute shots well with these clubs, the results will be tremendous.

I’m not sure what’s more fun, setting up my golf club glam shot photo shoots, or testing great golf clubs.  Today we are getting a first look at the new Bridgestone Golf J15 Driving Forged Irons, or J15DF.

I will start testing these irons soon, and post a review when I’ve got enough rounds with them to give a proper evaluation. Translation: I’m not going to hit three 7-irons on the driving range and rave about how great they are…

Bridgestone Golf has been doing a lot with dimple design in their eSeries.  The eSeries includes the e5, e6, and e7.   Previously, they did a dimple-in-dimple design, which carried over into their tour balls, the B300 series.  I’ve enjoyed the performance of said dimple pattern in the B330 model.

I just received some samples of the new eSeries for 2015 which feature an even more interesting dimple pattern. Below is a photo of the neat sample box.

These balls have a flower-leaf-like pattern where there are circular dimples in the center with irregular hexagon shaped leaves around them. Bridgestone calls it “Web Dimple” technology. The circular dimple still features the dimple-in-dimple pattern. See the image below, with the hexagonal leave shaped dimples highlighted. 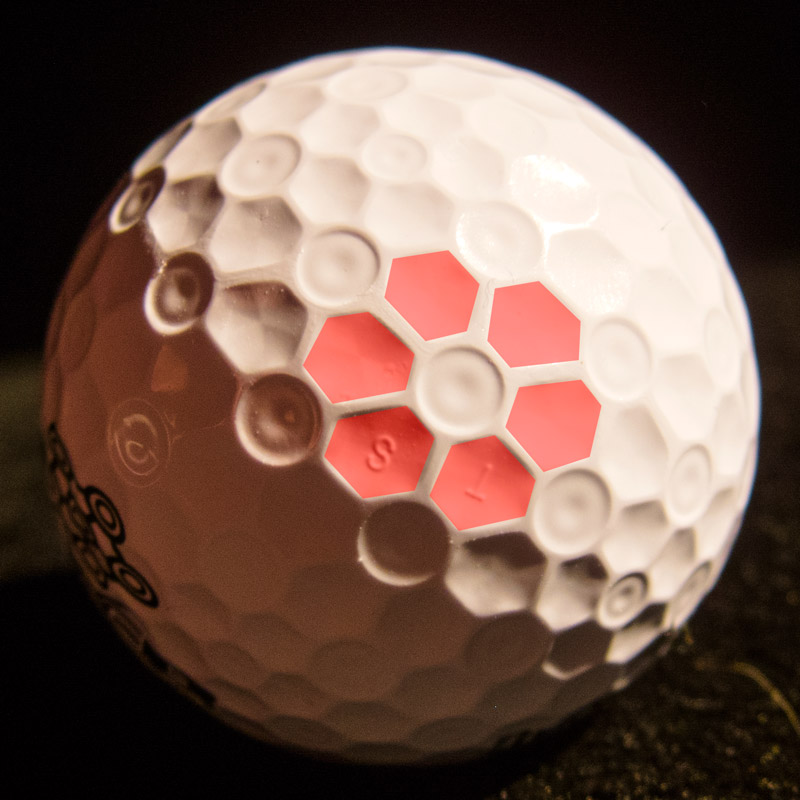 The dimple patterns between the e5, e6, and e7 are slightly different to the naked eye. That’s likely how they get the different flight characteristics.

Look for my reviews of the 2015 Bridgestone Golf eSeries golf balls later this spring.