2018 Net Matchplay Round Two – It All Clicked

It’s matchplay season. Matchplay is my favorite form of golf. I love to compete head to head.  Today was the 2nd round of net match play.  I made it to round two by narrowly coming away with a win in round one.

Today’s round was different.  I was paired up against my all-time best golf pal, Arnie.  Arnie is not a long hitter but is a master of the short game.  I had to give him two shots so I knew I needed to get out to a lead quickly.

Arnie played very well today, and was 1-over going into the 7th hole.  One problem for him however, was that today I managed to put together all the aspects of my game.  I was a buzzsaw.  I was -3 after six holes, gross.  On the 7th I nearly chipped in for birdie, with the ball rattling around in the hole before ending up on the lip.  That par sealed it. 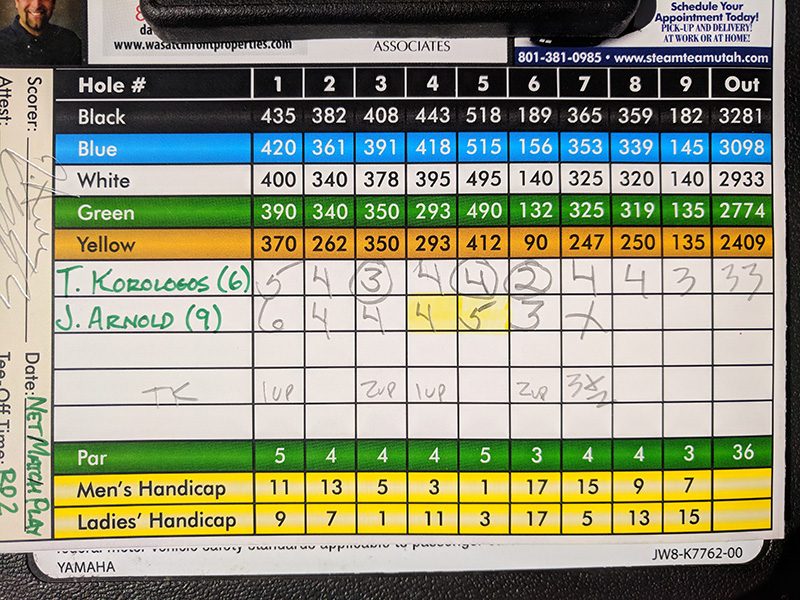 I finished out the nine with two pars, giving me a -3 33.  No bogeys.  That’s the best nine-hole stretch I’ve played in years. I’m thrilled to have put together a solid round finally.  I have been working quite a bit on all parts of my game through the spring.

I also should mention I’m testing some new equipment, which after today has solidified its place in the gamer bag for now.  The new items are the Cobra Golf King F8 driver, New Level Golf 1031 forged irons, and the Srixon Z-Star golf ball.  I’m getting more and more used to the driver and the irons.

I hit 7 of 9 greens in regulation. The two I missed were both approaches with a 9-iron which flew the green.  I have yet to dial in exactly how long the New Level 1031 irons go.  The 9-iron definitely is longer than my old ones. I say “ones” plural intentionally.

Today was just one round.  I don’t expect to show up to 9-hole league tomorrow and shoot a 33 again.  Not saying it isn’t possible, but the game has taught me to temper my expectations.  But today showed many positives across the board which helps give me confidence that my game is going the right direction.

In short, I’m not quitting golf….. this week.