This Trump global warming is great for my golf game. Normally all the courses here in northern Utah would be closed and under a deep blanket of snow, but instead the temps are around 50 degrees and there’s grass! So I hung up the skis and got the sticks out yesterday and played my first round of golf for 2018, a 9-holer at River Oaks. River is my former and about to be current home course again, since moved to within a wedge of the 8th tee a couple of months ago. 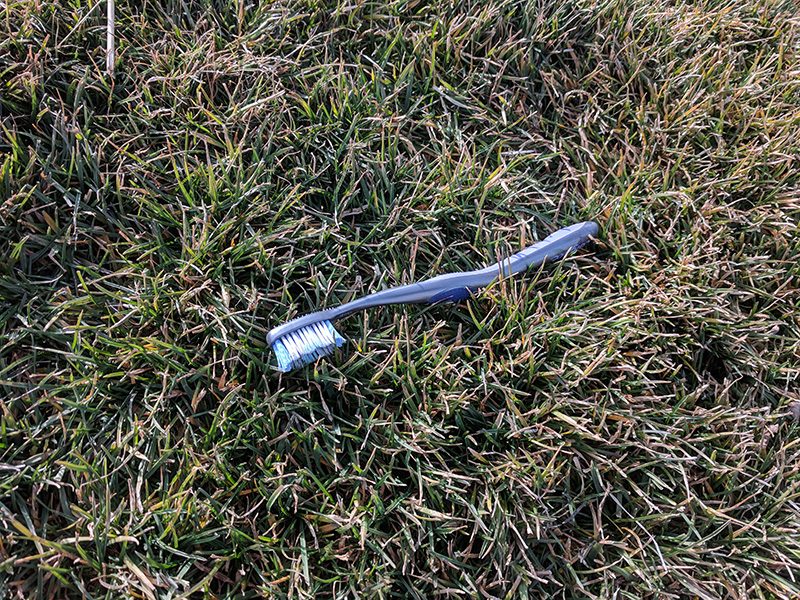 On the first tee I found the subject of the first 2018 “Random Stuff You Find on the Golf Course” post, someone’s toothbrush.  What’s the story behind this? Was a passer by brushing his/her teeth and dropped it? Was a golfer in such a rush from his house to the first tee that he was still brushing his teeth, then so mad about hitting that first ball in the water on the right forgot to pick up the tooth brush?  Did someone’s woman throw his toothbrush out the window of a nearby apartment after she found out he was using his apparent girlfriend’s toothbrush? We may never know.

I made birdie on the first hole of the year. So there’s that.  I thought of quitting for the rest of 2018 at that point. I’d be -1 for the year!

That 1-putt birdie on the first hole would be the first of FIVE 1-putts for the nine holes! I managed a double along with seven pars to go with it for a surprising 36 (one over par as the front nine is a par-35).  13 putts, 1.44 putts per hole average.  Found 4/6 fairways but the two I missed were only by a couple of feet.

I’ll take that for January and a cold, tight swing.  Actually it wasn’t even that cold. I had to take off my beanie and my outer layer because I was too hot.  I’m playing 18 today at a nice country club. I wonder if there will be any additions to the “Random Stuff You Find on the Golf Course” story there.