On the recent HOG World Tour stop in northern Michigan I had the pleasure of staying at Forest Dunes resort, and playing the unique Tom Doak designed reversible course there called The Loop. Check out my review of The Loop. 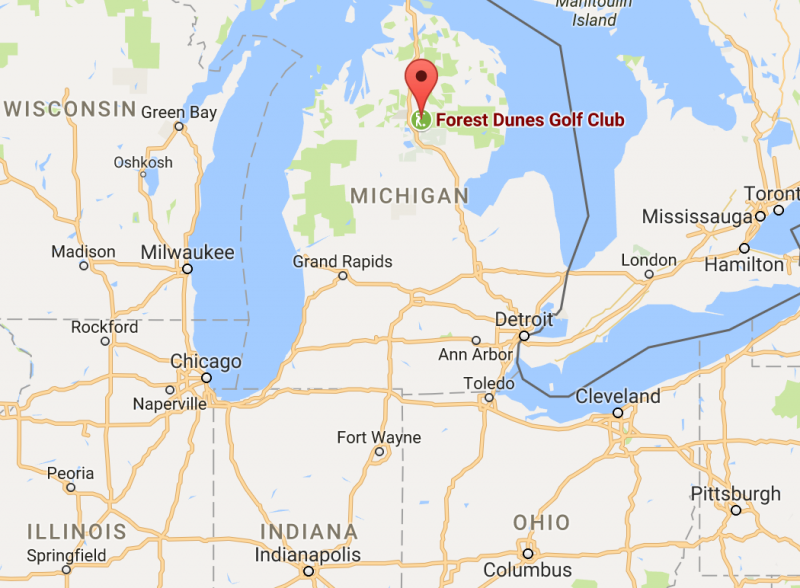 A Tale of Two Nines – Forest and Dunes

The front nine (Forest) is carved through some fairly dense northern Michigan trees in more of a traditional American parkland style of golf, less links influence. So there’s more carrying the ball and little running up shots. Due to the dense trees lining most holes, each hole is isolated. No parallel holes. It’s quite serene.

The back nine (Dunes) exits the forest and turns to a more rugged and exposed experience.  The dunes on the back feature large sandy waste areas and native vegetation which line and sometimes cross the fairways and surround the greens.

Speaking of serenity… Forest Dunes occupies about 500 acres and there are no homes on the course.

The look and feel from the tee of the Weiskopf course is very pleasing to the eye. Most often it’s WYSIWYG (what you see is what you get). Tee shots need to be fairly accurate or they’ll end up in the dense forest, waste areas, water hazards, or some of the terrific fairway bunkering.  There are a few situations where from the tee one doesn’t realize there are two different paths to take, split fairways.  A better familiarization with the course would really help in those situations. 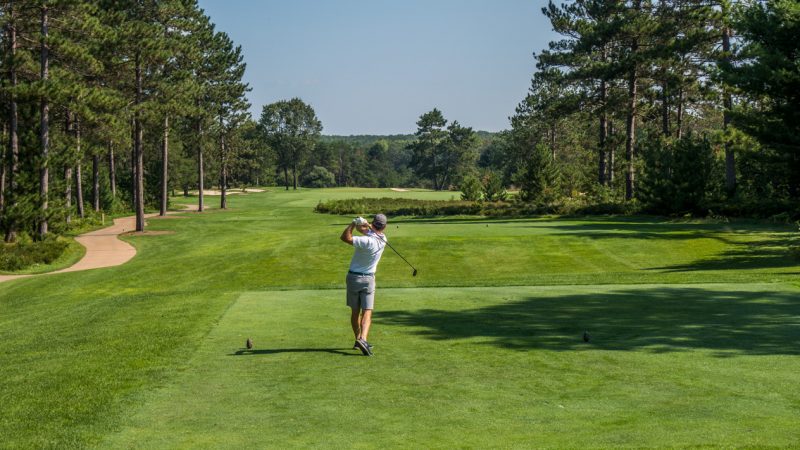 There’s also a nice bit of elevation change from tee to fairway or tee to green on the front nine. The elevation changes make the tee shots even more interesting.  More rolling hills and dunes are on the back, which hide some of the native areas.

The fairways on the Weiskopf course were in terrific condition when I played there, and I found most of them thankfully. Only on the 9th did I run into tree issues. Lies on the shortgrass were like lies on high quality carpet. The only difference is you don’t want to take a divot out of high quality carpet. It won’t grow back. 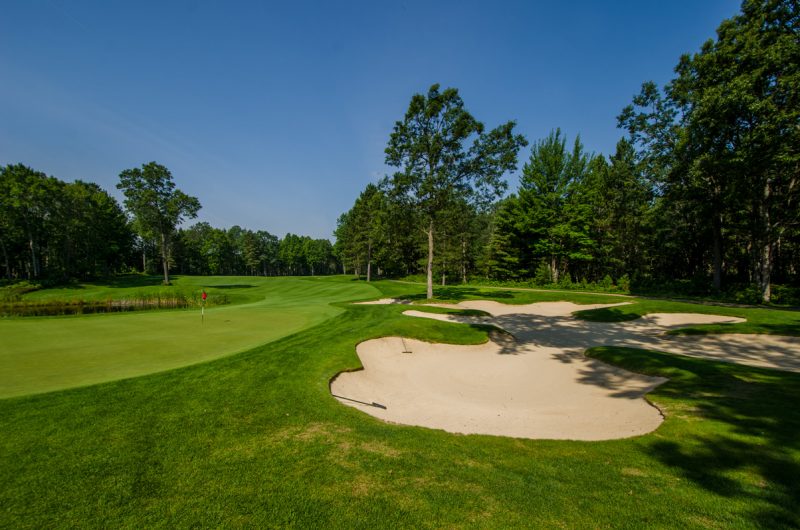 Most of the fairways are not terribly penal or unforgiving. There can be positions in the fairway which are not optimal; ones that perhaps bring overhanging trees into play or bad angles to the green. A little course knowledge helps for those situations. Same goes with some of the small native areas and waste areas which can jut out from the sides of some of the fairways, especially on the back nine.

I really enjoyed the green complexes at Forest Dunes. Many of the greenside bunkers are Robert Trent Jones Sr.-like large. There can also be more rugged bunkering with native grasses around the edges and less pristine and precision in the shaping on the back.

Some greens are guarded by forced carries, water, and of course sand, so flying it all the way in those situations is required. Other greens offer options for chipping, pitching, or even putting off the surface (one of my favorite shots because chipping is one of my least favorite shots). 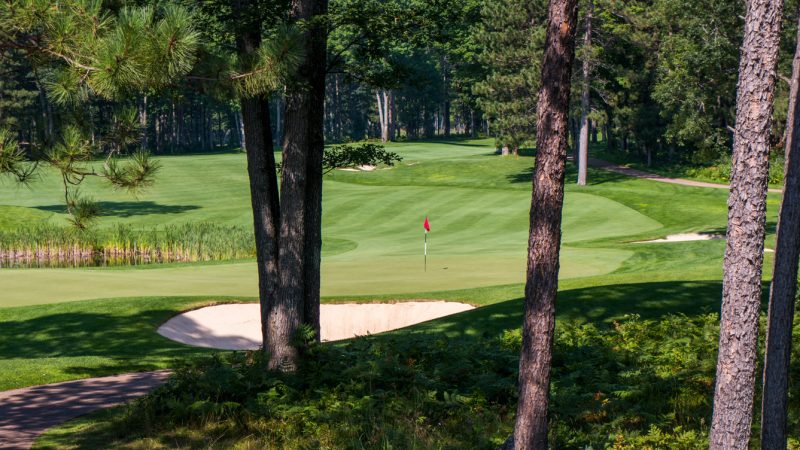 Despite the fact that I couldn’t make any putt for birdie inside of 10 feet, and there were a lot of them, I still enjoyed the putting surfaces. They rolled very true and well. Putts that were on line dropped but puts, like mine, that were off by even a fraction of an inch, did not.

One very unique feature at the Wekskopf course is the 19th hole. No that doesn’t refer to the bar. The bar is the 20th! 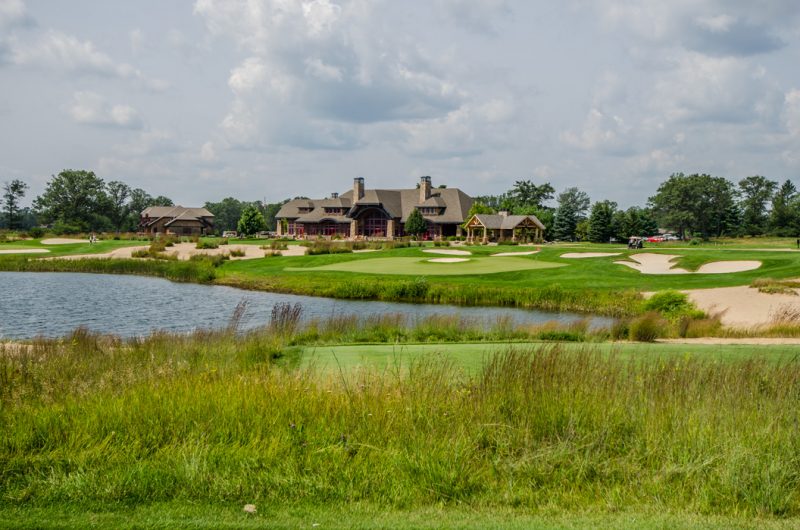 The 19th is a short par-3 which is used to settle matches or bets in the event that there’s a tie after the 18th is completed. What a cool idea.  My group was hitting sand wedges into the green but it looked like the hole could be stretched out a bit more.  One fun part, hard to see in the photo above, is the bunker in the middle of the green which made the green’s shape like a donut.

Forest Dunes has a tremendous practice facility. From numerous practice greens to a solid and interesting driving range to a very detailed and creative short game area. The answers to your game’s issues are there somewhere.

I also noticed a putting course which had just been seeded. I imagine it will be fully operational by the 2018 season, if not sooner.

The clubhouse is large and elegantly appointed inside and out. Inside the clubhouse are a few rooms, a restaurant, and the pro shop. The shop is fully stocked with great gear and apparel. 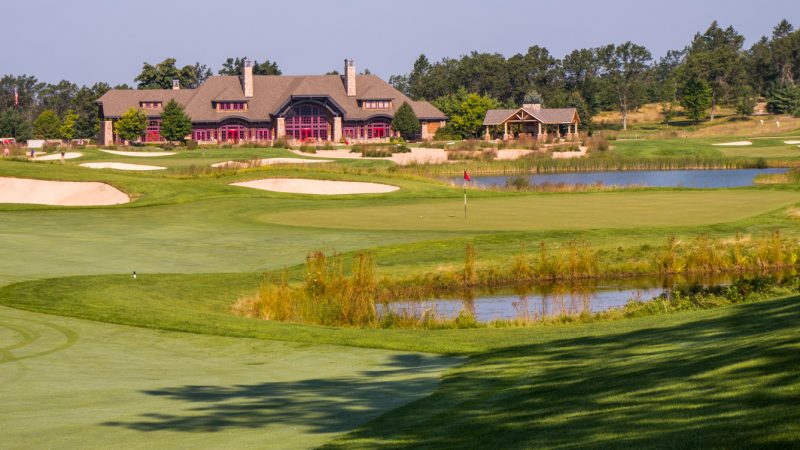 The clubhouse as seen from the 18th fairway

I enjoyed several great meals in the restaurant. Two of them were smoked filet mignons with baked potato and French onion soup.  The reason I had a second one was because the first one was so good.  No, they weren’t at the same sitting.

In addition to the rooms in the clubhouse, there are “villas” which are about a one minute walk from the clubhouse or any of the courses’ first tees. The villas have numerous rooms, with shared living space. Each room has its own shower. The shared living space in the villas feature large cushy reclining chairs, couches, a large flatscreen TV, kitchen, microwave, refrigerator, and kitchen table. 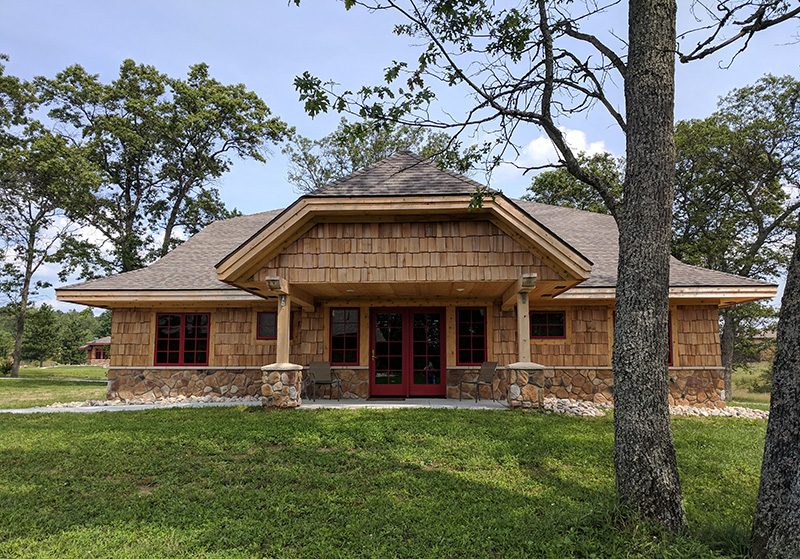 I stayed in one of the villas (photo above) and loved it, sans a closet or somewhere to hang up my expensive golf shirts.

I had a fantastic time taking on the challenge of Forest Dunes Golf Club. The variation between nines, immaculate conditioning and maintenance, and fabulous design made it one of my favorite golf experiences of the year.

Forget boring flat Florida golf or the other traditional golf travel locations. The Loop and Forest Dunes golf club are the perfect recipe for a memorable golf buddy trip.

The Loop at Forest Dunes review